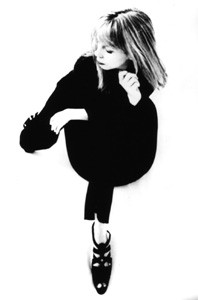 Swing Out Sister: Rickie’s in love with the human race.

Don’t that beat all? In the aftermath of the 9-11 terrorist attacks, I wondered in these pages who would step forward to help make sense of the stifling life during wartime and the prickly political repression that swept America. Most recording artists–including Neil Young, Bono and the Boss–rallied around the flag. Then, in an unexpected move, Rickie Lee Jones stepped up to the plate.

In October, almost two years to the day after the attacks, the consummate bohemian singer best known for her 1979 jazz-inflected hit single “Chuck E.’s in Love” delivered The Evening of My Best Day (V2), a meditation on love, life and death in the post-9-11 era. It’s her first album of new studio tracks in six years. Three of the songs–“Ugly Man,” “Little Mysteries” and “Tell Somebody (Repeal the Patriot Act Now)”–are grounded in political expression and set the tone for this rather amazing album.

When asked about her reemergence after a lengthy hiatus from the studio, Jones told writer Paul Zollo in the April issue of Acoustic Guitar magazine, “I was listening. I was waiting. I was praying to be restored. And that’s what happened. I feel powerful now. Intact. Ready to heal the world.”

Indeed, the songs are a soothing balm for these strange days.

Yet the album finds Jones viewing the harsh realities of life, including death and despair, through the eyes of a dreamer who evokes a childlike fascination while offering an existential perspective on the big picture. It’s little wonder that The New Yorker once said of Jones that “Her music is the aural equivalent of painter Georgia O’Keeffe’s most rigorous and beautiful canvases.”

Many of these songs are sonically imbued with what Joni Mitchell might call the hissing of summer lawns, an intoxicating ride through a scintillating and sometime sensuous soundscape stripped of all clichés and polemic. Others, like the wistful “Sailor Song” and “A Tree on Allenford,” are dark, transcendent ballads that rival anything Jones has recorded in the past.

These pop arrangements are often tinged with splashes of late-’60s and early-’70s soul, jazz and gospel, aided by a crack core band and such guests as guitarist Bill Frisell, David Hidalgo of Los Lobos, jazz master Nels Cline, bassist Mike Watt, and singers Syd Straw and Grant Lee Phillips. Sometimes, Jones’ voice flutters above the evocative instrumentation like a leaf floating on the summer breeze. At other times, she and co-producer David Kalish blend the vocals tightly with horn arrangements that give her words significant punch.

Lyrically, this is Jones at her best. In “Ugly Man,” a laid-back jazz song that opens the album, she shreds George Bush, excoriating the president for his bullying ways and extoll-ing the listener to take back the country. In “Little Mysteries,” with its engaging ’70s soul-funk rhythms, Jones prowls on cat paws as she takes on the Republican Party and “the boys from Texas” for stealing the 2000 presidential election. “Tell Somebody (Repeal the Patriot Act Now)” is a Tony Joe White-style southern blues, a sort of politicized “Polk Salad Annie,” that urges her fans “to tell somebody what happened in the U.S.A.” and points out that “it only took a moment” for free speech to fade under this administration.

And when was the last time you heard a pop song that contains a line like “Tell somebody that democracy is only as good as the voices of protest that she protects” and makes it sound funky?

Yet ultimately, it is the mix of soul-searching ballads and strong political material that makes this such a brave and compelling album. “This [CD] addresses love for the human race,” music critic Thom Jurek has marveled. “It is alternately intimate and cinematic–in an indie-film way–and it is breathtakingly, unapologetically and unmistakably moving and true and elegant. And does it ever swing!”

The Holmes Brothers, Simple Truths (Alligator)
New York-based blues and gospel singers the Holmes Brothers–Sherman and Wendell Holmes, and Popsy Dixon–are nothing short of revelatory on this follow-up to their critically acclaimed 2001 Joan Osborne-produced CD Speaking in Tongues. Craig Street (who produced Norah Jones’ Come Away with Me) gives the Brothers plenty of room to breath while hitting just the right groove on this collection of mostly rootsy covers by Bob Marley, Hank Williams, Townes Van Zandt, Willie Nelson and Gillian Welch, among others. A serious shot of soul salvation.
–G.C.