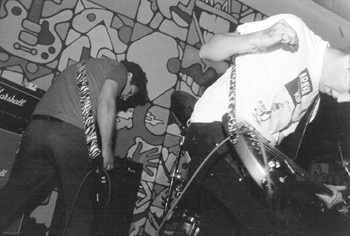 TKO: With a new CD just released, Fight Like Fight call it quits.

With an album in the can, Fight Like Fight give a long kiss goodnight

This friend of mine is always sending me e-mails asking if I have heard of this band or that band. He’s under the impression that I know about these things, when in reality I’ve spent the last week listening primarily to the boxed set of songs from Sesame Street.

“Do you know anything about a band called Escape Engine?” he wrote a few months ago.

A few days later, I got this e-mail from him: “I downloaded songs from both Escape Engines. I like the one here better. The girl sings like she’s about ready to cry.”

That girl–Ashley Scheiding, Fight Like Fight’s vocalist and guitarist–does sing like she’s about ready to cry. Either that or punch someone’s lights out. In raspy tones that go from pleading to demanding in split seconds, Scheiding’s spur-laden vocals are the embodiment of a dangerous vulnerability on the point of breaking. They’re one of the most distinctive elements of the album Your Critics Desperately Need You, which the band released early last month.

The album will be around for a while; the band, however, won’t be. After putting in a few good years, Fight Like Fight is throwing in the towel. Not to be melodramatic, but FLF’s gradual demise is a sadly common story among bands: rock out, work hard, seek outside support and don’t get it, spend money to put a recording out yourselves, decide to call it quits not long after said recording hits the streets and wind up with a few hundred CDs in your closet.

“We’re not good at doing the behind-the-scenes stuff,” says guitarist Greg Kelly. “Either we can’t do it or won’t do it, but after two and a half years of having band meetings and talking about everything that needs to happen and generally having nothing happen, I got burned out. I think a lot of bands don’t know what has to go into it to actually move up in the world.”

That’s not to say that Fight Like Fight are lazy. They’ve played a steady stream of shows in the Bay Area, toured the Northwest and built up a strong local following. And Your Critics Desperately Need You (recorded last March at Grizzly Studios) froths at the mouth with potential. It’s got the frustrated introspective lyrics, angular guitars and complex drumming that the emo kids, in all of their despondency, so crave. The songs show a greater level of musicality and experimental finesse than their 2002 split EP with the Set Up (who likewise had to change their name and are now the Polar Bears), and there are calmer, almost postrock recesses of sound hiding out in between the aggressive screeches.

Before forming Escape Engine in 2001, Scheiding and Kelly had played together in Sometimes Y, while drummer Ian Anderson and bassist Jamal White were in the almost hyperactively eclectic Life in Braille. While gearing up for Your Critics Desperately Need You, the band underwent the name change to differentiate them from that other Escape Engine.

One of Fight Like Fight’s biggest setbacks was that prior to the album’s release, their label, Trash City Unlimited, went under and the band had to finance the record themselves. Still, before playing their last shows in early spring, they plan to record five more songs in the home studio of the Rum Diary’s Daniel McKenzie. “In theory, it’s probably some of our best stuff,” Kelly says.

Another hallmark of the breakup cycle: just when a band starts to get really good, they call it quits. But at least they’ll leave a goodbye present.