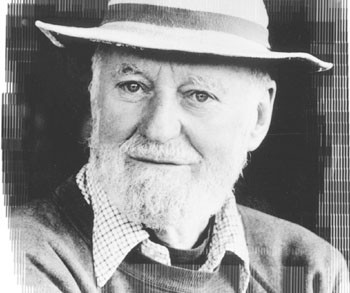 Mover and shaker: Beat-poetry luminary Lawrence Ferlinghetti will make a Sept. 9 appearance at a Petaluma fundraiser to stump for a pair of local literary events.

LAWRENCE FERLINGHETTI is an icon. But you know that. A motivated mover and shaker since the early days of the Beat movement, Ferlinghetti, 82, has been a legendary figure longer than you’ve been alive (I’m guessing).

His role in founding San Francisco’s City Lights Bookstore–a beatnik mecca that still draws pilgrims from around the world–has elevated him in literary circles to quasi-sainthood, a reputation heightened by the fact that he was also the publisher of Allen Ginsberg’s landmark poem Howl.

That Ferlinghetti fought, and won, a famous court battle to keep Howl from the paper-shredding claws of the government censors who labeled it pornographic casts a superhero glow onto his already immortal image.

His relationship to Ginsberg is almost enough to blind one’s eyes to the fact that Lawrence Ferlinghetti, savior of the Beat poets, is a damn fine poet himself. After all, he did write Pictures of the Gone World and A Coney Island of the Mind, poem collections that have sold over a million copies since appearing in the 1950s.

It’s obvious that without Ferlinghetti’s bookselling, Howl-publishing, First Amendment-defending efforts, the literary world would be a different place. But what about Ferlinghetti the poet?

What would the world be like had he never put pen to paper?

“Oh, there’d be an enormous gap if [Ferlinghetti] had never written and published,” says Sebastopol poet David Bromige, a Sonoma State University professor who drew early inspiration from Ferlinghetti’s work. “He moved things forward, pushing toward a poetry of the vernacular, a poetry that reflected the attitudes that went with that vernacular.”

HIS POEMS felt casual and free, injected with a playful irreverence that was both intellectual and mainstream, breaking ground and leading the way for successive generations of Bob Dylans and Snoop Doggy Dogs.

“With Pictures of a Gone World,” recalls Bromige, “Ferlinghetti wrote with a graceful vernacular that we weren’t accustomed to seeing previous to that. His first books made a big impression on me. I soaked them up. Each one broke new territory.”

The good news is, Ferlinghetti is still breaking new territory.

On Sept. 9, the poet/icon will take the stage at the Phoenix Theatre in Petaluma for “Rhyme, Rhythm and Song,” a fundraiser for two upcoming Sonoma County literary events–the Sonoma County Book Fair and the Petaluma Poetry Walk (see “Word Up“).

“Rhyme, Rhythm, and Song” features live readings by an assortment of Bay Area poets, including Gene Ruggles, Geri Digiorno, Jonah Raskin, Joyce Jenkins, Patti Trimble, and Sharon Doubiago. Each reading will be backed up by a live local musician. Blues mistress Sarah Baker, on keyboard, will perform with Ferlinghetti.

Bromige, who will likely be in the front row of the audience, is looking forward to seeing Ferlinghetti.

“He has an amusing style of reading,” Bromige notes. “Or did the last time I saw him. His voice can sometimes take on the inflection of an old-time comedian, like W.C. Fields.”

“What I’ve admired most about Ferlinghetti from the very first poems I ever read,” Bromige says, “was that his concepts were not simple concepts. His work was never intended for simpletons. And yet there’s so much pleasure and playfulness in the words, you don’t have to be a genius to enjoy them.”