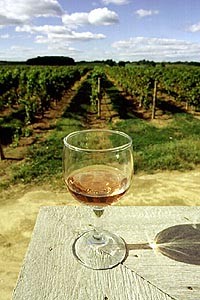 Fruit of the Vine

Organic wines fight for respect in the marketplace

PICTURE THIS: On a moonlit night after a hard day, you pour yourself some wine, swirl it around the glass. Raising it slowly to your lips, you notice the crisp redolence of fruit and accents of oak-spice. The wine’s fresh acidity coats the tongue, followed by an aggressively ripe fruit bouquet and dry finish. You polish it off, but instead of finding yourself lulled into a pleasant state of relaxation and calm, you are instead assaulted by a pounding headache.

Unbeknownst to you, it wasn’t your workday beating you senseless, it was the wine. For many people, this is an all-too-common occurrence. Headaches or other ailments that arise after wine consumption usually have less to do with the alcohol and more to do with the unseen chemicals floating in the glass.

On The Shelf: A sampling of North Bay organic wines.

Studies show that wine grapes are bombarded with a medley of poisons. In fact, 17 different insecticides, herbicides, and fumigants are used in wine production, many containing possible carcinogens. In California, where 90 percent of domestic wines are produced, grapes receive more pesticides than any other crop: 59 million pounds in 1995 alone, according to Californians for Pesticide Reform. In Sonoma County, grape growers applied chemicals to their crops at twice the state average, and anecdotal evidence indicates that the amount is rising in the North Bay in the wake of a possible infestation by the glassy-winged sharpshooter, a pest that carries the vine-withering Pierce’s disease.

So it’s no surprise that grape production accounts for a full third of all pesticide-associated illness in the state, most more serious than headaches. Since tending to the vines involves considerable contact with foliage, most illnesses are suffered by workers exposed to pesticide residue. Typically, grape laborers experience dermatitis, an inflammation of the skin, at a rate 10 times higher than other agricultural workers. But farm hands aren’t the only people suffering: according to a Californians for Pesticide Reform study, there is also a link between pesticide use and increased birth defects among both farmers and nonfarmers residing in these agricultural regions.

The problems aren’t unique to California, either. Pesticide use here is typical of most conventional vineyards worldwide, says Michel Ginoulhac, vice president and winemaker for the Organic Wine Co. What’s more–and here’s where your headache comes in–minute traces of these toxins often find their way into your glass.

“The levels aren’t dangerous in the bottle,” says Ginoulhac, who is also a medical doctor. “The problem is their cumulative effect.” Many pesticides are stored in the body’s tissues and accumulate over time, thereby magnifying the danger. Ginoulhac says this may explain why many people, especially older individuals, experience headaches or other maladies after drinking wine.

“This doesn’t happen with organic wines,” Ginoulhac says, and with good reason. In most organic vineyards, compost has replaced fertilizers, biological control has replaced pesticides, and the use of any synthetic chemical is strictly prohibited. In addition, cover crops, which are commonly used to sustain populations of beneficial predatory insects, promote biological diversity and prevent soil erosion.

For many organic vineyards, this ecological philosophy extends to more than the wine itself. Fetzer Vineyards’ Bonterra wines are bottled in 50 percent recycled glass, and its labels are printed with a soy-based ink on tree-free papers. The Bonterra wines have found a receptive market in Great Britain, where consumers have faced repeated scares over the safety of their food stuff–50 percent of Bonterra wines are sold in England, according to Fetzer spokeswoman Sarah Cummings. To ward off pests, Gallo of Sonoma coats its roads with a natural wood-based resin that deters mites and dust, and develops only half its acreage, leaving the rest untouched to promote biological diversity. And neither Four Chimneys Farm Winery in Himrod, N.Y., nor Fetzer uses any animal products in its wines, including bull’s blood, gelatin, or egg whites, although these are all FDA-approved additives.

Vines of the Times

Veronique Raskin, founder of the Organic Wine Co., can recall a time when the very mention of organic wine would induce either shock or laughter. “Organic was a dirty word,” she says of the early 1980s, when she walked from store to store trying to persuade buyers to carry the stuff. “It was associated with hippies, grass, LSD. Very few people knew what it was.”

Although organic wine makes up only 1 percent of the total domestic wine market, the industry is experiencing a steady annual growth of 20 percent. Organic winemakers and enthusiasts alike expect, with the recent upswing in environmentally conscious consumers, that organic wines will make up half of the total wine market within the next two decades.

Grape growers throughout California have moved in that direction, industry sources say. Now many grape growers have shifted toward sustainable and, in some cases, complete organic growing. For Raskin, it’s a lot easier than it was a decade ago: “The organic wine industry is expanding in all directions,” she says, “in quality, variety, and countries represented.”

Still, even Raskin admits that some organic winemakers keep their organic bottlings “in the closet” because they fear that consumers perceive commercial wines as a superior product. “It’s really shocking and heartbreaking,” Raskin says of that type of marketing. “These wines stand on their own–they get medals in competitions. It would please me if they were appreciated for being organic.”

The growth of the industry, however, hasn’t been without its bumps. In a shining example of government bureaucracy, standards for organic wines are controlled by many overlapping departments and inconsistent regulations. The Bureau of Alcohol, Tobacco, and Firearms, the Food and Drug Administration, the U.S. Department of Agriculture, the Federal Trade Commission, and all the states in the country have stepped into the organic fray. Organic growers can suffer roadblock after roadblock attempting to label their wine, while consumers are left in the dark as to what “organic” really means.

But help has arrived. After a seven-year debate in Washington that included considerable acrimony over whether chemical additives, sewage sludge, and bioengineering could be allowed in products certified “organic,” the USDA in 2000 released a set of organic standards. These guidelines–requiring that only organically grown grapes may be used in the bottlings–for the first time provide a consistent process for certifying organic products.

The sulfite issue was a major stumbling bloc in the debate. Conventional winemakers have added sulfites to wine for centuries to prolong shelf life by preventing oxidation and bacterial spoilage. Most wines have sulfite concentrations between 50 and 350 parts per million. Paul Chartrand of Chartrand Imports–a retailer of French, Italian, and some domestic organic wines–says that while most organic wineries use sulfites, there are many who believe the term “organic” should be synonymous with “nothing added.” Under federal regulations, a wine that contains less than 10 parts per million of sulfites is not required to carry a sulfite warning on the label.

Sulfites are also an issue for the estimated 5 percent of the population who are allergic to them–headaches, hives, cramps, or flushing of the skin after drinking wine is a tell-tale sign of an allergy. Unfortunately, a sulfite-free wine does not exist, since sulfites are a natural byproduct of fermentation and are present in wines without having been added. However, organic wineries strive to limit the concentration of sulfites to 40 parts per million or less, making them safer alternatives for people with allergies.

“Making wine without added sulfites is one of the hardest things you can do,” says Tony Marti, owner of the Sebastopol Fine Wine Co. Marti has high praise for companies like the Mendocino-based Frey Vineyard of Redwood Valley, the grandfather of organic wines. “I find many of their organic wines to be bold and innovative,” Marti says. “I have no problem recommending them at all.”

But How Does It Taste?

The organic wine industry has for some time now been cursed with the stigma of producing lower-quality wines, partly owing to short shelf life. But as organic techniques improve and buyers become more accepting, it’s slowly shedding the stereotype. “The wine industry is like fashion because it’s subjective and conscious of trends,” Chartrand says. “There’s still an image problem, but it’s getting better.”

One way to overcome the stigma is to produce a better-tasting wine, and many organic vintners say they’re doing just that. “The quality of wine is getting better every day, and we want to demonstrate that organic wines can compete on a world level,” says Fetzer winemaker Robert Blue. Most growers say organic grapes offer pure flavor, superior aromas, and better fruit intensity than their chemically altered counterparts.

Not only are organic wines competitive on the palette, they’re also competitive in the wallet. Their price ranges from $7 to $30, depending on quality and vintage.

“I think it’s the wave of the future,” says Tony Marti. “People are turned off by the science-knows-everything attitude, since it’s resulted in degradation of the environment and pollution of our bodies. To be honest, I wish there were even more organic wines on the market.”