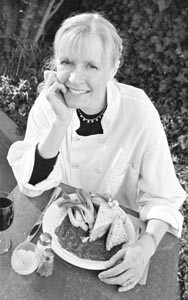 ‘Organic’ is the word in restaurant dining

THERE’S NO DOUBT that the phenomenon is taking root; restaurant chefs are becoming more committed to buying organic. According to a 1997 survey by Food and Wine magazine, 76 percent of chefs questioned say they “actively seek out organically grown ingredients.”

The reasoning behind this trend depends on the individual. Some cooks are doing it purely for the enhanced flavor. Ecologically-minded chefs are doing it because it correlates with their own philosophy.

Sometimes it’s for personal choice–a chef who routinely chows down on organic salads and naturally produced meats and eggs at home may question serving anything less to his or her diners. Yet the depth of commitment varies. Some chefs do it for the image factor, touting themselves as serving organic to get recognition and then offering just a couple of token organically produced items on the menu.

On the flip side, research by Patricia Dines, author of The Organic Guide to Sonoma, Napa and Mendocino Counties (see Morsels), indicates that some North Bay restaurants using a high quota of organic fare haven’t even been marketing that potentially customer-building fact. “I’m trying to get the message out that consumers are very interested in organic,” says Dines. “But I’ve had to really network to find the places.”

Some local restaurants are even growing their own organic produce. However, the restaurant business is already so labor intensive that not many eateries pursue creation of a kitchen garden, although several local restaurants do grow some specialty items, such as herbs or heirloom tomatoes, on the premises.

Although it’s tough to thrive (Acre restaurant in Healdsburg was attempting to grow some produce and serve organic fare, but recently went belly up), a few restaurants are making it work. At a cost.

“It’s a lot of hard work,” admits Bernadette Burrell, chef-owner of Dempsey’s Restaurant and Brewery in Petaluma, who gets up at 5:30 a.m. to tend the garden and often doesn’t return home from the restaurant until 10:30 p.m. “I decide what I want to grow for the year, buy the seeds, store them, plant them, and go from there.”

While some local restaurants showcase a small specialty garden on the property–mainly to impress diners–Burrell actually grows much of the organic fare served in her popular riverfront restaurant.

The one-acre kitchen garden, dubbed Rooster Ranch, is located at her west Petaluma home. It produces a myriad of pesticide-free goodies, including eight varieties of lettuce, plus tomatoes, zucchini, shell beans, melons, cherry bomb peppers, chilies, figs, berries, apples, flowers, and herbs. The eggs from chickens and ducks on the property are used to make pastries.

Besides the superior flavor aspect, Burrell says, the other advantage to growing her own organic ingredients are that it keeps the restaurant’s menu items within a lower price range, with dishes running between $3.50 and $15. “If I had to buy organically, that would be really difficult,” she explains. “If I had to buy organic arugula at $7 a pound, I’d have to charge $10 for a salad!”

Other restaurant owners are shelling out more for organic goods for philosophical reasons, but at less financial return.

“It costs more and it is a challenge,” says Alex Bury, chef/owner of Sparks restaurant in Guerneville, which serves almost 100 percent organic, vegetarian fare.

“But if we end up making less profit because what we offer is organic, it’s OK with us.”

However, Bury, who buys most of her produce from small local farms such as Sonoma Organics, says she is encouraged that customers are becoming more ecologically savvy.

“I’m seeing organic in more mainstream restaurants and in nonvegetarian restaurants,” she says. “People care, and the word organic is meaning more because people are asking more.”

DINES SAYS she sees the organic restaurant idea being most successful as a partnership between local small-scale farmers and restaurants. However, that too has its drawbacks. The problem, she explains, is that many restaurants follow the super-convenient industrial model whereby chefs receive just one delivery of all products from a single source.

“If you’re getting deliveries from a bunch of people, you have to manage a lot more people, a lot more accounts–it’s a lot more labor intensive,” she explains, adding that she is excited by the prospect of more local organic farm-restaurant connections–and specifically by the idea of a farmer bringing food directly to the restaurant kitchen.

“Imagine,” she muses. “How insanely fresh is that?”