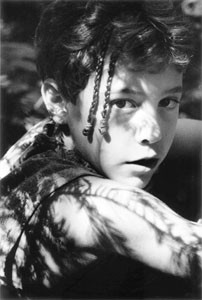 “IT’S A NERVOUS time for many people,” Kathleen McCallum says. “Especially artists. But I feel art is essential. It was my first success, it’s my cause of choice, and it’s my life.” Even as the declining economy and the sagging stock market send a chilly blast through the soul of the nation’s artistic community, McCallum is once again bringing together dozens of North Bay photographers for a weekend art festival in Montgomery Village Shopping Center in Santa Rosa.

Can local artists survive the death of dot.com-fueled conspicuous consumption? McCallum’s 3-year-old festival, called Camera Art 3, aims to help them try. The goal is simple: to help local shutterbugs catch the fickle eye of the public and break through to new levels in their careers.

McCallum, 43, who is the event’s founder, organizer, and chief cheerleader, thinks her effort is paying off.

“I think we’re definitely making a difference,” she says. “The festival is taking talented people and helping to launch their careers.”

As evidence, McCallum points to the success achieved by several Camera Art participants, including Santa Rosa Junior College student Brian Gaberman, who was picked up by Petaluma’s Barry Singer Gallery, which landed him shows in New York City and Los Angeles.

Of course, McCallum has also weathered a major disappointment since the last festival: the closing of the Silver Stone Gallery, a collective art gallery she helped put together in Montgomery Village to build on the success of Camera Art 1. The gallery closed in Febuary, one year after opening, because the landlord moved McCallum and her collaborators to a month-to-month lease.

“You can’t really plan shows if you might lose your lease at any minute,” McCallum says. “But we had a great run.”

Diversity has always been the main focus of Camera Art shows. In the previous two years, between 3,000 and 4,000 people trouped through Montgomery Village during the two-day show to see work by artists ranging from Rolling Stone photographer Baron Wolman to Polaroid-transfer artist Kathleen T. Carr to McCallum herself to little-known nature photographers.

On exhibit is everything from traditional figurative works to stuff some purists would be loath to even admit is really photography: liquid-emulsion works, hand-colored images, and photography combined with computer art.

But this year, the bar is set a bit higher. McCallum organized a juried portion of the festival: Katie Burke of Pomegranate Communications selected works, awarding more than $1,000 in prizes to four winners, including Santa Rosa photographer Diane Miller, who took first prize. In all, fewer photographers will exhibit: 30 instead of last year’s 50.

“Artists will have more room,” McCallum says. “They’ll have a better chance to make some money.”

THIS YEAR’S festival is also making an almost evangelical effort to convince ordinary folks who attend the festival that art is a good investment, both financially and socially. As part of that effort, Barry Singer of the Barry Singer Gallery will give a talk about collecting fine art photography.

“Artists enrich our lives,” McCallum says. “What I’m trying to communicate is that the community needs to support artists too.”

But if that sounds a bit too much like charity for your tastes, McCallum offers another incentive: the possibility of big bucks. She studied with the late Ansel Adams back in the ’80s, and she looks back with chagrin on her decision to pass on the opportunity to purchase prints for a couple of hundred dollars, prints that would now be worth $40,000.

The only trick, then, is distinguishing the next Ansel Adams from the artist whose work soon won’t be worth the price of the paper it’s printed on. But McCallum urges a less mercenary attitude.

“I think you need to be in it for the long haul,” she says. “You need to follow artists through their transformations and growth.”

McCallum says she already sees photographers reacting to the softening art market by adopting such cost-cutting measures as producing smaller prints. But regardless of how big a bite the high-tech crash takes out of the art world, McCallum can’t imagine most artists she knows walking away from their work.

“It’s in your soul.” McCallum says. “Stopping is not an option. I’ve worked three jobs at a time before.