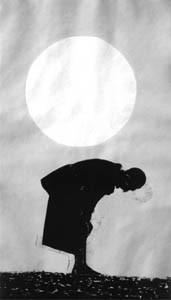 NURSED BY the Jazz Age and moved by the beat, outgoing Sonoma State University art professor Shane Weare was among those Englishmen of a certain age who were impassioned by the myth that was America.

While Weare attended London’s Royal College of Art as a printmaking student, Jets fought the Sharks, teenagers were fresh-branded cultural icons, and American vistas stretched in the imagination for limitless arid miles, unclouded by village parish steeples, endless cups of tea, or cold July rains. Free, raw, new–America appeared a story whose plot anyone could write for himself.

And so, like many of his countrymen, Weare came to the United States and made it his own.

Traveling to the States in 1962 with a group of students, Weare drew his America state by state, producing terse inward prints that were so deeply personal as to be an intimate diary of the nation. He briefly returned home, but found himself the next year as a postgraduate student at the University of Iowa.

The rest, of course, is history. In the ensuing 38 years Weare married American artist Sally Weare and became a U.S. citizen and a professor at SSU. He retired from teaching last spring, and the University Art Gallery honors him with “Then and Now,” an exhibit opening Sept. 6.

“It’s not a retrospective,” Weare explains, standing in the hangar-like living room of the Bennett Valley home he and his wife share. “That would have been too confusing. The work that I did in the late ’60s and early ’70s is really relevant to what I’m doing now, and I wanted to show something cohesive.”

A love for the old-fashioned marvel of drawing led him to study printmaking, since, as he says, “unfortunately, drawing is not taken seriously.” The Library of Congress took Weare’s printmaking seriously enough to purchase his early study of Nevada for its archives, an artifact of one artist’s experience of the West.

When he and Sally began their family–their son and daughter are now grown–the cheery demands of domestic life drove him inward, resulting in fantastical mindscapes of surreal worlds that he nonetheless says “are about America.” Inner seeking led to an appreciation of the natural beauty of the Bay Area. Large prints of the Bolinas shore caused former San Francisco Chronicle reviewer Thomas Albright to proclaim him “a brilliant etcher and one of the Bay Region’s most inventive imagists.”

But Weare doesn’t do landscapes anymore. “I think that it’s extraordinarily difficult to talk about this world,” he says. “Nature upstages everything, thank goodness, and I’m not really interested in saying much about it. The human condition is what I’m interested in.”

And so his work has changed, moving from a reflection of an exotic newness to subliminal portraits of the natural world and out to mankind as a whole. “Then and Now” centers on Weare’s relentless fascination with man’s relationship to his world, replete with his own handmade mythos. Birdlike women, carnivorous fish, and black-inked figures often inhabit his pages; mortality looms.

“They’re more about being in life in this world,” Weare says. “I don’t believe in God, yet I believe in the wonder of the universe and how amazing people are. This is about fear, religion, good, and evil.” This, in fact, is about life itself.

From the August 30-September 5, 2001 issue of the Northern California Bohemian.