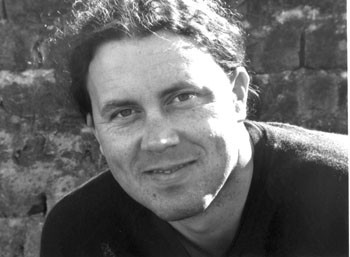 IT’S ALWAYS a good sign when you see a book prominently displayed in the window of an independent bookstore, ready to set sail into the inner world of the reader whose eye it catches. That was how I happened on Edgewater Angels by Sonoma writer Sandro Meallet.

The novel is about a young boy, Sunny Toomer, growing up in the projects of San Pedro, Calif. What makes Edgewater Angels a wonderful read is that, like all good literature, the book transcends its subject.

The novel is made up of a series of tightly woven vignettes that, like the people in the neighborhood Meallet writes about, cannot exist without one another.

I knew that it was going to be a different kind of novel about the inner city when Sunny mediates what could have otherwise been a violent personal dispute between two teenagers by suggesting a swimming contest. In a neighborhood in which violence is so commonplace that Sunny and his friends have learned to duck and cover to avoid the gunfire, Meallet has created an intricate world where, along with flying bullets, there is an abundance of humor, beauty, and even a few ghosts.

I knew that it was going to be a funny book when Meallet described one of the swimming contestants as having a “toiletbowlsized bellybutton.” I also realized with pleasure that Meallet has a fresh eye for language when he describes the neighbors, who have come down to the bay to watch this unusual contest, being overcome with mirth: “The whole crowd started laughing as if underarm tickled by a thousand invisible fingers.”

This style of writing reminded me of my father (Richard Brautigan), William Sayoran, and Maxim Gorky.

Along with a healthy sense of humor, these three authors share with Meallet an ability to write about poverty in a way that doesn’t make the reader feel like a voyeur. Meallet imbues all his characters with a dignity that helps us avoid the pity or the sense of the exotic that can infect a middle-class person reading about different cultures or classes.

Yet Meallet doesn’t gloss over the feeling of shame that the awareness of being poor can impart to a kid. Sunny, pushed to the brink on the first day of school, uncharacteristically hits a girl after she taunts him for wearing tattered clothes and then shouts at him, “I saw you and your mother digging thru trashcans one night!”

Although Sunny gets suspended, he doesn’t stop going on “trashdigs” with his mother. On some level, he knows that what helps keep his mother’s sanity is the idea that she might find something truly valuable on the street. This desperate, never-ending quest for a way out of poverty is also what drives his violent uncles to blow their meager but hard-earned paychecks in Las Vegas and then tear back to the projects in a rage.

But, eventually, it’s no longer enough for his uncles that Sunny merely witnesses their violence on others. Now that he is on the verge of manhood, they want to teach him to inflict wounds. Meallet writes about this turning point in Sunny’s life, using a stunningly effective combination of plain talk, compelling storytelling, and classical mythology. The man Sunny Toomer is chasing with a knife transforms in the dark empty streets into a supernatural creature, much like the angel who comes to earth to wrestle Jacob in the Bible.

The power of Meallet’s writing lies in literal and figurative transformation. He morphs words and stretches the use of the hyphen until you think it will break. He creates visual images that float effortlessly towards the stars. I was dazzled.

Santa Rosa resident Ianthe Brautigan is the author of ‘You Can’t Catch Death: A Daughter’s Memoir.’