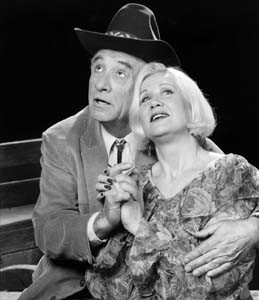 WHEN AN ACTOR bellows, “I do a terrific Stephen Hawking impersonation,” you know a play is taking a left turn. The Bodega Theatre Company’s production of Remain Seated, playwright Lois Meltzer’s farcical romp through the physical rehabilitation wing of a corrupt hospital, is rife with such sudden serves, but it definitely heads in the right direction.

A goulash of mistaken identity, romance, phallic balloon animals, ex-cons, and frank humor about the challenges faced by those using wheelchairs, Remain Seated is perhaps the most unlikely and delightfully bizarre comedy to hit local floorboards this season. If Lenny Bruce penned screwball comedies, the result would bear a close resemblance to this irreverent, door-slamming, trouser-dropping deconstruction of the well-made play.

Nebbishy reformed safe-cracker Artie (Dan Vaneck) and cigar-chomping malcontent Marty (John B. Everett) are out-of-work vaudevillians who finagle a gig as “laugh therapists” in a hospital’s physical rehabilitation wing. There they befriend the recently paralyzed Glenda (Nicole Kamens), who is in the process of settling a lucrative lawsuit with her shyster lawyer Shelley (Mark Martini). The vaudevillians also uncover the fiendish deeds of ne’er-do-well care-providers Dr. Gold (Gordon Stubbe) and nurse Bernice (Luana Presler), who bill Medicare for services performed on the dead.

Despite a handful of flat notes, Remain Seated is a hilarious, albeit surreal, laugh-fest at times as quaint as the theater’s digs (the back of the Casino, a country tavern off Bodega Highway). Director Richard Track keeps the show taut and briskly paced without creating a lot of audience-exhausting clamor. Vaneck and Everett are well matched as the bumbling but lovable duo on the dole.

Throughout, the two reflect that “when it comes to comedy, ‘funny’ isn’t everything,” the half-assed Zen mantra they intone when their various schemes fizzle. With Remain Seated, the platitude has weight. Though the playwright’s gags are often extremely witty, and her shtick and patter precise, it is ultimately the sincerity and earnestness transmitted by the cast that sells this work. Their onstage jollity is contagious, and their willingness to submit fully to the work’s absurdity is truly heartening.

SOMETIMES the lights dim, the curtains part, and your deity gives you a glimpse of what lies at the end of your profligate life. Pacific Alliance Stage Company’s production of The Best Little Whorehouse in Texas, directed by Michael Grice, provides many such moments, and for this reviewer, the view wasn’t of heaven.

Miss Mona (Meg Mackay) has run a whorehouse catering to Texas bumpkins and power brokers for eons. But suddenly, with little more motivation than the need to advance the plot, televangalist Melvin P. Thorpe (Craig Jessup) decides it’s time to put the kibosh on the operation. Hanging in the moral balance is Sheriff Ed Earl Dodd (Bob Parnell), who is torn between his duty as a lawman and his devotion to the charismatic madam.

Innumerable song and dance numbers roll on and off the stage with little more energy than a dead battery (Lawrence Pech’s choreography has all the originality of an aerobics class), and the performances, in general, are tired.

Despite Mackay’s estimable talents (she has a wonderful voice and an engaging stage presence), the production remains terribly slack and listless, and suffers greatly from the overacting of minor cast members constantly “re-acting” at full-bore in the background. Sin has never been so dull.