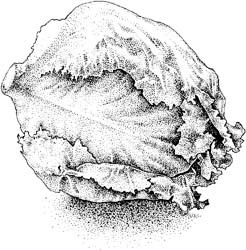 Oh, the joys of iceberg lettuce

THE OTHER NIGHT, it dawned on me that finally, at age 48, I know what I want in life. I want a head of iceberg lettuce. I am a middle-aged man, and I have not seen a head of iceberg lettuce in years. Of course, I lie when I say that. Just days ago, I saw what had to be cratefuls of the stuff, head piled upon head, each one as big and solid as a green-marbleized bowling ball. Laid out and glistening in a lusterless sort of way, they were getting misted by a computer-timed produce mister.

They were there, right next to the cabbage and the turnips and the rutabagas–all the things that are bought by people who still own pressure cookers.

The bok choy and the daikon radishes and the arugula and the curly endive were on the other side of the store, halogen-lit and surrounded by mounds of sugar snap peas that were selling for something like $7.95 a pound. The iceberg was going for 25 cents a head. If you bought two heads, you got a free puppy to take home.

But this much I can say with certainty: I have not seen anybody actually buy a head of iceberg lettuce since sometime in 1977. The last time I was in a public place and a server actually offered me anything served on a leaf of iceberg lettuce, it was 1973. The best I remember, it was a public place where portions of macaroni and cheese were laid out under a sneeze guard; on the wall there was a B-minus rating from the health department.

The best I remember, the server was wearing a paper hat and pushing day-old Jell-O. She was also wearing rubber gloves.

Nevertheless, I do not believe that any head of iceberg lettuce deserves this sort of treatment just because it wants to be served with Thousand Island dressing. I have been through a lot of cafeteria lines in my time, and I have eaten a lot of cottage-cheese-and-ring-of-pineapple combination salads. I have consumed a lot of things that were served with a maraschino cherry on top. But I cannot think the single leaf of iceberg lettuce poking out from underneath ever did me any lasting harm.

I CAME TO full-grown manhood knowing nothing but iceberg lettuce. Although I existed in a world that did not know baby Bibb from Boston, a world in which anything that had a dressing on it could be called a salad course, I still managed to get through puberty, pass my driver’s license examination, and learn to read French.

Instead, I remember feeling the unwavering comfort that can come only from a world that sees no particular reason to offer menu options. It was nice to know that, no matter what diner counter I sat at, there would be only one soup du jour; it would be the same one it had been the day before; it would be tomato, out of a can. It was a relief to know that there would not be a special of the day, no fresh catch, no choice of gourmet pizzas.

There was no such thing as a salad bar. There were only brown plastic salad bowls that wanted to look like slightly under-fired pottery. The salad that was served in them was called “green.” It came with “tomato wedges, radish garnish, and cucumber slices (in season).”

It was, of course, a world in which refrigeration was not everything it was supposed to be. Once in a while, when you cracked open a head of iceberg lettuce, the leaves all had brown edges. Sometimes there was a mushy spot down in the middle, where the whole thing had gone spongy with field rot. Sometimes there was even a wormhole. Sometimes the dream of lettuce wedges, served alongside T-bones and sour-creamed and bacon-bitted baked potatoes, ended up as nothing more than a few salvaged, still-curling leaves that did the best they could to coddle gray, mayonnaisey lumps of tuna fish salad.

Sometimes, however, I would like something that fights back when I bite into it, something that screams for red French dressing in a bottle that reads “Shake thoroughly before pouring,” something that, even though it is lettuce, seems to scream “Hamburger, fries, and, yes, I’ll have extra cheese on that.”

The other night, while I was watching my friend Nadine arrange mandarin orange slices on a plate of three-quarter-inch-wide spinach leaves, I said, “Do you think you could do that kind of thing with a head of iceberg?”

Nadine put down her mandarin-orange tongs and said, “Why in hell would anybody want to do that?”

I said, “I don’t know. Just, sometimes, I get to thinking about iceberg.”

Nadine said, “That is thoroughly disgusting. It reminds me of my mother.”

Nadine said, “It has absolutely no nutritional value. I’m not even sure it’s fiber.”

I said, “For fiber, I can take Metamucil.”

I said, “It’s just that, sometimes, I still want something that kinda goes crunch in my mouth.”

Nadine said, “Take these plates into the dining room. Put them on top of the chargers. Do not switch anybody’s place card.”

AT THE TABLE, where all the women, like Nadine, were wearing sweater sets, there was candlelight and Harry Connick Jr. was playing on the stereo. There was a brisk Pinot Grigio to go with the salad; crisp homemade rusks of poppy-seed wheat bread were served on the side.

I ate my tiny spinach leaves and tried to look happy, but I was not. I knew that, at any minute, I could discover that, because my tiny spinach leaves were so fresh from the green-grocer, I was swallowing grit. I might discover that I was allergic to something in the dressing. At that very dinner table, on that selfsame candlelit evening, my entire life might very well be changed.

If I had had a head of iceberg lettuce, I wouldn’t have been taking those risks.