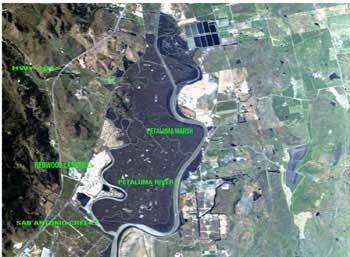 Toxic Soup: Aerial maps show the proximity of the landfill to delicate riverine and wetland environments.

Anyone with a normal sense of smell who has driven down Highway 101 south of Petaluma has caught a whiff off the Redwood Landfill, the continually growing mounds of refuse east of the freeway and adjacent to the Petaluma Marsh, the largest remaining unaltered tract of tidal wetlands left in California. Now environmentalists are raising a stink over a proposal to expand the landfill by 50 percent, because they say it threatens both the marsh and public safety.

The Redwood Landfill, located just north of Gnoss Field near Novato, is the dump of choice for most of Marin County, Petaluma and many parts of Sonoma County, as well as some of San Francisco, Berkeley and Richmond. The reliance on the Redwood Landfill is steadily growing as these urban areas increase in population and, consequently, trash production.

To stave off the lengthy, unwelcome process of scouting for new sites, Waste Management Inc.—the national parent corporation of the landfill—recently applied to Marin County for a permit that would allow it to expand by 50 percent, a number that has local environmentalists up in arms.

If approved, the landfill would expand right to the marsh’s edge and threaten tidal wetlands, according to environmentalists. Wetlands naturally filter out many waterborne pollutants and are ranked second in fecund biological life only to a rainforest.

The Redwood Landfill was built in 1958 without a liner to separate toxic leachate from groundwater. In their draft environmental impact report for the proposed expansion, Waste Management stated that retrofitting a liner would be prohibitively expensive, assuring that the “bay mud acts as an impervious barrier.”

Environmentalists disagree. While mud, when correctly treated, can indeed form a barrier, according to the report, the landfill has not assured its imperviousness to the satisfaction either of David Yearsley, the Petaluma River Keeper— the volunteer steward and watchdog for the river—or the No Wetlands Landfill Expansion, a citizen group protesting the expansion. They fear that the proposed expansion could significantly impact local water quality and public safety if given the green light.

Aerial photos of the landfill, which is framed on three sides by the delicate ecology of the Petaluma Marsh, show how, in order to expand, the landfill must be built up higher and steeper, leaning ever more precariously toward the river.

“An earthquake, serious flood or failure of the landfill’s control systems would likely create an environmental disaster,” says Yearsley. “Toxic soup would spill right into the waters of San Antonio Creek and flood the Petaluma Marsh. Due to the tidal action, in and out twice a day, any pollution from there has the potential to go as far upstream as Petaluma and downstream to San Pablo Bay.”

Ramin Khany, district manager for Waste Management in California, argues that the environmental concerns are overblown.

“Landfills operate under a fill sequence plan, an engineered document that allows how much you can take in on a daily basis, how steep your slopes can be, etc.,” Khany explains. “They calculate these for the worst case scenarios, including earthquakes and other disasters. If that agency feels that we are not designing it properly, then they would not allow us to build it.”

Khany expects the California Integrated Waste Management Board and the Regional Water Quality Control Board to make a decision about the permit based on the environmental impact report’s feedback within the month. From there, he anticipates another six to eight months before a final decision is reached about the expansion.

Even without expansion, the practices of the landfill are a constant disruption to the abundant wildlife of the Petaluma Marsh, according to Yearsley.

“Seagulls used to flock to the dump, and rafts of ducks rested on the adjacent sloughs,” he says. “Now the use of bird-abatement cannons and whistles has driven them off. Even more problematic, they also drive native and migratory birds out of the wetlands. I’ve seen a dramatic decline of birds in the marsh since those practices started over 10 years ago.”

In order to keep production high, landfill employees also use bright halogen lights for work at night. Under the expansion proposal they would be allowed to work even later, increasing the disturbance and glare. As it is, the lights are often left on all night for security or other purposes, and the negative effects of light on wildlife have been well documented by groups such as the California Department of Fish and Game and Ducks Unlimited.

“I’ve been out in the middle of the marsh near dark and can hear their cannons perfectly well, and have been blinded by their lights while navigating the sloughs,” Yearsley says. Instead of expanding the existing landfill, he thinks Waste Management should explore other available options.

“There are more modern technologies the landfill could employ in the meantime that are less abusive, like digestive technologies, enzymes and chemistry that help the waste dissolve quicker,” he says.

“They could also be using the methane gas the landfill produces to generate energy, like the Sonoma Landfill,” he suggests.

Khany pointed out that the landfill recycles over 40 percent of the material it takes in.

With less and less land available for dump sites in the North Bay, the issue looms: what does a civilized society do with its trash? It has to go somewhere. Eventually, the Redwood Landfill will fill up, of this there is no doubt. How long it might take is a matter of whom you ask. It might in 20 years, according to environmental experts; or 40 years, according to Waste Management’s projections. Yet currently, the Redwood Landfill has no plans to scout for other sites.

“There are other sites around the county if they’d just do the work of looking,” says Yearsley. “It’s not a popular topic. No politician wants to be the one to increase fees or try to put a dump in someone else’s backyard. Nevertheless, someday the dump will have to close and it’s better to start looking for an alternative now rather than expanding in a bad location.”

Regardless of the outcome of the permit process for Redwood Landfill, an obvious temporary remedy that No Wetlands Landfill Expansion is promoting is for cities to create programs that encourage households to diminish the amount of waste they produce.

“Public education and incentive will clearly play an important part of this effort,” Yearsley says.