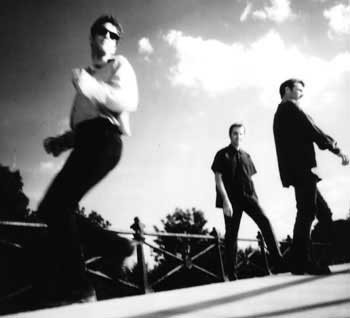 When Mark Sandman, the founding father of “low rock” and frontman for the jazz-lounge band Morphine, collapsed of an apparent heart attack onstage at a 1999 Rome music festival, his untimely death closed the book on one of the best cult bands of the 1990s.

Throughout the last decade, Morphine routinely topped college-radio play lists with a gritty, bluesy blend of jazz-rock driven by Sandman’s loping, homemade, detuned, two-string electric bass and such opiated vocals and bohemian hipster lyrics as could have been inked by Jack Kerouac. (The band actually did record an ultracool ode to the Beat legend titled “Kerouac,” and the writer’s influence on Sandman is evident.)

The anthology—compiled by surviving Morphine members Billy Conway (drums) and Dana Colley (tenor and baritone sax), who have continued touring and recording as the Morphine Orchestra—proves that Sandman, just 46 at the time of his death, was a prolific songwriter blessed by a wealth of strong material. The songs on the two audio CDs are drawn from Treat Her Right, Sandman’s more soul-inflected ’80s outfit, and Morphine. Yet these 31 tracks comprise not a greatest hits package but a hefty sampling of previously unreleased gems that point to Sandman’s remarkable depth as a songwriter. An additional DVD features rare and unseen footage, as well as artifacts from Sandman’s career and additional music.

“This set just scratches the surface,” writes album annotator Ted Drozdowski in the accompanying booklet, “not only of the vast body of Mark’s previously unveiled work, but of a life richly lived on its own terms and done too soon. And always, always, always to be remembered warmly and well.”

This illuminating material is the perfect introduction for the uninitiated and something of a revelation for fans of one of the most private figures in the indie- and alt-rock scenes, who never revealed details of his past to the press. Kurt Cobain should have taken a few lessons from this guy.

What is known is that Sandman grew up in Newton, Mass., not far, in fact, from Kerouac’s home turf. After graduating from college in Boston, he lived the life of a dharma bum, rambling around the Pacific Northwest and even working for a spell on a fishing boat in Washington. Returning to Boston in the mid-’80s, he joined the seminal swamp-blues band Treat Her Right, recording three albums and gaining a modicum of success among local college audiences. He also started several side projects, performing with guitarist Chris Ballew (later of the Presidents of the United States) in Supergroup, collaborating with Blood Oranges mandolinist Jimmy Ryan in a band called Treat Her Orange, and working with the horn-heavy funk band Hyposonics.

In 1992, Sandman and Morphine released the album Good on the small Accurate/Distortion label. The album was reissued the following year by Rykodisc, who released two more Morphine studio albums. In 1997, Dreamworks signed the band for a disappointing major label debut, Like Swimming, and its more accomplished 2000 follow-up, the posthumous album The Night. A stellar collection of rarities, B-Sides and Otherwise, and the live Bootleg Detroit have also hit the market since Sandman’s death.

But Sandbox, the first new material from Sandman in five years, is filled with songs that celebrate life (“They can bend me but they can never break me,” he sings in the life-affirming “They Bent Me”). That is particularly so with the Treat Her Right material, which often evokes that quiet resignation experienced when hanging out at 6am in a bar stinking of stale beer and unrequited lust. Treat Her Right’s blues-inflected alt-rock was propelled by harmonica player Jim Fitting. The band’s songs often sported tongue-in-cheek references to growing up and struggling to retain your dignity, and even ventured into Tex-Mex-inspired ballads. There is also the truly great girlfriend tribute, “Doreen,” a catchy number that enshrines a waitress from Burlington, Vt.

Indeed, Treat Her Right is the real find here, since few Morphine fans had a chance to listen to these great recordings at the time of their original release. What comes across on track after track is Sandman’s unique musical vision—marvel at his odd but relevant song “Middle East,” a recounting of a terrorist hijacking, all laced with one of the most malevolent surf guitar solos in memory.

Consider this your wake-up call.