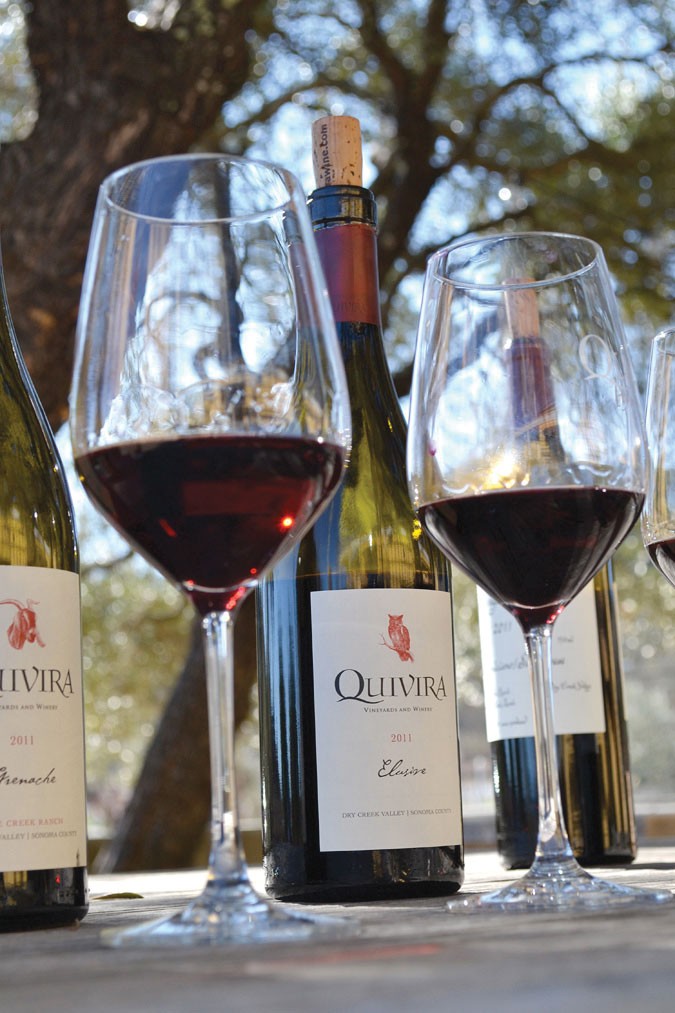 After 10 years of publishing this wine column, we’ve learned at least one thing: we may never run out of wineries.

New brands have cropped up, while dozens of standbys have been transformed by new owners. There are some good wineries we’ve thoughtlessly driven past time and again. Allowing for hot topics like pairing turkey with wine, and the breaking news that rosé is perfect for springtime, there are still maybe 300 to 400 bodegas, brands and bottle shops yet to be discovered in Sonoma, Napa and Marin counties. And yet we’re coming back to this one little Dry Creek Valley winery for the fourth darned time.

Writer Heather Irwin memorably launched this column with a visit to Quivira in February 2004, with the words: “It’s hard to get all snobby about tasting wine when you’ve got oyster juice dripping down your chin.” Returning two years later in a philosophical mood, she found that a sip of wine reflected time, place and the good intentions of the owners. In 2008, I reported that new owner Pete Kight had picked up the cow horn where the Wendts left off, continuing biodynamic farming practices while building a new garden and chicken coop.

In the cellar, new winemaker Steven Canter, succeeding Gray Wann, who had continued a stylistic tradition initiated by Doug Nalle in the 1980s, introduced Acacia barrels to age Quivira’s signature Sauvignon Blanc without imparting strong oak aromas. Today, winemaker Hugh Chappelle says that looking a few years out in a crystal ball is part of the job. “The verdict’s still out on Picpoul,” he says of the winery’s continuing experimentation with Rhône varietals.

Zinfandel remains Quivira’s mainstay out in the market, and Zin has made a comeback in the past decade among the scorning critics, says Chappelle. Now they’re asking how they could possibly have forgotten about this grape. Vineyard manager Ned Horton helps to determine when the grapes have the combination of lower potential alcohol and bright flavors they’re looking for; some blocks are picked up to a dozen different times. Still, the 2011 “Elusive” Dry Creek Valley ($34) is an outlier, a subtly fruity, savory Rhône-style blend from a cool vintage.

Weather comes and goes, the blend of people, too. Quivira changes from year to year, becoming more itself all the time—maybe because it’s been run by people who prioritize the winery’s place in its environment over, say, big point scores, and allow it to stand on its own name. Anyway, it’s hard to get all snobby about wine when there are chickens scratching and clucking nearby.