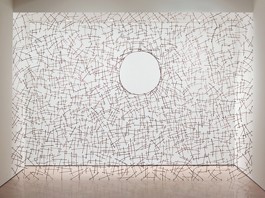 Take a green leaf, spit on it, add a yellow leaf. Take a rock, cover it in flower petals. Regardless—photograph it. What Scottish artist Andy Goldsworthy does sounds simple, yet it’s anything but simplistic. Just ask Hess Collection museum director Robert Ceballos, whose gallery, situated above the Hess Winery’s tasting room and gardens, recently acquired Surface Tension, a new Goldsworthy composed of chestnut leaf stalks solely held together with hawthorn thorns. “I went to storage and opened it up and it was a bunch of sticks; I thought that they were cuttings from a grapevine,” he laughs.

Purchased from a Bay Area gallery, Surface Tension joins the Hess’ other works by Goldsworthy—Rock Pools (rocks melted in a kiln turning from sedimentary to igneous); Torn Stones (a video of the rocks melting); and Snowball Drawings (works on paper created when snowballs filled with pigments from California pine seeds and manzanita were allowed to melt)—making this the largest public Goldsworthy collection on the West Coast.

Not every North Bay museum or gallery can show the work of acclaimed international land artists, but that doesn’t mean that the bar isn’t set high this autumn. The Sonoma Valley Museum of Art hosts its “Art Biennial 2009,” running through Nov. 29, an exhibit juried by gallerist Susan Cummins, SSU art professor Michael Schwager and painter Frances McCormack. According to new SVMA executive director Kate Eilertsen, some 300 artists applied for the 48 eventual slots.

Speaking of Schwager, his University Art Gallery hosts “Used” Sept. 10-Oct.18, featuring five California artists working with nontraditional materials and readymades. Think Duchamp and then think beyond. Nov. 5–Dec. 13, the university holds its annual juried student show, flipping it from its usual spot in the spring.

The Marin Museum of Contemporary Art, a somewhat hidden jewel in the newly developed Hamilton area, hosts rock treasure Stanley Mouse in its second “Legends of the Bay Area” exhibit, running Sept. 26–Nov. 1; last year, it saluted painter Frank Lobdell. Mouse’s show is subtitled “The Evolution of Stanley Mouse” and features everything from his famed screaming auto sketches to his rock poster art to his more serious and thoughtful nude studies. Following Mouse is the museum’s annual “Art by the Inch” fundraiser (Nov. 14), in which high-quality paper is stretched around the gallery walls and several artists collaborate to cover it. The public then snips what they want from the finished piece, paying $1 an inch for the work.

Talk about your hidden jewels, the Bolinas Museum exactly fits that description, Bolinas residents being famously persnickety about being famous and regularly stealing their town’s sign marker from Highway 1. The museum’s annual fundraiser (Sept. 19) is again slated for Susie and Mark Buell’s “Peace Barn,” and work is currently on preview at the museum for those interested in bidding. To enliven the auction, the amount of work on offer has been halved from the usual 80 pieces to just 40 this year. Assistant director Elia Haworth promises “a longer party and a shorter auction,” adding that the food will be wonderful.” It’s West Marin; we believe her.

Opening Oct. 3 is “Going Origami: From Art to Math to Science and Beyond” using the wisdom of physicists and other scientists in paper bending. Starting Nov. 20, look for work by surrealist Petaluma photographer Michael Garlington and paintings by Chris Hellman, philanthropist and Hardly Strictly Bluegrass founder Warren Hellman’s wife and a fine painter in her own right.

The Sonoma County Museum continues its annual “Artistry in Wood” exhibit through Sept. 20, opening “Envisioning the World: The First Printed Maps 1472–1700” on Oct. 2 and running through Jan. 17. Drawn from a different section of the huge Wendt family cartographic collection that exhibited at the museum some five years ago, this grouping of 30 ancient maps focuses on post-Renaissance Europe. A new Smithsonian member, the museum is now also the home of Kathryn Hasting’s WordTemple poetry series featuring well-regarded writers reading and in discussion.

The innovative Headlands Center for the Arts explores the idea of Utopia for 2010 by starting a new series of discussions on group dynamics as found in communal living and communal art-making with “Becoming Commons” held in the mess hall on Oct. 24; eating an insanely good dinner is part of it. The fall open house—in which the artists in residence as well as those who rent studio space open their studios to the public—is slated for Oct. 18, and installation artists participate in a “Minimal – Maximal” discussion on Nov. 15.

The Arts Council of Sonoma County’s exhibit room, ArtSpace404, shows work from each of the 141 participating ARTrails artists Sept. 25–Oct. 23, allowing the public to get a taste of the work on offer when these artists throughout Sonoma County throw open their doors to the public Oct. 10–11 and 17–18. Last year’s ARTrails generated some $375,000 in sales and almost 4,000 visitors.

The Arts Council Napa Valley Open Studios run Sept. 19–20 and 26–27, featuring 88 artists in 59 studios. For the second year, this is a juried exhibit. Filmmaker Eleanor Coppola and former ambassador Kathryn Hall are co-chairs. Napa comes into its own!

The Napa Valley Museum continues its “Portals to the Past” history exhibit through Oct. 4. On Oct. 9, the space shifts focus dramatically, opening “Corpus Perspicuous: Body Transparent,” work by Bay Area artists Cheryl Calleri, Tobin Keller and Thekla Hammond that examines the human form in a manner of media running through Nov. 18.

The di Rosa Preserve prepares for its annual yowza auction, previewing work from 50 different artists, most of them collected by founder Rene di Rosa, Oct. 2–15, with the auction slated for Oct. 17, and featuring donations from Deborah Oropallo, William T. Wiley, Richard Shaw, Enrique Chagoya and a full slate of Big Art Names. Oct. 31–Jan. 23, the Preserve digs into its vaults with the help of curator Chandra Cerrito to present “Altered States,” work related to the mystical, the transcendent and the transformative—not a bad way at all to approach the autumn.