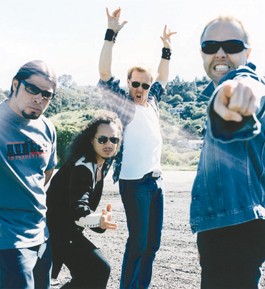 If you’re looking to buy a scalped Metallica ticket for their show at the Marin Center (Sept. 11), be warned: Ticketmaster isn’t sending out hard tickets until just a few days prior to the show. As with any scalped ticket, don’t fork over any cash until you have a hard ticket in hand, and avoid those hawking printed-out “e-tickets” at all costs. The band’s first show in Marin—at a small 1,800-seat venue, no less—is a scammer’s dream. Be patient, play it smart and you might just get in.

The historic Phoenix Theater has begun assembling a database of photos and flyers from the last 20 years in preparation for a book about the history of the venue. The Phoenix also brings back ska-punk favorites Reel Big Fish (Sept. 12), SoCal reggae-punk favorites Pepper (Sept. 27), Canadian jazz-punk veterans Nomeansno (Oct. 11), and bluegrass-punk trio the Devil Makes Three (Oct. 18). And since the Santa Rosa Police Department preemptively shut down last month’s E-40 show at the Armory as concert organizers were setting up, citing permit issues, hip-hop finds a home in Petaluma again with rapper Devin the Dude and laid-back dancehall singer Collie Buddz (Oct. 1).

A couple blocks away, the Mystic Theatre boasts a strong fall lineup with Joan Osborne (Oct. 19). Ignore the sappy radio hit “One of Us”—her night there in 2002, right after her show-stealing turn in Standing in the Shadows of Motown, blew the roof off. Dave Alvin and the Guilty Women (an all-female backing band with noted local guitarist Nina Gerber) drop in adjacent to their appearance at the Hardly Strictly Bluegrass Festival (Oct. 2), and songwriting master and guitar wizard Richard Thompson, seemingly realizing that his shows always sell out, has booked two nights to satisfy the faithful (Dec. 2&–3). Further fresh headliners at the theater include Jerry Jeff Walker (Sept. 19), Robert Cray (Sept. 21), and Ky-Mani Marley (Oct. 24).

To call Sonny Landreth a slide guitarist is like calling Jackson Pollock a painter; the Louisiana phenomenon, hailed by Eric Clapton as “the most underestimated musician on the planet,” appears at the Last Day Saloon (Oct. 24). Metal thrives at the Santa Rosa club with Meldrum (Sept. 10), Jetboy (Sept. 19) and Tantric (Oct. 3), and diehard fans of Sublime can get stoopid at not one but two separate Sublime tribute bands in one week with the Lou Dog Trio (Sept. 17) and the LBC (Sept. 25).

George Porter Jr., the bassist of the Meters who sits alongside James Jamerson and Bernard Odum as a founding father of funk bass, has joined up with DJ Logic and former Miles Davis keyboardist Jason Miles in Global Noize, a cross-cultural hybrid coming to the Hopmonk Tavern during a heavy weekend (Sept. 19). The hangover will linger from the previous night’s show with Soulive (Sept. 18) but should be cleared for the next night’s show with the Meat Puppets (Sept. 20). Also on deck is kora master Youssoupha Sidbe (Sept. 11) and Kyle Hollingsworth from String Cheese Incident (Oct. 11).

Sonoma State University’s annual back-to-school concert this year features Groundation (Oct. 13), a coming home for the reggae group that was founded in SSU’s jazz program and that has since toured the world. (Groundation’s raspy-voiced singer Harrison Stafford actually taught the first California-accredited course on the History of Reggae Music at the University from 1999&–2001.) At the Casbar in Santa Rosa, which has been booming with top-name reggae headliners lately (the Mighty Diamonds, Mad Professor), Jamaican reggae sensation Tanya Stephens serenades what’s sure to be a packed house (Sept. 4).

More known for performing in forests, sheds and Sebastopol, the barrel-voiced Iowa songwriting genius Greg Brown stops in wine country at the Napa Valley Opera House (Nov. 14), just one month after Gordon Lightfoot (Oct. 17). Quasi-international NPR darlings Pink Martini play the Opera House’s “Shaken, Not Stirred” fundraising gala (Oct. 3); full gala tickets including dinner start at $350, although select performance-only tickets will go on sale for $65 on Sept. 3. Just north, at the Lincoln Theater in Yountville, the town known for the French Laundry gets its fill of gumbo and crawfish pie with Buckwheat Zydeco (Sept. 12) and white bread and apple pie with Jay and the Americans (Sept. 18).