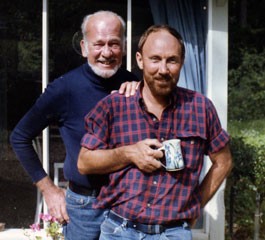 Few people took notice last August when Clay Greene and Jannette Biggerstaff filed a claim against the county of Sonoma and a handful of Sonoma County business, alleging elder abuse, sexual discrimination and what amounts to theft of personal property. But the whole country has turned its attention to Sonoma County since their case was taken up by the National Center for Lesbian Rights (NCLR). News of the alleged abuses went viral in April with Sonoma County popping up in national headlines. Would-be visitors threatened to boycott, as though the liberal county were Arizona, and promised to pour local wines down the drain rather than taste the bitter fruit of Sonoma County’s oppressive soil.

Specifically, the complaint alleges that county officials refused to recognize the 25-year relationship that Clay Greene and his late lover Harold Scull shared, that the couple were separated by force during the three months leading up to Scull’s 2008 death; that their belongings were auctioned off without consent; and that Scull—who at age 89 may have suffered from dementia—died alone while his longtime partner was imprisoned in a nursing home. The details in the complaint are, indeed, horrifying for the individual abuses alleged as well as the implied institutional homophobia.

But there is a problem: a complaint is simply not fact. It has not been litigated and, frankly, anyone with enough cash and brain power to file one at the local courthouse can claim anything in a complaint. Not surprisingly, lawyers for the defendants, including Santa Rosa attorney Gregory Spaulding, say there are factual errors in the complaint. In fact, many of the details of the case are being hotly contested.

If accounts in the complaint were not scary enough, all of the alleged abuses apparently took place against the expressed wishes of the couple, who had taken legal steps to ensure themselves the same end-of-life rights that married heterosexual couples receive, such as hospital visits and medical decision-making. The men also named each other beneficiaries in their respective wills, which is all a same-sex couple could really do to protect themselves before the advent of domestic partnerships, and more recently, same-sex marriage. It’s worth noting that Scull’s will is being carried out according to his wishes.

The NCLR is pushing this case as a prime example of separate systems not being equal, asserting that Scull’s last three months of life would have been different if he were in a hetero relationship. “[The county] treated them as if their relationship had no significance,” charges NCLR attorney Shannon Minter. “They treated them like roommates. Part of this is about discrimination, but part of this also has to do with the vulnerabilities particular to this community.”

Lawyers for the NCLR are staying close to a narrative that says Greene and Scull were railroaded by a careless system and a malicious group of county employees. For its part, the defense is refusing to confirm or deny details that have already been in the press. Spaulding, for example, is unyielding in his claim that Scull was able to make decisions about his own health, but would not go on the record about whether or not Scull was suffering from dementia, citing a reluctance to violate Scull’s right to medical privacy.

Currently, the case is in the discovery phase, where both sides collect the information that will be presented in court this summer, but until the case goes before a jury, most of that information is not being released to the public. The court date is set for July 16, just a month to the day after closing arguments are expected in the June 16 federal trial over Proposition 8, the ban on same-sex marriage that California voters passed in 2008.

The NCLR is a not a new group; the organization’s name may seem dated, but the group’s mission is current. Lesbian, gay, bisexual, transgender and queer people—the LGBTQ community—are seen as having a common interest promoting gender equality, and so the gay rights movement, the lesbian rights movement, have morphed into a single movement to promote LGBTQ rights. One emerging concern of the community is how to care for LGBTQ elders, a group that NCLR lawyer Minter says has particular vulnerabilities.

“[LGBTQ] elders are more likely to be estranged from their families and other people in the community where they live,” Minter says. “They’re less likely to have children.”

They are also more likely to be in poverty as they age, which exacerbates isolation, and unlike married couples, LGBTQ elders are not eligible for the social security survivor benefits or pensions that their partners may have had. They are also less likely to be in touch with groups like NCLR.

Because of their isolation, many LGBTQ elders don’t know about domestic partnership or what Prop. 8 is. Harold Scull and Clay Greene came of age before the Stonewall riots, before there were support groups and before the phrase “hate crime” existed. When Scull and Greene were young men, homosexuals were being gassed along with Jews and the Roma.

Indeed, the big question to be answered in Greene v. Sonoma County is whether Greene and Scull were discriminated against or whether social factors related to the men’s sexual orientation aggravated a bad situation. The problem is that this case is murky.

Both sides agree that Harold Scull was admitted to the hospital in May 2008 after he suffered an injury at the western Sonoma County home he shared with Clay Greene. The defense’s version of the event is that then-76-year-old Greene struck Scull and caused him to fall; the complaint asserts that Scull just fell—an accident. It’s one of the central facts in the case that really does determine whether the county acted appropriately toward the elderly men.

The other key piece of the puzzle is the question of Scull’s dementia. The county claims Scull was mentally competent when he gave control of his finances to the county and made allegations of domestic abuse, but Greene and Biggerstaff think otherwise. In a case that has already been speculated to death, both among people eager to defend same sex couples and those eager to discredit them, there is much that still doesn’t add up.

Another important distinction between the defense and plaintiff’s version of events is whether the couple were kept physically apart, unable to even speak to one another. The defense claims that a meeting took place between Scull and Greene in June 2008, two months before Scull’s death. The county’s lawyer, Gregory Spaulding, filed a motion in April this year, claiming that the men met and took the things they wanted before the rest of their property was auctioned.

“Both gentlemen were there,” Spaulding says of the meeting, “and given an opportunity to collect their things.”

Spaulding says he doesn’t know how long the meeting lasted, but avers that both men took things from the house before the auction.

Whether the county grossly mishandled Greene and Scull’s situation will be determined in court, but perhaps the bigger issue has to do with the social commitment we have to our elders of all sexual orientation. Minter suggests that perhaps a combination of mismanagement by the county, as well as lack of social support for the men, is what led to this situation.

“We want justice for Harold and Clay,” Minter says. “It’s shameful that any elderly person in our society should be treated this way.”