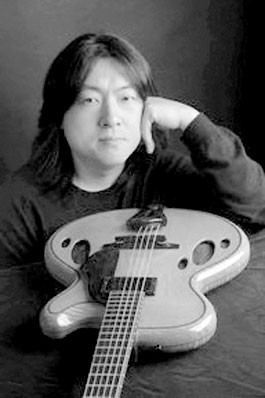 Taku Sakashta spent his last night, like many before it, working late and alone, crafting one of the singular instruments for which he was renowned. Out of his small workshop in a west Rohnert Park industrial park, Sakashta created mandolins and guitars that were widely admired within the close-knit world of world-class luthiers and prized by the musicians who own them.

Hence, the news spread swiftly among them after Sakashta, aged 43, was found stabbed to death outside that workshop on Feb. 11, apparently the random victim of a robbery attempt. The subsequent outpouring of appreciation, dismay and affection rippled across guitar-related blogs and websites. Sakashta’s stunned Sonoma County friends and colleagues have channeled a portion of their grief into organizing a remarkable benefit concert.

“An Intimate Evening for Taku” will be held at Spreckels on May 23, featuring several of his high-profile customers, including Boz Scaggs, Tuck Andress and Robben Ford. A light show and silent auction are also part of the event. Proceeds will benefit the late luthier’s wife, who was also his business partner; they have no children. Donations may also be made to a memorial account in Sakashta’s name at the Elmwood branch of Wells Fargo bank in Berkeley.

“He was a true artist,” says Ford. “Everything he did has a kind of spiritual depth to it. There was so much heart and soul in the guy’s work—and I would say, his life—that just came through, especially his attention to detail.”

“He was just extremely tweaky. It had to be perfect,” agrees Chad Mangrum, Sakashta’s close friend and recent co-worker. “Where most people would be happy with something, he would trash it and start over. It had to be 110-percent perfect or it wasn’t up to his standards.”

“Taku was a master Japanese luthier, an amazing artisan and a good friend,” laments Mac Skinner, operations manager at a small speaker company next door to the guitar maker’s studio. “He built guitars that were some of the most beautiful you’ve ever seen. Not to mention the way that they sound, and the way that they function and the quality craftsmanship that was involved in each one of his guitars.”

That aesthetic, carrying echoes of his native Japan, quickly won Sakashta the acceptance of the older, established guitar makers in the area, observes Chris Herrod, sales manager for Luthiers Mercantile. “The way they opened up to him was somewhat unusual because he was a young guy and wasn’t a typical member of the group. But his work was so excellent and his ideas were so good that he was welcomed into the group at a very high level.”

A frequent visitor to the Windsor supply house for instrument makers, Sakashta “would often give us ideas for new products,” Herrod adds. And in addition to being a regular exhibitor at the company’s biannual Healdsburg Guitar Festival, Sakashta reached out to invite other Japanese instrument makers to join in the event. “He did translation for them and helped arrange their travel and applications, and really helped us become an international event,” Herrod says.

Sakashta made both acoustic and electric instruments, and his Unicorn & Mustang mandolin was as sought-after as his guitars. “They’re all hand-built,” Mangrum says. “It’s not an assembly line. It was only him. And it would take him months to finish anything, sometimes even longer.” The completed instruments commanded prices of $15,000 to $25,000, sometimes more.

The Buddhist craftsman was also an enthusiastic rock and roll fan, with a special fondness for Kiss and, later, Robben Ford. Their relationship began when Sakashta made a point of seeking out Ford at Petaluma’s Mystic Theatre, and offered him an instrument, the blues guitarist recalls. “It was a beautiful instrument, but I told him it wasn’t for me. And he said, ‘Can I build you something else?’ And I said, ‘Sure.'”

After a couple of other not-quite-right attempts, Sakashta surprised Ford with the black “New Paul” solid body. It soon became Ford’s favored axe. “Given all the ingredients and all of my needs, which are very particular to me, he actually finally nailed it,” Ford smiles. “And no one else really had.”