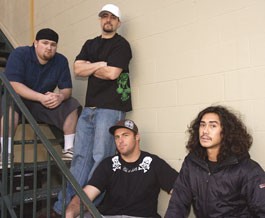 Meoff Weers can’t resist joking when asked what he hopes the Expendables will be able to accomplish with their new album, Prove It. “I hope,” the guitarist and singer says by phone, “we sell a billion records.”

For a group that literally began as a party band, such a response makes sense. But Weers does have some serious goals for the new album, released just last week. “I hope this album gives us a little bit more respect from you guys, the critics,” he says. “We kind of get hounded on for being just another ska, weed-toking, reggae-punk band. But I feel like we have a little bit more substance than that, and I hope this album kind of proves it.”

Prove It is the fifth album from the Santa Cruz band. By 2004, when the group had released their third CD, Gettin’ Filthy, the Expendables made a pivotal connection—with Slightly Stoopid. That ska-rock group took the Expendables on tour and eventually signed the group to its record label, Stoopid Records, releasing the Expendables self-titled CD in 2007.

Weers, in fact, credits Slightly Stoopid with inspiring the Expendables’ blend of ska and heavy metal. “I think the real eye-opener and mix of the music was [from] Slightly Stoopid’s Longest Barrel Ride album,” Weers offers. “There’s a song on there—I can’t remember what it’s called—but it goes from reggae to a metal thing. I was like, ‘Wow, that’s amazing.’ They never really did it much after that album, but I think we took that and then just created song after song after song that has that kind of flow between mellow to metal.”

The band is happy enough with Prove It that it began playing several of the new songs on its winter tour earlier this year. “We get tired of playing all of our old stuff, and the new stuff is really fun for us,” Weers says. “We all feel this is hopefully going to be our best album yet.”