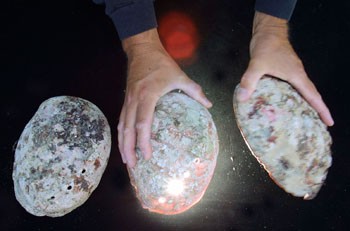 THE MULTIMILLION-dollar North Coast abalone industry is navigating some rough waters over a debate about a potentially deadly bacterium. For 13 months, the California Department of Fish and Game identified a Crescent City abalone farm as being the only source north of San Francisco of a bacterium known to cause Withering syndrome, a disease that has decimated the wild abalone stocks in Southern California. But it was only after Abalone International Inc. owner Chris Van Hook agreed to have his abalone stock destroyed did he and some Fish and Game Aquaculture Disease Advisory Committee members learn that the department itself, with marine biologists at Bodega Bay, may have unknowingly infected wild North Coast red abalone with the bacterium.

North Coast red abalone–which extend from the Marin and Sonoma coasts to the Oregon border–are believed to be some of the richest wild abalone beds in the world. Sport divers contribute millions of dollars annually to the economy through tourism.

The exact threat to the species is unknown. While Fish and Game officials say Withering syndrome itself has not been found north of San Francisco, a few wild animals have tested positive for the bacterium at Crescent City and at a Fish and Game-supported out-planting site at Van Damme State Park, near Fort Bragg.

The situation has sparked a bitter war of words within the North Coast abalone industry. Van Hook claims the department deliberately withheld the information so that it could point to his business as the cause if Withering disease became a problem. But Fish and Game officials insist there was no cover-up, and it is unlikely the department-sponsored out-plants were a source of the bacterium.

Now state and municipal officials are beginning to look into the matter. The Fort Bragg City Council is concerned enough about the threat to ask Assemblywoman Virginia Strom-Martin, D-Duncan Mills, for an independent investigation to determine the status of the disease.

Withering syndrome causes the foot of the abalone to shrink, making it unable to cling to rocks and forage for food. The mollusk eventually starves to death. It was discovered in the mid-1980s among black abalone in Southern California. Since then, black and white abalone populations in the region have declined an estimated 99 percent.

IN 1998, Carolyn Friedman, a Fish and Game pathologist at the UC Davis/Bodega Marine Laboratory, discovered that the rickettsia-like procaryote, or RLP, bacterium was the causative agent of Withering syndrome.

But three years earlier, in October 1995, some 50,000 cultured-abalone seeds were planted in six sites from Half Moon Bay to Fort Bragg, including Bodega Bay, as part of a University of California research project assisted by Fish and Game biologists. Some of the seed came from Bodega Farms. According to Fish and Game officials, seed from that facilty had previously tested positive for rickettsia, then thought to be a naturally occurring, benign bacterium.

Bodega Farms President Roy Gordon sits on the Disease Advisory Committee that recommended a ban on shipments to Van Hook’s farm in 1998 and, later, the destruction of his stock. But Van Hook and other committee members say they were never told about those out-plants during the hearings on what to do about Van Hook’s farm.

“Nobody mentioned that before recently,” says Dallas Weaver, vice chairman of the Fish and Game Disease Advisory Committee. “I do believe some of the decision making may have been different if we had more information earlier.”

The out-plants were part of a study to determine if wild stocks could be enhanced with farmed abalone. It was conducted by Laura Rogers-Bennett and Professor Emeritus John S. Pearse for the Institute of Marine Sciences at UC Santa Cruz.

The project was funded by abalone-fishing tax money managed by the department and overseen by Fish and Game senior biologist Kon Karpov.

The abalone seed was planted at Caspar Reserve, Van Damme, Salt Point, at two locations within the Bodega Marine Life Refuge at Bodega Head, and Half Moon Bay.

However, the scientists say the animals were never fully examined. It is unknown if any of the out-planted abalone were infected with rickettsia. But at the time, it was unknown that RLP caused Withering syndrome.

The bacterium was first found in wild North Coast abalone in August 1999, a year after Fish and Game implemented a shipment ban of rickettsia-positive abalone seed to farms.

Van Hook’s farm was the only business affected, since Bodega Farms was no longer raising the mollusk. He says he lost more than $300,000 because his farm could receive only younger seed that took longer to grow.

Under Van Hook’s urging, Fish and Game went to a privately funded out-planting site at Crescent City where five of 31 abalone tested positive for RLP. Van Hook said the seed from the out-plant came from Fish and Game’s Granite Canyon Marine Laboratory and other sources south of San Francisco.

However, Abalone International was still looked at as a source of the bacterium. On Sept. 21, 1999, the Disease Advisory Committee, at Van Hook’s request, recommended that his crops be destroyed. Van Hook says it would have cost the department $700,000 to reimburse him for the loss. Van Hook agreed to the destruction because “if we were the only point source, heck, we don’t want to be a part of it.”

After that meeting, Van Hook received a phone call from Fish and Game Senior Marine Biologist Fred Wendell. They were going to check another out-plant site at Van Damme. Six weeks later, Wendell e-mailed Van Hook about the other 1995 out-plants. Researchers then conducted two separate dives at Van Damme and found two abalone out of 134 were positive.

IN JANUARY 2000, the Disease Advisory Committee lifted the shipment ban to Van Hook’s farm and rescinded its recommendation to destroy his crops. Because RLP was found in Van Damme, and because of information researchers have learned about the disease, Wendell says he now believes, “It is more likely out-planted abalone than those from the Crescent City facility” that has infected the wild.

Van Hook accuses Friedman, Gordon, and others who knew about the out-plants of hiding the information. “Within 30 days of them acknowledging the Rogers-Bennett out-plants, the department was writing to me about lifting the ban,” Van Hook says. “That was how critical the information was.”

“I don’t think the disease committee would have recommended Chris’ stocks be destroyed, or that the ban have the immediacy that it did, had they known about the out-plant of the animals,” says Robert Hulbrock, Fish and Game aquaculture coordinator, who works as a liaison between the industry and the department.

Gordon and Friedman say they did tell the committee about the out-plants.

There was “certainly no cover-up,” Gordon says.

“Nobody is trying to hide anything,” Friedman adds.

Other Fish and Game officials agree information was not deliberately withheld. And they say the fact that the out-plantings were investigated only after Van Hook agreed to have his stocks destroyed was a coincidence.

Wendell and Friedman said lack of money prevented earlier testing of the out-planted areas, with each research dive costing approximately $650.

RLP, however, has not been found at other out-planting sites north of San Francisco, including Bodega Bay. Approximately 60 abalone from a third dive at Van Damme this January have also tested negative for the bacterium. Results from a fourth dive at Van Damme and seven other sites are not yet available.

Rogers-Bennett says the source of the Van Damme bacterium could have also been from other, undocumented out-plants, and not necessarily her project.

Wendell says that the low numbers of positive abalone after more than four years since the out-plants is encouraging, especially in Bodega Bay, as the bacterium seems to spread in warmer temperatures. “Just because they are infected doesn’t mean there will be mortality in Northern California,” he says.

The department will continue to monitor the out-planted areas annually or more often as funding allows, he adds.

But Pearse, of the Institute of Marine Sciences at UC Santa Cruz, says he was startled to learn that rickettsia was found in North Coast abalone. He notes that less than 1 percent of the out-planted abalone in the study survived, so the chances of it spreading is low. Still, he adds, the fact that approximately 1 percent of the Van Damme abalone tested positive is cause for concern. “If it’s anything like black abalone, it can sweep the population,” he says. “It may take some time.”

LAST YEAR, under Strom-Martin’s leadership, the state Assembly approved $500,000 for research to determine if there is a problem along the North Coast and to settle a claim filed by Van Hook. But the funding was rejected by the state Senate, says Mary Morgan, Strom-Martin’s senior consultant to the Joint Committee on Fisheries and Aquaculture.

On April 26, the Fort Bragg City Council, worried about the effect Withering Disease could have on the local economy, asked Strom-Martin for an independent study on the status of the disease on the North Coast. Mayor Jere Melo says the request is not a “head-hunting mission” about the out-plants themselves. But he is concerned about the potential effect of warm El Niño currents that could distress North Coast abalone and foster the disease. He also wants to know if there are any management decisions that can be applied to eliminate the threat.

“Given the abalone resource on the North Coast and given the impact on our economy from tourism, it is critically important” to conduct the research, says Morgan.

But with the state’s energy crisis rapidly eating up the budget surplus, she adds, funding is unlikely.

“I hope this event didn’t lead to permanent infection of these areas,” says Karpov, who notes that the best science practices were used at the time of the out-plantings.

“Right now, the best we can see, it’s been asymptomatic, no evidence of withering animals,” he concludes. Then he adds, “Keep our fingers crossed.”