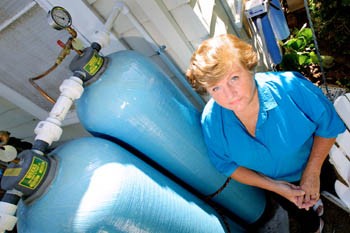 Not well treated: Lorraine Dickey is one of dozens of Santa Rosa residents who say the county is grabbing the mineral and water rights.

FOR 44 YEARS, Lorraine Dickey’s family relied on a well for clean drinking water and to irrigate her quarter acre of land on West College Avenue in Santa Rosa. Now she’s looking at spending hundreds of dollars monthly for city water because she learned late last year that her well was contaminated with tetrachloroethene, or PCE, from a dry-cleaning plant. “If I have to pay for city water for landscaping, I’ll have to go back to work,” says Dickey, 63, a retired office manager and one of dozens affected by the contamination.

Owing to a move that could have a far-reaching impact throughout the county, county officials say, Dickey and other area residents may lose their wells forever in exchange for the costs of receiving city water, even if the ground water can be cleaned and deemed safe again years from now and despite a filtration system.

State water quality officials are negotiating with the county as they warn against forcing residents to give up their water rights. Susan Warner, North Coast Regional Water Quality Control Board chief of cleanup and special investigations, said residents should be able to use the filtered water for irrigation. And she is concerned that neighbors will resist testing if they fear losing their wells permanently.

Twenty-eight homes of about 130 in the area of West College Avenue and Clover Drive have tested positive for PCE, which local health experts say is a possible carcinogen and has caused liver and kidney damage in animals at high dosages. The contamination is believed to be caused by dry-cleaning businesses that operated in the area over many years.

State regulators have determined 5 parts per billion of PCE is unsafe; wells in the area have tested as high as 576 ppb. Dickey’s is at 1.65 ppb.

The Santa Rosa City Council and the Sonoma County Board of Supervisors this month each committed $500,000 to install water mains so that the residents can connect to the public water system. However, Sonoma County Department of Health Services officials, citing current county policy, say wells testing above the maximum contamination level must be destroyed as a condition of connection. A recommendation to destroy the wells would be made for those showing contamination below 5 ppb, such as Dickey’s well.

Health Services Director Mark Kostielney claims the policy is necessary to prevent cross-contamination between private and public water supplies. He says double back-flow devices used to control the flow of contaminated well water can fail and pose a threat.

“It is, in fact, real that contamination can occur,” he says.

But Warner agrees with residents that cross-contamination is unlikely if the house plumbing is completely severed from the well and inspected annually. If any of the wells are determined to be actually spreading PCE, the water quality board has the authority to shut them down, she says.

TO THOSE living in the unincorporated island of west Santa Rosa, one of the poorest and least represented parts of the city, the wells symbolize their freedom and home ownership. Like the aquifers they draw from, water rights is an issue that “goes deeper than the surface,” says Clover Drive resident Jenny Shipp.

“Everybody has been living, loving, and trusting the water we’ve been drinking,” Shipp says. But everything changed last fall when they learned of the contamination. “Everybody was in a panic.”

As a result, residents are livid about how they are being treated by local officials. They say authorities knew about this contamination for years and didn’t tell them about the risks. Now, in addition to extra water costs, they are being expected to give up their rights without compensation before state water regulators conclude an investigation into the cause and cleanup options.

“We were here first,” says Dickey. “The city grew around us, and the city contaminated us.”

The Water Quality Control Board first detected PCE in wells north of West College Avenue in 1991, and then again in 1995. While the county health department and nearby residents were told of the contamination, those living south of the avenue were not notified because they were not believed to be at risk at the time, says Warner. However, public notices were published in local newspapers pursuant to Proposition 65, she adds.

Then in November 1999, a former gas station site south of West College tested positive for PCE at 37.3 ppb. Again, the health department was notified and a legal notice was published warning of the contamination and the need for further testing by state water quality experts.

But individual owners were not notified by county health officials, says Kostielney.

“You don’t make any kind of determination of notification of anybody until you determine the results [of lab work,]” he says.

A month later, in December 1999, state water quality officials went door to door to warn residents. Yet wells weren’t tested until August 2000, after funding was obtained. Filtration systems were installed on 14 wells. But they were considered a temporary fix until the city could provide water to the area.

Bob Harder, Santa Rosa deputy director of utilities, says there is money available to connect those residences having contaminated wells to the water system at an estimated cost ranging between $6,000 and $10,000 each. But those with clean wells must pay the connection costs.

THE NEIGHBORS SAY they shouldn’t have to pay the costs of obtaining safe water. State and federal legislators are seeking $2.5 million to assist with the connections, but any funding would go to reimburse the city and county first.

Dickey and her neighbors with contaminated wells have already lost their mineral rights, meaning they can never redrill. She is willing to take up the city’s offer and connect to the water system, without financial help, for domestic use rather than risk future condemnation. But she also wants to keep her filtered well water for irrigation for now.

“Once you lose it, you can’t get it back,” says Dickey.

Sharon Marchetti, a water technical specialist with St. Joseph Health System, says county officials are redefining the current policy for these residents. She says, and Warner confirms, that the county is allowing other contaminated wells to be used with filtration systems.

“No other county in the state is taking such extreme measures in terms of individual water rights,” says Marchetti.

Meanwhile, the state’s investigation continues. Water quality inspectors have identified the former Sonoma French Cleaners, at 946 West College Ave., as one source and are investigating two other businesses, Warner says. The city’s sewer system is also being inspected for possibly spreading the contamination.

And, as for legal recourse, residents aren’t likely to get their day in court–Claudette Gibbs, operator of Sonoma French Cleaners from 1984 to 1993, filed for bankruptcy last summer.