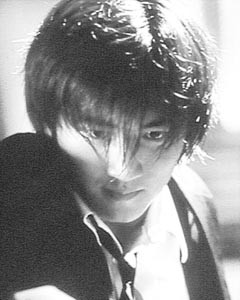 Tsui Hark turns the tide on the action genre

Time and Tide is classic Hark: it’s offbeat, playful, and exhilarating, as well as mindless. I dare anyone to try and make sense of Time and Tide’s plot, some convoluted, unwieldy nonsense about a reckless young Hong Kong bodyguard (H.K. pop star Nicholas Tse), his older, seen-it-all mercenary pal (Taiwanese rocker Wu Bai), their pregnant loves, and a gang of Brazilian mercenaries that wants both guys dead.

Perhaps there’s a purpose for the plot’s preposterousness. It looks as if Hark is trying to shoot for a critique of the action genre, much like David O. Russell’s Gulf War satire Three Kings, one of the most subversive action movies ever made (and of course, left off the American Film Institute’s inane, muddled “Top 100 Thrilling Movies” list).

There are shots reminiscent of Three Kings, which, in one of its most celebrated and imitated moments, took the camera inside a man’s chest to depict a bullet puncturing his lungs. In Time and Tide, the camera zooms through vents, down skyscraper air shafts, into the chamber of a gun, and, in the film’s niftiest and most memorable shot, inside a bomb explosion in an apartment building.

Hark’s attempt at a satirical actioner doesn’t go as deep as Russell’s Three Kings. Russell employed all those innovative visual and aural effects to indict the Reagan/ Bush-era war genre and the jingoistic mentality that spawned it, as well as to show what movies like Rambo and programs like The A-Team and the G.I. Joe cartoon avoided depicting: the ugliness of gunfire violence and the perspectives of both the enemy and the Third World civilian screwed over by the Americans.

When Hark uses the same effects, he doesn’t seem to have a point of view. It’s similar to how those effects are depoliticized and Jerry Bruckheimer-ized each week on Bruckheimer’s somewhat overrated detective show, CSI; they’re there because they just look cool.

However, Hark sure does know how to stage an inventive set piece. There’s a daring point-of-view shot of mercenaries quickly scaling down the side of a tenement skyscraper along wires, the cinematic equivalent of a roller-coaster drop.

The over-the-top climax juggles a high-wire scuffle on a concert arena skywalk, a gun duel, and a childbirth. For the aforementioned explosion sequence, Hark utilizes that Matrix “bullet time” effect to show objects floating in midair inside the explosion fire, one of which is a safe containing Tse’s character, who seals himself inside to survive.

Only Hark, the man who gave the world the gravity-defying “shadowless kicking” of Jet Li in the Once upon a Time in China series, could come up with an image so bizarre. And only he could concoct a story that’s such a head-scratcher. Time and tide wait for no man, and neither does this movie’s restless plot.