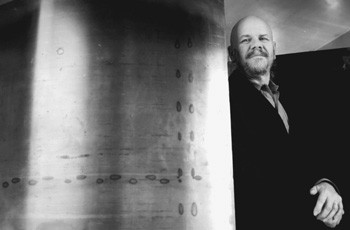 Artful Evolution: One of four new arts leaders in the North Bay, the Headland Center’s Gary Sangster is interested in the evolving conversation between artist, artifact and viewer.

‘I‘m not very interested in the preciousness of the artifact,” says Gary Sangster, an affable, articulate man with an Australian lilt. As one of the North Bay art scene’s new ringleaders, Sangster plans to bring art-with-a-capital-A back down to the realm of earthly understanding in his new role as executive director of Marin’s prestigious Headlands Center for the Arts.

Sangster, along with three other newly placed arts administrators, takes a hands-on approach to making art more accessible to the community. Not your typical arbiters of taste, the type who might speak a highfalutin’ language that complicates contemporary art beyond all comprehension, this set actually wants to demystify art, and they have the track records to prove they’ve already started.

Moving from the Headlands Center, Kathryn Reasoner takes over as executive director of Napa’s di Rosa Preserve, endeavoring to make it more available to the public. Intending to boost the economic health and visibility of Sonoma’s arts community, John MacElwee assumes the executive directorship of the Cultural Arts Council of Sonoma County. Finally, Patricia Watts takes the reins as chief curator of the Sonoma County Museum, where she aims to reflect Sonoma’s agricultural and environmental heritage through art.

Speaking by phone from his newly settled Sausalito office, Sangster considers his goals for the future. Set on the windswept coast of Marin and owned by the National Park Service, the Headlands occupies the barracks of a former military site, now a mecca for artists worldwide. Host to 40 artists-in-residence per year, the Headlands is a center that makes art, not war, and has earned international renown as a cradle for creative experimentation.

“In educated communities, there is an underlying assumption that people should understand art. I don’t think that’s the case,” Sangster says thoughtfully. “People can listen to sound and understand that it’s noise, but if you haven’t studied French, you won’t understand it. That’s the case with art.” Sangster plans to teach the language of art by bringing the public into contact with the Headlands’ residents and their processes.

Not surprisingly, his own background indicates a bent toward arts education. While teaching in the late ’70s and early ’80s at Newcastle University and the University of New South Wales in Australia, Sangster initially had trouble engaging his students with art history material. Finally, he discovered that, rather than offering slide presentations or even artist lectures, the class responded best when he invited artists to “bring art in their suitcases,” setting up small, temporary exhibitions.

Thus began his passion for curatorial work, and in 1989, he moved to the United States to take advantage of this country’s many museums, as opposed to the limited number in his native Australia. The same year, he become curator of New York’s New Museum of Contemporary Art and has since worked with museums all over the eastern seaboard, most recently completing a tenure at the Art Institute of Boston at Lesley University, where he served as dean and director.

While maintaining the Headlands’ stellar reputation, Sangster aims to bring it back to its North Bay roots by involving the local community in the process of art. He says that he intends to focus on relaying how artworks evolve to communicate variable messages according to the communities that receive them and to the idioms at work in the culture. This focus presents the North Bay an intellectually thrilling environment in which to decipher art as a coded missive.

The Headlands owes much of its status to Kathryn Reasoner, who occupied Sangster’s post until just last May. After 10 years of positioning the Headlands Center into the spot it presently enjoys on the global stage, Reasoner has moved on to propel Napa’s di Rosa Preserve to great heights as its new executive director.

Surrounded by the vineyards of the Carneros, Reasoner speaks by phone from the 217-acre preserve, a spread that houses three art galleries and a vast sculpture meadow. Reasoner, who majored in painting at UC Santa Cruz, explains that she “came of age during the art space movement of the ’70s.” Frustrated by the inflexibility of galleries that “boxed artists into predefined notions of art,” she and others stepped over to the “other side,” she says, creating organizations that would exhibit such innovations as performance and installation. Now, 25 years into her career, Reasoner describes herself as an “arts missionary.”

Referring to the collection’s eccentric founder, octogenarian Rene di Rosa, she says, “Rene has often talked about the importance of supporting artists of our time and place to understand who we are as a culture now.” This idea informs one of her main goals for the multigallery collection: to make it more accessible through public programs, education and publications.

Already, one no longer need make an appointment to visit the Gatehouse Gallery on weekdays. A prime site for rotating exhibitions, the gallery in February showcased the works of emerging Bay Area artists who have just received their MFAs. The spacious, waterfront structure resonates with refreshing and playful works, curated by Ann Trinca, including Mollie Oblinger’s Filum installation resembling a chain of ham and cheese rolls made out of felt and foam.

Outside of the Cultural Arts Council of Sonoma County, a colorful signpost-cum-assemblage points the way to various art venues in downtown Santa Rosa. Following the signpost straight ahead, one enters the Council’s gallery, currently featuring diminutive gems composing the “Northern California Small Works” exhibit. Above the gallery, the tall, bespectacled John MacElwee works in a sort of annex, obviously the site of “process” since he assumed the executive directorship of the Council in December.

Born in San Francisco, MacElwee performed as a jazz bassist with the Santa Rosa Symphony during the 1980s before doing development and marketing for the orchestra. He returns to Santa Rosa after years of marketing symphonies across the country. Most recently, he served as vice president of communications and marketing at the Detroit Symphony Orchestra, where he raised annual ticket income from $6.7 million to $10.2 million, an extraordinary feat considering the Motor City’s depressed economy coupled with the sagging ticket sales experienced all over the country.

Now he aims to boost the economic health of Sonoma County’s arts through a branding program that he hopes will eventually transform the county into as much a destination for arts as it is for wine. “Here, the wine and hotel businesses have a strong tourism industry. In the same vein, we want to describe the culture that makes Sonoma unique,” MacElwee says. “We’d love to see Sonoma County as well known for arts as it is for wine and natural places in 10 to 15 years.”

Dressed in earthy tones that match her focus on environmental art, Sonoma County Museum’s Patricia Watts breezes past a loud sculpture by Robert Hudson, pointing out how she plans to use the museum’s space to better show off its collection of work by environmental artists Christo and Jeanne-Claude.

Watts’ interest in earth and land art bloomed in the mid-’90s while developing an artists’ garden project for Santa Monica’s Museum of Creativity. Then in 1997, she founded L.A.’s ecoartspace, a nonprofit for environmental artists and scientists that reached out to the community with mobile activities, an effort she hopes to establish here. By instituting culturally based programs, such as ecology tours and performance-based lectures, Watts plans to create unusual opportunities for this community to participate in what she perceives as the vital intersection of nature and art. “Nature is creativity,” Watts reflects. “Creativity is survival–how we respond to problems and problem-solving.”

As expansion plans for the museum’s building are taking shape, Watts sees an opportunity to also broaden the museum’s audience. She wants to highlight the county’s unique ways of dealing with specific issues relating to agriculture, farming, water and energy. “We have a real opportunity to develop a museum that could be internationally of interest. Sonoma County offers a lot of interesting models for sustainable living and organic farming. This could be an exciting place to have a museum under the same kind of lens.”

Sangster, Reasoner, MacElwee and Watts not only have similar ideas about art’s role in the community, but the four even share some aesthetic sensibilities. For example, the works of Elisabeth Higgins O’Connor, an emerging artist who makes giant, imaginative creatures out of afghans, pillows and cement, simultaneously appeared in both the Headlands’ Close Calls and the di Rosa’s MFA shows. Indeed, it seems that a harmonious, collaborative and lively era may well be in store for the North Bay art scene.