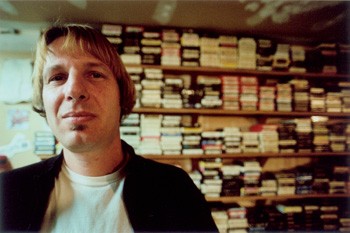 The Collector: Steve Ciaffa’s personal forte is his collection of punk on 8-track.

In praise of the 8-track, bastard stepchild of formats

When I meet with Steve Ciaffa in his garage, the first thing he hands me is a list of eight noble truths. Listed among them is such enduring wisdom as, “State of the art is in the eye of the beholder”; “New and improved doesn’t necessarily mean the same thing”; and “Progress is too often promises, promises to get you to buy, buy.” With recent trends in music defined by format over content (witness the feverish rush toward the universally revered iPod), finding someone who reveres antique technology can be a huge relief.

Ciaffa, a fun-loving, articulate collector of music, owns thousands of albums on what is commonly viewed as the crappiest of all music formats: the 8-track tape.

Eight-track tapes, which were dominant in the 1970s until just about every single one was seemingly chucked out of the window of an El Camino, suffered badly from high cost and cheap manufacturing. The car-friendly tapes were inadvertently built, by way of design, to either disintegrate or otherwise malfunction, and many an 8-track tape seemingly met the same fate: crushed on the road, its innards strewn, sometimes for miles. When more durable options arrived, 99 percent of all 8-tracks went directly into the trash.

So why would anyone obsessively fill a garage with them?

Ciaffa fishes out the first two 8-tracks he ever owned, tapes that his dad brought home one day from his job selling motor homes, which, in 1972, came equipped with 8-track players. “These are kind of totemic here for me,” he says, pulling out Burt Bacharach’s Make It Easy on Yourself and its polar-opposite, Harvest by Neil Young. “This is a pretty heavy album for a 10-year-old,” he says, clutching Harvest, “and this 8-track definitely changed my life, for sure.”

Over the years, thrift stores and garage sales helped Ciaffa’s collection grow modestly, 25 cents at a time. On a few occasions, he thought about getting rid of them altogether. In 1996, when he bought a computer, his first query on the World Wide Web was about 8-tracks. “I found this huge community of people collecting and trading 8-tracks for really cheap,” he excitedly recalls, “and I don’t know, something kicked in.” In one month, his 8-track spending skyrocketed to $275.

Browsing through Ciaffa’s walls of 8-tracks, one finds certain curious anomalies: in the sea of Foghat and Donna Summer, there are some still-sealed tapes, never listened to (Lou Reed’s Metal Machine Music); only two tapes with a UPC code emblazoned on the spine (the J. Geils Band and the Motels); and ’70s compilations with titles that have become part of our cultural landscape (Boogie Nights and Mellow Gold). It’s interesting to see later titles, such as the Platoon soundtrack from 1987 (record clubs kept 8-tracks alive until about 1989), but stranger still is the sheer variety of music that made it to 8-track in the first place.

In addition to avant-garde jazz albums (Coltrane’s Meditations, Pharoah Sanders’ Jewels of Thought, Mingus at Monterey), ambient college radio shows from the mid-’80s and a wingnut spoken-word speech (The UFO Message)–none of which really fit the AM-radio mold that 8-tracks have grown to represent–the garage hosts title upon title of an unlikely genre and Ciaffa’s collecting forte: punk rock.

“I think that’s part of what really fascinates me about it,” he says, motioning to 8-tracks of the Ramones’ Road to Ruin, the Dead Boys’ Young Loud and Snotty and the Rezillos’ Can’t Stand the Rezillos. “It’s out of place, it’s a non sequitur.” Ciaffa lists among his most treasured 8-tracks the Stooges’ Funhouse and the Sex Pistols’ Never Mind the Bollocks. There are certain tapes that Ciaffa listens to over and over again, usually while working in his darkroom, tapes he claims actually sound better on 8-track: the Stones’ Exile on Main St., for example, Love’s Forever Changes or Patti Smith’s Horses, of which he owns numerous copies.

Ciaffa’s skill as an 8-track repairman has been learned through necessity, over years of fixing broken tapes. He demonstrates on the workbench the basics of opening the shell, replacing the sensing foil, checking the pinch roller and testing the felt. In a cross-pollinating Warholian spirit of product-as-art and vice versa, Ciaffa has even home-recorded and packaged replica 8-track tapes of some of his favorite CDs by Yo La Tengo, Guided by Voices and Sonic Youth, fully functional on any player. “Part of it is purely humorous,” he says, “it’s just kind of an odd thing to do.”

These mechanical inclinations have also helped him fix some old, stylishly designed, portable 8-track players. His collection includes the Panasonic Dynamite 8, known widely as “the plunger” (“It’s a visual icon of the ’70s, definitely,” Ciaffa enthuses); the Aquatron VX-33A, manufactured by the Brother typewriter company, featuring a suction bottom intended to stick to the fiberglass shell of a boat; and the Weltron 2001, a round, futuristic space-helmet device. All three make the iPod look like the most boring thing in the world.

“I look at this wall of 8-tracks here, and I think, you know, ‘Talk about a bunch of worthless junk,'” he admits. “I mean, it’s like the bastard stepchild of formats. It’s always laughingly referred to, and it still is used today in the media; if they’re trying to convey something as an obsolete technology, then it’s ‘going the way of the 8-track.'”

Not surprisingly, Ciaffa doesn’t much like the idea of MP3s. “It takes all the mystique out of music,” he says. “To me, music is a tactile thing.” He’s optimistic that the dream of 8-tracks as a sleeping collectible will one day come true, when the rest of the world rushes to reacquire a soulful musical format that had been mistakenly thrown out for good.

“But then again, who wants them?” he asks, his eyes rolling across the piles as Dr. John clunks, yet again, to track three in the background. “They have this cast-off aura to them,” he sighs. “I really don’t think there’s ever going to be any kind of a revival.”

Which is too bad, considering the eighth noble truth on the list of truths: “Innovation alone will not replace beauty.”

More information than you could ever possibly imagine about 8-tracks, including some of Ciaffa’s own detailed contributions, can be found at www.8trackheaven.com.