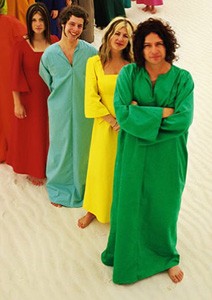 Together We’re Heavy: The Polyphonic Spree are big on togetherness.

Rock reflects the singular in the collective

Elvis Presley once reflected, “Sometimes I get lonesome, right in the middle of a crowd.” That sensation has defined a duality in rock ever since: in the rock experience, a powerful desire for community expands the music but clashes with a creeping sense of isolation.

Expressions of community and isolation have been opposing but parallel threads since rock’s early years. Sam Cooke’s lively, extroverted “Havin’ a Party” sounds like a rebound off Ben E. King’s stark, self-absorbed “I (Who Have Nothing).” The Youngbloods’ warm-fuzzy sing-along “Get Together” and the Who’s rally call “Join Together” are foils to the recalcitrant alienation of Simon and Garfunkel’s “I Am a Rock” and the Rolling Stones’ “Paint It Black.”

In the ’70s, anthem-prone stadium-rock supergroups and reflective singer-songwriter solo acts rose to prominence at the same time. When alienated punks sought to distance themselves from both of those forces, they created their own thriving alternative community.

Does rock music still hold a duality that finds greater togetherness at odds with inward solitude? In current rock, the dual impulses for community and isolation are manifest not as opposing threads, but are instead emerging as a single connected thrust. Artists are acting like they want to reach out and retreat at the same time, using larger, busier, more universal sounds in tandem with intimate detail and individuation.

The so-called Memphis soul sound of the new Cat Power disc The Greatest is simply moderate instrumental lushness padded on her usual tender minimalism. It’s as if Chan Marshall wants a fuller sound to signify a best effort to reach out in a way that doesn’t dislodge her self-effacing confessions. Kentucky rockers My Morning Jacket also link an expansive, robust style with a private vibe. Lauded for a full-bodied blend of roots-rock and power pop, their recent discs It Still Moves and Z also bury their rich sound in so much reverb it sounds like the band are hiding at the end of a tunnel.

The noise-punk field demonstrates a desire to project absurdly enormous music from the smallest sources. The biggest bluster in that genre is typically made by duos or solo acts. A smaller-becomes-bigger aesthetic is also typical of new singer-songwriters like Sufjan Stevens, whose recent disc Illinoise is sublime and character-focused, but also majestically and colorfully orchestrated. It’s the second in a 50-disc series about each state, with Stevens seemingly intent on making personal indie rock about everyone.

Rock’s newly singular communal/individual impulse is also evident in the names and manners of numerous hip indie acts. Animal Collective are a conventional four-piece whose members live in four cities on two different continents. The Go! Team are a British mix-pop combo that alternates lead vocals by black and Asian women. The Polyphonic Spree are essentially a high school choir backing a simple band, with a 2003 album titled Together We’re Heavy. Broken Social Scene are a rag-tag Canadian collective that sometimes features up to 21 revolving members.

Broken Social Scene could be the poster act for rock’s current tendency to synchronize themes of community and isolation. Their often quiet, often rattling 2005 disc Broken Social Scene (their 2003 disc is titled You Forgot It in People) is built from careening alt-rock peppered with chirping oddities and varying focal points. Song titles like “Our Faces Split the Coast in Half” and “Windsurfing Nation” imply ideas about groups of loners.

The booklet in Broken Social Scene has a combined sense of separation and sharing. Rather than lyrics, each song has a strange character drawing and lists sets of instructions about relating to bits of the music, other band members and random emotions. One such instruction tells whoever to “try to make it sound like Bob Seger on acid.” That connection is tough, since Seger’s music is a hugely generic group-hug, while psychedelics are intensely micropersonal. But this combination just brings rock back to the problem that faced Mr. Presley: the rock experience might make you feel alone in a crowd.