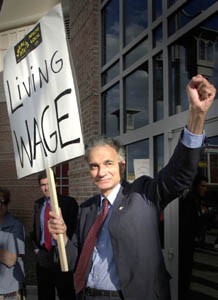 Important events as reported by daily newspapers and summarized by Daedalus Howell.

The Argus-Courier reports that a Petaluma police officer investigated a charge of assault by a woman whose husband had burned her with a cigarette butt during an argument. The firebug hubby said that his wife had thrown a drink on him (boohoo), so he threw a lit cigarette at her. The cop, doing the math in his head, determined the woman to be the “primary aggressor,” perhaps because, statistically, more people are harmed in liquid-related incidents (i.e., drowning) than in those that involve flame. The wife was arrested for domestic violence, and progress continued unfettered.

Petaluman Kathie Hewko knows how to stroke. Voted the most likely local to escape from Alcatraz, Hewko braved the murky waters of San Francisco Bay when she swam from Fort Point in San Francisco to Lime Rock in Sausalito for the 25th time last weekend, reports the Press Democrat. The perks? Seeing the underside of the Golden Gate Bridge while doing the backstroke. The 54-year-old Hewko swam the mile span in just under 40 minutes. No word if she’ll next brave the H20-way of her hometown slough, the Petaluma River.

“We Have Issues,” blared a sign spied at the first Sonoma County Youth March on Saturday that ended with a rally at Courthouse Square in downtown Santa Rosa. When interviewed by the PD the teenager toting the sign recapitulated her plight, “I have a lot of issues.” By far the youth with the most issues, however, was the lone Republican problem-child adrift in the sea of aspiring Democrats (just gotta be different, don’t ya?). The 16-year-old, bedecked with a Bush/Cheney pin on an epaulet of his crisp brown shirt, pulled a swath of blond hair behind his ear, fixed his piercing blue-eyed gaze, and decried his classmates for being “liberal by default.” The drone added, “In California, young people are supposed to be liberal.” At least young people who expect to become old people–the PD failed to report whether or not the Bush Youth droid survived the suffusion of positive energy wafted his way by his peer group. Though turnout was a far cry from the 200 expected, the event’s 17-year-old organizer wasn’t fazed. “I believe apathy is a habit,” she said. Apparently, most of her comrades had the jones. Rep. Lynn Woolsey, D-Petaluma, was on hand to siphon some of the young blood, commenting that “young people have so much to add to our political life.” Like another four years in office–when they can vote.

Napa skate rats can exhale a collective bong-hit of relief–their skate park was spared becoming a much-needed parking garage for an expanded Cinedome because it’s too expensive to move a sewage pump station that shares the park’s block, reports the Napa Valley Register. Interestingly, before civic-minded city officials recognized that skaters had needs too, “parking garage” in local skaters’ jargon roughly translated as “skate park.” “Sewage pump station,” however, still means “the big shit machine we blithely frolic near.”

The Santa Rosa daily reports that beachcombers looking for a cheap high are advised to forgo Bodega Bay clams, which state officials believe are contaminated with a natural strychninelike toxin that can cause drunklike symptoms–and death. A quarantine of the shellfish has been in place since September, but may be lifted as soon as scientists figure out a way to make money off of them. A director of environmental health services for the Sonoma County Health Department says clam imbibers will often “feel funny,” though most “weather through it, and there’s nothing more to it.” Except the telltale shells of a clam habit.

Strange habits die hard, continued: Terra Linda High School Trojans tight-end Steve Carter admits he tucked a miniature chocolate football into the waistband of his pants at the start of the 2000 season, reports the Marin Independent Journal. The little brown pellet had been sitting in a glass on Carter’s dresser since a victory over a rival team at the end of last year’s season. “I don’t think I’m going to be eating it–I’m holding on to this one,” Carter said of the talisman after recently besting the same rival team. Donations for Carter’s psychological counseling fund can be sent in care of Terra Linda High School.

Thin-skinned Naderistas, who have a hissy fit every time this publication breathes so much as a word about Green Party presidential candidate Ralph Nader’s impact on the upcoming general election, will love this Associated Press item that ran in the PD. In an article that advises, “The race in California is less stable than anyone expected,” the AP notes that “Nader’s effect on the re-election has not been lost on GOP strategists.” Indeed, California Republican Party spokesman Stuart DeVeaux proclaimed in a recent news release, “Go Nader Go.” Sure, you can vote your conscience, just don’t whine too loudly when your conscience suffers a setback after eight years of Bush-league governance.