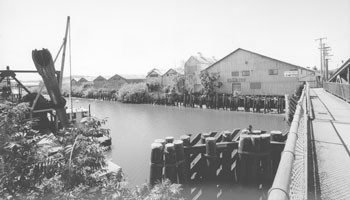 Those big plans for Basin Street Property’s ambitious development of five blocks along Petaluma’s blighted downtown waterfront are on hold until city officials formulate planning policies for the area. Company president Bill White says the city must still sort out issues regarding historic preservation, parking, and traffic in the plan area. Under the plan, Basin Street would construct a hotel and cinema; office, retail, and residential buildings; and a parking lot on the west side of the Petaluma River near the Turning Basin. After nearly three years of delays, White had planned to submit his applications for the much-anticipated project in December. Basin Street’s plans are a key part of a 396-acre redevelopment project intended to revitalize the area.

Santa Rosa–a city known for public officials who seem to discourage the proliferation of fun (witness the dearth of night life in that city of 142,000)–is now putting the dampers on another all-American tradition: charity car washes. Claiming that the runoff from such events pollutes local creeks, city officials are telling local cheerleaders to scrub the car washes by the spring of 2003. Cheerleaders say the ban will hurt their fundraising efforts. City officials are standing firm and hinting at legal action if the girls continue their actions. “It is a [misdemeanor] violation of our storm water ordinance to have a charity car wash and let all the soapy, cruddy water into our creeks,” Colleen Ferguson, an engineer with the city’s Public Works Department, told the local daily. “We’re trying to keep the creeks clean, and having a concentrated flow [of contaminants] where cars are washed isn’t good for the creeks or the fish.” Rah-rah-sis-boom-bah, indeed.

While emphasizing that Marin County is far from a major supplier of illegal methamphetamines, local law enforcement said in a published report this week, the bust of a makeshift meth lab north of Novato earlier this month indicates that the local manufacture of crank is on the rise. A tip from a distributor arrested in Wyoming last month led to the arrest of a ranch hand in connection with the lab at the Silveira Ranch, north of Novato. Police say the lab was capable of producing hundreds of pounds of the drug, according to the Marin Independent Journal. Meanwhile, law enforcement officials add, most of the meth manufactured in the North Bay continues to pour in from Sonoma County. The bulk of the drug in the area is cooked in so-called superlabs in California’s Central Valley.

Good news for commuters. The $10 million high-speed ferry M.V. Mendocino joined the Golden Gate Bridge District fleet this week, pulling into the Larkspur ferry terminal after a 30-minute run from San Francisco. The new ferry–which can cruise at 36 knots–can complete the trip 15 minutes quicker than the older ferries. Like its other high-speed counterpart, the Mendocino has two passenger decks and can hold 408 people. With the addition of the new boat, the number of high-speed trips on the weekday commute run has increased from 16 to 26, including five of the six morning commute trips and six of eight evening commute trips.