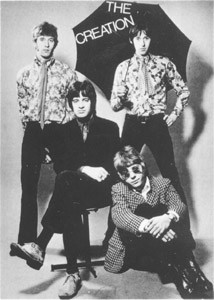 FOR A NATION that wasn’t big on garages (thanks to the popularity of rail lines, small cars, or no cars at all), England sure did produce a lot of garage bands. And here they are, in all their punkish glory, compiled on Nuggets II: Original Artyfacts from the British Empire and Beyond, 1964-1969 (Rhino). This four-CD set is the latest in an enduring franchise that started in 1972 when Patti Smith and guitarist Lenny Kaye–a major garage-rock freak–assembled a two-album collection of ’60s garage rock that included fuzz-fried and psychedelia-steeped songs by the Shadows of Knight, the Standells, the Count Five, the Amboy Dukes, and other legendary proto-punkers, all mostly raw and unprofessional and mostly one-hit wonders.

Over the years, Rhino Records has reissued that original Nuggets album as a pair of beefed-up single CDs and later as a four-CD box set with a bunch of extra tracks, some nifty, some decidedly forgettable. Nuggets II is surprisingly strong (a single CD sampler sent to radio stations kicks ass); such songs as “Everything (That’s Mine)” by the Dutch band Motions bristles with mod grooves and explosive art-pop guitar solos. And there are some relatively big names among the pack, caught in their apprenticeships, including a young Van Morrison (post-Them), Jimmy Page (with the Primitives), David Bowie (then Davey Jones), the Rolling Stones’ Ron Wood (with the Birds), the Bee Gees (backing Australian singer Ronnie Burns), and the Small Faces, which morphed into Rod Stewart’s first band. Other ragged rockers showcased here in their early years include guitarist Steve Howe (later of Yes), who pops up with Tomorrow on the Pink Floydish ditty “My White Bicycle”; Beatles producer George Martin, who supervised the studio for the Action, who offer a raucous cover of the Marvelettes’ “I’ll Keep Holding On”; ELO headman Jeff Lynne (who more recently got to produce the Beatles’ comeback singles), contributing vocals to the Idle Race’s “Imposters of Life’s Magazine”; pub rocker Dave Edmund with Live Sculpture; Led Zeppelin bassist John Paul Jones, doing a stint with the Poets; and John’s Children, featuring guitarist Marc Bolan of T Rex.

A few of these bands–Los Bravos, the Small Faces, the Easybeats (whose “Friday on My Mind” climbed to No. 16 on the U.S. charts)–broke through to a mainstream audience. But most of these bands–the Pretty Things, the Kaleidoscope, the Move–languished in the shadows of the Beatles, Rolling Stones, Kinks, Dave Clark 5, and other big-name Brit acts, barely noticed in the backwaters of the British Invasion.

Still, these are the cream of the underground R&B rave-ups, psychedelic soul, Motown dance grooves, and teen anthems that surfaced in the wake of the unfathomable success of the initial Nuggets box, what compilation producer Gary Stewart calls “the fruits of decades spent reading fanzines, attending record swap meets, bidding at vinyl auctions, and other forms of dysfunctional record-collecting-as-lifestyle behavior (all too perverse or embarrassing to recount here but captured well in the film/novel High Fidelity).”