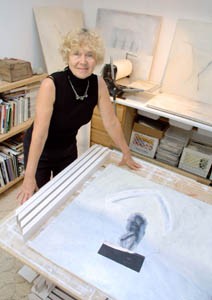 IF THERE’S one thing to be learned from years of posing dumb questions to visual artists, it’s that they generally like to talk. Words, big words, multisyllabic words with obscure Latin roots that some reporters couldn’t begin to spell well enough to even look up in the dictionary come spilling out. After all, an artist’s work is solitary and meditative, and the mind is deep and willing.

Yet by any definition, Guerneville printmaker Inya Laskowski is a master. Explaining the genesis and thought of the 10 works contained in “Songs of Munnin and Hudinn,” her exhibit of encaustic monotypes opening Sept. 14 at Gallery Route One in Pt. Reyes Station, the Austrian-born Laskowski is by turns lyrical, philosophical, and almost frighteningly well-read.

One can only nervously sip a ginger beer in the two-room Russian River studio that serves as her live/work space, nod with a false sagacity, and take furious notes. And one can still probably fail to get it right.

“I am interested in a visceral philosophy,” Laskowski says, pulling almost-finished works off the studio floor and into her living area. “The thoughts and experiences that have come out in my art are something that can be perceived viscerally rather than by the mind. I want them to hit you at a gut level.”

The creamy, thick paper with which Laskowski works is first imprinted with paint worked onto her press. Then she adds collage elements drawn from discarded previous prints–a rusty bit of tin or pieces of string. Finally, she covers each work with a luscious, muting flow of encaustic wax.

Her prints marry abstract concerns to the shocking refreshment of a recognizable form, the ghostly overall color scheme reminding one of painter Agnes Martin’s ability to wring a prism of hues from the color white. The resulting art is secretive, quiet, and minimal–yet manages to strike the gut as hard as a depiction of screaming orange warheads.

But if you’re not up on your biblical or Norse lore, you may not see what Laskowski does. For example, the “Munnin and Hudinn” from the exhibit’s title are ravens drawn to the god Odin’s side as advisers. Munnin is memory; Hudinn, thought. How do memory and thought drift up through the beeswax filter of one’s consciousness? How can such ineffables be known?

“I don’t know how I feel about attempting to make a representation of such things,” Laskowski admits. “I’m striving toward another language, one of form and color–stutterings in the dark, like the ‘Om’ in the temple.”

The temple in this instance is Gallery Route One. Stringent in its membership admissions, this 16-year-old cooperative gallery is run by and for artists and serves the tourist-bulge of Pt. Reyes, drawing visitors from around the Bay Area and the world. Laskowski was admitted as a member a year ago and now curates the small “annex” room off the main galleries.

“In this modern world, people have lost the knowledge that creativity is a birthright,” she says, explaining not only her gallery work, but also her devotion to teaching children’s art classes in Santa Rosa schools.

“We as human beings need to go into gentleness,” she continues. “We’ve been so cruel for so many hundreds of thousands of years, and our brains are better than that.”