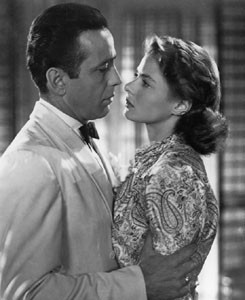 Love Hurts: Should children be protected from such horrors as the love gone wrong depicted in ‘Casablanca’?

‘Joneses’ just says no to everything

H. Rap Brown–the 1960s apostle of black power–became an overnight sensation when he declared, “Violence is as American as cherry pie.” He might have added, “Censorship is as American as cherry pie.” Now, in the wake of Bush’s reelection, it seems as if the First Amendment exists merely to entice, tease and torment. Indeed, almost everywhere–from the White House to Wal Mart, from academia to ABC TV–censorship and even self-censorship have seeped into mainstream American life.

Even where you least expect to find it, as in Tim Stafford’s Never Mind the Joneses: Building Core Christian Values in a Way That Fits Your Family (InterVarsity; $16), a new, seemingly innocuous guidebook for decent Christian folk, censorship occupies a pivotal place–next to Godliness and cleanliness. Stafford, a Sonoma County resident and senior contributor to Christianity Today magazine and author of Knowing the Face of God, doesn’t exactly link arms with the radical wing of the Republican Party, but he comes awfully close. Moreover, his book suggests the extent to which censorship has been turned into an American virtue meant to protect us from the evils of the mass media. Hollywood and the Internet are to blame, stupid!

“Popular culture–television, movies and music–displays terrible corrosive morality,” Stafford chides. This is the sort of blanket statement that appeals to red-state Americans and even to liberals fed up with the cultural wasteland on Fox and elsewhere. What Stafford doesn’t seem to notice, or perversely refuses to notice, are the redeeming qualities of popular culture. Of course, it’s precisely the irreverence of The Simpsons and Team America–their failure to keep faith with Christianity–that makes them so appealing and so dangerous in the eyes of conservatives.

Like a good minister, Stafford urges reverence for God, truthfulness, hard work, Bible study and prayer. In keeping with the new Christian right, he denounces homosexuality–along with drugs, drunkenness and gossip–as the devil’s work, and praises virginity as “a really wonderful phenomenon,” unwilling to note that the loss of virginity might be an equally wonderful phenomenon.

Moreover, in chapter after chapter, he finds a way to bring up the subject of censorship. Parents might well prevent their children from watching the 1944 Humphrey Bogart and Ingrid Bergman classic Casablanca, he suggests, because–oh, dear!–they’d see that lovers sometimes go separate ways and that politics makes for strange bedfellows. It occurs to me that Casablanca, with its idealistic antifascist cast of characters, just might be what kids growing up on the war in Iraq ought to watch. And if they come away with fewer illusions about romantic love, so much the better.

Of course, Rick Blaine, the American exile in Casablanca, belongs to a tradition of hard-drinking, cynically sentimental rebels, and Stafford goes out of his way to dismiss rebels with and without causes. In a chapter titled “Submission,” he celebrates what he calls “proper submission” to the power elite–as though Christ himself never rebelled against the Roman Empire.

In the chapter “Sexual Fidelity,” Stafford advises that “children and young people should have their Internet content censored,” ignoring the fact that parental censorship practically guarantees that kids will read that which they’ve been warned thou shalt not read. It happened that way in the 1950s, when parents, senators and Christian ministers tried to prevent teenagers from reading comic books, causing comic books to bounce back bigger and bolder than ever before.

Stafford believes that his own children, who were born and raised in God-fearing Santa Rosa, are better off today because they didn’t watch television. Would the rest of us be better if we didn’t watch TV, abstained from sex, worked hard and prayed hard? Ask the Muslim fundamentalists. They might well applaud Stafford and urge the Arab faithful to keep up with Joneses just like his own.

Meanwhile, we’re in store, it seems, for more violence and more censorship. And why not? They’re as American as cherry pie.

Jonah Raskin is the chair of the communication studies department at SSU and the author of ‘American Scream: Allen Ginsberg’s “Howl” and the Making of the Beat Generation.’