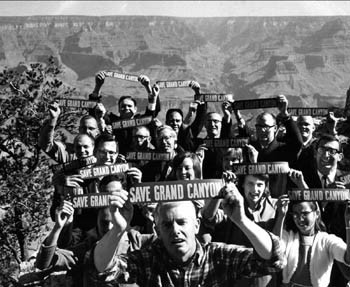 Environmentalist David Brower and the fight to save the earth

Imagine the entire swath of the Pt. Reyes National Seashore as little more than a rich folks’ resort of luxury seafront homes and shudder. Picture water-skiing right down the ruined alleyways of the Grand Canyon with thousands of others. See the Yosemite Valley criss-crossed with cement and streaming with smoking ribbons of cars in all directions. Wonder what Glen Canyon must have looked like.

Dammed by the Army Corps of engineers in 1956 to better hold Colorado River water for the thirsty state of Arizona, the Glen had ancient native hieroglyphs etched into its walls, deep green fens flourishing in its tall shade and was, the late environmental activist David Brower once declared, the most beautiful place he’d ever seen.

Generations have multiplied since the Glen met a watery grave; generations have lost something elemental to the earth. David Brower vowed that this wouldn’t happen again.

The leader who catalyzed the Sierra Club in 1952, becoming its executive director and changing its nature from that of a hiking enthusiast’s gathering to a major political force, ushering in what we now call the environomental movement, the Berkeley-born Brower–who died in 2000 at the age of 88–is brought back to the ferocity of life in a new documentary, Monumental: David Brower’s Fight for Wild America, screening as part of the Wine Country Film Festival.

Cannily using footage Brower himself took of trips through Yosemite and other of his most beloved places, Monumental most passionately describes the fights Brower lead to save the Grand Canyon from additional damming; the quest to make Pt. Reyes into the protected spot it is today (Ladybird Johnson in pill box hat and heels standing near the surf, breathing in deep admiration); and the creation of the Redwood National Park on the high North Coast, protecting the oldest living things on earth.

Brower, the father of four, was perhaps not the easiest man to get along with, and his crusty side is ably shown in Monumental. But he brooked no cowardice and bore no compromises. His split with the Sierra Club in 1969 over their willingness to compromise over the Central Coast’s Nipomo Dunes, some of the most pristine sand hills in North America.

While Monumental never explores those aspects of Brower that earned him the “Arch Druid” nickname, what this documentary does do splendidly is to underscore how just one man, a handful of people and a pokey little organization for hikers and bird watchers can indeed change the entire face of a nation by simply not allowing it to change.

‘Monumental: David Brower’s Fight for Wild America’ screens on Sunday, Aug. 8, as part of the Wine Country Film Festival. Filmmaker Kelly Duane and Brower’s son Ken, an activist in his own right, will discuss the film and Brower’s legacy following the screening. Sebastiani Theater, on the Plaza, Sonoma. 3pm. $8. 707.935.FILM.