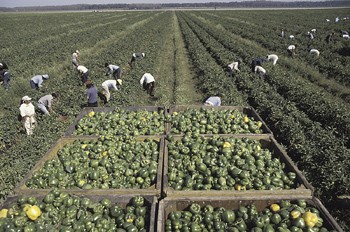 Back-Breaking, Heart-Breaking: With the work seasonal and low-paying, the average migrant worker in the U.S. earns just $7,500 per year.

When it comes to the National Agricultural Workers Survey, the answer is no one

It’s hard to track the lives of migrant workers. They move around a lot, often speak little English, and since many of them are illegal immigrants, are often reluctant to answer questions. The details of their living conditions, such as housing and healthcare, can therefore remain somewhat of a mystery. Now the only source of government information about this murky population has been put on hold.

The U.S. Department of Labor has suspended the National Agricultural Workers Survey (NAWS), which sends researchers into the fields to question over 4,000 workers about issues such as wages, benefits, housing, healthcare, immigrant status and working conditions.

Since wine country employs an estimated 16,500 migrant workers, NAWS regularly includes data from Sonoma and Napa counties in its research. Established in 1986, the survey was originally created because so little was known about this important segment of the U.S. workforce.

“Before we had the NAWS, it was very hard to reach the migrant workers,² says Chris Kelsch, executive director of the California Institute of Rural Studies in Davis. “In terms of survey research, it’s easy to reach someone via telephone or at home, but the farmworkers are always moving. NAWS developed a creative way to reach them, and it has had a big impact.”

Costing only $2 million per year, the NAWS gets a lot of bang for the buck. It is a key source for determining on what the federal government should spend the $1 billion a year it allocates for migrant workers. Schools, healthcare programs and other nonprofits use the information to determine how to best serve farm laborers. Researchers commonly use NAWS data in studies.

“Ultimately, something like healthcare is really decided from the top, by the federal government,” says Ketty Mobed of UC Davis’ Western Center for Agricultural Health and Safety. “So something like the NAWS can be very political.”

Why the Department of Labor suspended the survey is unclear. Initially, it said it was canceling the survey as a cost-cutting measure.

“My gut feeling is that they just didn’t think about what they were doing before they did it and were just looking to cut costs,” says Kelsch. “There was a large contingency of folks protesting the cancellation, so the department may be backpedaling a bit.”

Homeland Security’s mission includes tightening cracking down on illegal immigration. According to the NAWS, U.S. agriculture is increasingly dependent on illegal immigrants. In 1998, over half of farmworkers were illegal, compared to only 12 percent in 1990.

Some experts have suggested that the change may have to do with President Bush’s temporary worker program, which would allow immigrants to legally work in the U.S. without gaining citizenship or permanent resident status.

But stopping the only major source of information on migrant workers would not necessarily help the program, explains Mobed. “If the Bush administration wants to make such a large change in the labor law, they need as much information as possible to present it to Congress, so stopping the survey would not really serve their purposes,” she says.

The Department of Labor says that one reason it suspended the survey was to investigate the large time lag between when the information is gathered and when it is released to the public. The most recent NAWS, released in 2000, covers the 1997­1998 period. The next NAWS, which will be released in upcoming months, will cover the 2002­2003 period.

The 2000 NAWS revealed that approximately 61 percent of farmworkers live below poverty level, making an average of $7,500 per year. Because there is an oversupply of labor, work is scarce for many people. Over 60 percent of workers get only one job a year. On average, workers are employed for less than half the year. Only 20 percent have received unemployment benefits.

In terms of assets, the NAWS shows that migrant workers are buying fewer houses. In 1990, one-third of all migrant workers owned a home. In 1997-1998, only 14 percent owned a home. This problem is likely worse in the North Bay, where the median price for a single family home soared above $500,000 last year.

Of course, living and working conditions vary according to the individual. However, one thing all experts agree on is that most migrant workers do not have access to healthcare. According to the NAWS, less than 10 percent of workers have Medicaid.

“Agriculture is one of the most hazardous occupations,” says Mobed. “Migrant workers are at even more danger than regular farmers because they often don’t speak English or have enough protective equipment. If they sustain an injury, they can be out of work for weeks.”

The future of the NAWS remains unclear. It may be moved, suspended indefinitely or revamped to release faster results. In the meantime, the migrant worker remains shrouded in mystery.

“There’s just so many uses for this survey, and it costs such a small amount of money,” says Kelsch. “When you consider what we’re spending on war and everything else, it’s amazing that it was put on hold in the first place.”