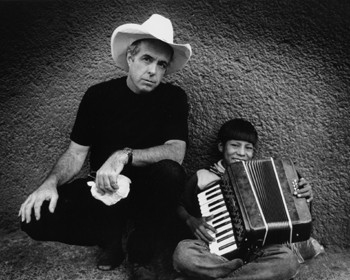 “Hold back the edges of your gowns, ladies,” William Carlos Williams once said of Allen Ginsberg’s epic Beat rant Howl. “We are going through hell.”

It’s the latest in a string of tightly crafted concept albums from a master storyteller. Born and raised not far from Bukowski’s stomping grounds in and around L.A.’s Skid Row, Russell grew up immersed in the lore of the American West and has shown a real knack for penning insightful songs that evoke the broken dreams heard in the best cowboy music. Johnny Cash recorded some of Russell’s songs, as have k.d. lang, Ramblin’ Jack Elliott and a host of others.

Hotwalker, a cinematic collage of music, spoken-word performances and calliope sounds, is an exhilarating excursion through the dark night of Beat culture as told by some of those outsiders themselves. Russell, who used to collect clips of Bukowski’s L.A. underground newspaper column (“Notes from a Dirty Old Man”), later interviewed Bukowski for the European literary journal Beat. Those letters serve as the core of Hotwalker (at one point, plans were being laid for a more lavish tribute album with big-name Hollywood stars conducting the readings) and can be found in Russell’s upcoming book, Tough Company.

The book is unavailable for review, but the CD is rife with dreamy pedal-steel interludes and colorful tales about not only Bukowski, but also folk singer and guitarist extraordinaire Van Ronk (one of the album’s best tracks), environmental writer Edward Abbey (the spiritual father of the Earth First! movement) and others.

One of the real discoveries, though, is the little-known Little Jack Horton, a former circus midget and animal trainer (a so-called hotwalker) now living in retirement in Florida.

“Little Jack Horton was the king of the carnival, the voice of the great American midway, a voice that sounds like Ukulele Ike on laughing gas, the real thing,” Russell intones on the track “Old America.” “He’s been shot out of canons, he did the pass of death on a Shetland pony, he rode the Four Walls of Eternity on a motorcycle. He appeared in movies like The Terror of Tiny Town and One-Eyed Jacks with Marlon Brando. And he wrote poetry. This is a true American voice from the sawdust back lots of the Old World.” And such a voice.

Russell gave Horton a handful of cassettes and a cheap tape recorder, and asked him to read some of Bukowski’s letters and to reminisce about his own experiences with the legendary barfly and Beat poet.

“Real low-fidelity Americana,” Russell says, “the way it used to be.”On the title track, Horton recalls drinking with Bukowski down at the L.A. stockyards. At the time, Bukowski was a postal clerk and Horton an animal wrangler and clown for Ringling Brothers circus. Buoyed by booze and bravado, Horton one night bet Bukowski that he could drive a diesel locomotive, so the pair stole one from the nearby rail yard and took it for a wild joyride before crashing it and bar-hopping their way back to town.

It’s a slice of Americana you won’t see on those sanitized documentaries on PBS.”I guess that I am interested in the changing nature of America,” Russell told me a couple of years ago during an interview for the Bohemian. “I mean, I grew up right after World War II, and America went through a tremendous period of change at that time. Also, I was trained a bit as a sociologist, and of course as a fiction writer I am interested in telling people’s stories. And loss is a very dramatic theme. But I don’t want to bullshit you; I don’t think in terms of the big picture.

“I really am simply drawn to the story of individuals and what they’ve gone through in their life.”

Next up: Hearts on the Line, the DVD release of a film by Eric Temple, that utilizes concert footage of Russell and Andrew Hardin on a songwriter train ride across Canada with Fats Kaplin, Kristi Rose, the Hot Club of Cowtown, Dave Alvin and Eliza Gilkyson. Two more trains are scheduled to ride across Canada this week with Russell, Ramblin’ Jack (a Bolinas resident), cowboy artist Don Edwards, Nanci Griffith, Mary Gauthier, Gretchen Peters and others.

No doubt there’ll be plenty of tales to tell about that excursion.