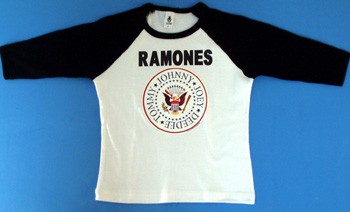 I Wanna Be Sedated: As its teeny-tiny label shows, this punker’s T is intended for the newborn school of rock.

Remember when rock T-shirts meant something?

Mr. Bir Toujour just bought a Joy Division T-shirt. “I didn’t know you like Joy Division,” I said when I saw the new shirt in his drawer.

“I don’t,” he replied, “but I’ve always liked that shirt.” It is a pretty cool shirt, black with a bunch of thin white stripes making this bleak topographic design. “I remember seeing older kids wearing this T-shirt when I was in high school,” he continued. “I saw it on eBay and got it using the money I’ve been making from selling Star Wars figures.”

Don’t panic. He’s not selling good Star Wars figures, only the weird newer ones that came out in conjunction with George Lucas’ mid-’90s re-release of the trilogy. Those new Star Wars toys creep me out. The bafflingly ripped physique of the Luke Skywalker figure makes it look like he’s been throwing back steroids with the Barry Bonds starting lineup figure next door.

But Mr. Bir Toujour wasted many happy hours in his college days roaming big-box stores across the North Bay to find first-edition Boba Fetts. Now he’s selling them so he can get cheap reproductions of vintage T-shirts of bands that he doesn’t even like that much.

Rock-band T-shirts used to seem so special and rare. You couldn’t just stroll into any old Hot Topic and become an instant rocker. If you wanted a T-shirt, you had to see the band. Either that or go to college, as college towns are meccas of both rock shows and head shops full of rock-show T-shirts. In those innocent days, wearing a band T-shirt indicated that you really liked the band. It was almost like wearing a cross around your neck or a wedding ring on your finger: it showed where your allegiances lay. Think of all the metalheads back in high school, and how bands like Metallica kept them outfitted in black T-shirts for life.

The purity of this equation has been somewhat inverted with the mall-ification of youth culture; to wit, you can buy Devo and Barry Manilow T-shirts at Urban Outfitters. Perhaps this is my curmudgeonly nature getting the best of me, but I’m guessing it’s not love of Barry Manilow that draws aspiring hipsters to Urban Outfitters. And it’s probably not love of Journey that drives prices of vintage Journey T-shirts sky high. Since when did the fashion value of a band T-shirt overtake the fan value of a band T-shirt?

I’m quite guilty myself. Not counting my new Joy Division shirt (it was too small for Mr. Bir Toujour), I have eight band T-shirts. The one I wear most often is a heather gray Maserati T-shirt, purchased from the band at a show in San Francisco about two years ago. I must have enjoyed the show, but I can’t think of one time I put on a Maserati CD. I wear the shirt because I like the way it fits.

The only real rock T-shirts I have now are Ramones shirts. I have three, two of which are now too fragile to wear on a regular basis. And the third is the ugliest rock-band T-shirt in the history of the world. It was a gift from this goth-metal dude I worked with at a library in Columbus, Ohio. He was in two bands, one named Martyr Colony and the other Lördbürger. At the time, I was just beginning to come into my punk-rock self, and he took me under his wing, putting X and Buzzcocks CDs in my inbox. One day I came to work and there was this bunched-up wad of white cotton there instead of a CD.

“I was cleaning out my house,” he said, “and I found this old Ramones T-shirt that I used to wear skating.” The design of the shirt came from a time and an age long forgotten. It belongs to the mid-’80s school of fashion, so hideous even Ashlee Simpson has failed to resurrect it. I call it “the first wave of neon.” The shirt employs the oft-neglected color scheme of black, powdery blue-gray and florescent orange. It depicts Johnny in the background and Joey in the foreground, surrounded by a flurry of various fragmented Ramones slogans and symbols hanging askew in the air, accented by random swaths of eye-searing orange streaks.

The Ramones are cool; the shirt is not cool. The shirt makes orthopedic shoes look cool. Not even Joey Ramone’s mother could love the shirt. You cannot look the shirt in the eye. It strikes like a cobra and blinds like the sun.

But I am its keeper. For the safety of the public, these days I primarily wear it as a nightshirt, though I once wore the shirt for two straight weeks on a trip to Wyoming. There is a series of photographs of me standing triumphantly atop assorted breathtaking Rocky Mountain peaks, but the monstrous image of the shirt crudely interrupts the magnificence.

There are times I’ve come dangerously close to getting rid of the shirt. For a moment, I considered trying to sell it online, but the shirt may be one rock-band T-shirt too ugly to bid on—even for a quarter. This somehow renders it priceless. We may have to bronze it.

Meanwhile, Mr. Bir Toujour has been wary of selling more of his Star Wars figures. “Do you think I’ll regret it? I hardly even take them out of the closet.” True. But there are some things you can never get back. I think of the T-shirts I wore in high school—all of which were extra-large, all of them for bands I quit liking long ago—and I want them back. I want the part of me back that wore rock T-shirts because I really meant it. There’s no item fitting that description in any vintage shop or catalog. All that’s left is me and the shirt.