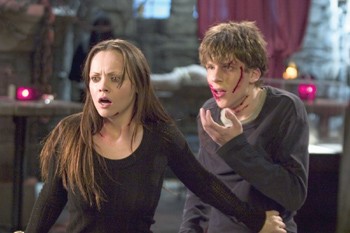 I’d Like to Meet His Tailor: As werewolf movies go, ‘Cursed’ isn’t quite awash enough in the red stuff.

With those words, effectively exclaimed by a freaky carnival palm reader in the opening moments of Cursed, director Wes Craven’s unexpectedly hip new take on the ever-popular werewolf story, it is clear that I picked the right movie to see with Bill Hayes, author of the entertaining science memoir Five Quarts: A Personal and Natural History of Blood (Ballantine; $23.95 cloth). Hayes apparently agrees. As an onscreen gypsy rambles on about blood and death and big scary beasts and how it might be good to avoid the full moon at all costs, Hayes turns with a wicked grin and whispers, “Perfect opening. This is going to be good!”

Cursed isn’t good, exactly, but it’s certainly not bad. Starring Christina Ricci as a reluctant L.A. werewolf attempting to juggle a love life, a Hollywood career and a newfound thirst for human flesh and blood, the tongue-in-cheek horror-comedy is actually kind of a kick. The only problem is that, when all is said and done, it’s not that bloody. Sure, we see drops of blood here and there as people are dispatched by an ever-expanding assortment of careerist lycanthropes. But it says something about Cursed that the big money shot, the one that gets the biggest eeew! from the audience, is of a woman with a bloody nose.

“For a movie that opens with the line ‘I see blood! So much blood!’ it didn’t really deliver on its promise,” Hayes remarks after the film, adding, “I was a little disappointed.”

Bill Hayes is not a blood fetishist, nor does he appear to be a serial killer. But he does know a lot about blood, as he demonstrates in the remarkable and very readable Five Quarts (how much blood the average human body contains). Hayes’ interest in blood stems in part from his lifelong fascination with the unseen mechanics of the human body, and also because his comic-book-loving partner, Steven, whom he talks about in the book, has been HIV-positive for several years.

Hayes writes that since the appearance of AIDS in the early 1980s, our relationship to blood has become more complicated, with blood proving to be both good and potentially dangerous, an unsettling view the ancient gladiators evidently did not share, back when they were guzzling the blood of their vanquished foes.

Hayes likes to share facts like that gladiator thing. He can also tell you that the act of draining every drop of blood from a person is called exsanguination, and knows exactly how long it takes for a single blood cell to complete a full circuit of the circulatory system in the average body at rest (about 30 seconds). Unfortunately, as he was writing the book, Hayes has accumulated so much hematological know-how that he no longer sees bloody movies in the same way.

“When that palm reader was looking at the woman’s hand,” he admits, “I found myself thinking, ‘Now, at any given time, about a quarter of the body’s blood supply is circulating through the skin, so if the average human body has about five quarts of blood circulating through it all the time, then there must be about one and a quarter quarts of blood pumping through that actress’s palm at this very moment.’ That’s the kind of thing that occurs to me all the time now.”

If you think that’s unfortunate, consider this: “I can no longer pick up a five-quart container of ice cream,” Hayes confesses, “without thinking, ‘Five quarts. If I were exsanguinated for any reason, you could fit all my blood in this plastic tub.”

Asked why people have such strong reactions to movies like Psycho and Carrie–which Hayes ranks along with Blade as three of the best blood-themed movies of all time–he replies, “People have probably always had a visceral reaction to the sight of blood, even when it’s very obviously fake blood. In the theater, even before Shakespeare, blood has always been an effective shock device.”

Cursed is an example of that, demonstrating that you can shock an audience as easily with a few drops of blood as you can with whole buckets of it. It all goes back to our basic human responses–that alternate fascination and revulsion which so many of us feel at the sight of blood.

“I think horror movies and vampire movies and werewolf movies–including the one we just saw–tap into that love-hate relationship we all have with blood,” Hayes muses. “In Cursed, as in the real world, blood represents life, to humans and werewolves. I have no problem with that.”

With a laugh, he adds, “I just wish there’d been more of it.”