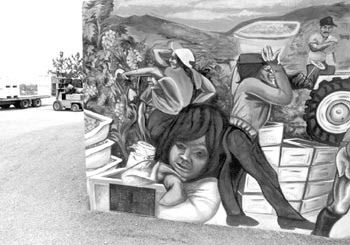 The art of living: A mural near the tank farm at the Gundlach-Bundshu Winery in Sonoma honors the labor of Mexican farmworkers, and helps maintain a sense of culture and self.

The high cost of becoming a gringo

Maybe we need to put a sign at the border: Warning–America May be Dangerous to Your Health. It has never been easy to be an immigrant. Imagine those 19th-century immigrants, leaving certainty behind, abandoning Ireland and Italy and Russia, to travel to America. What bravery, what recklessness the journey to Ellis Island required. And what a price there was to pay for leaving certain poverty.

A new study, headed by Professor William Vega of UC Berkeley, has found that Mexican immigrants suffer increased mental stress the longer they stay in this country. Rates of mental illness and social disorders, like drug use and divorce, rise after immigration. Within a generation, Vega’s researchers saw the breakdown of immigrant families, on a scale comparable to that of other Americans.

These findings are, at least, ironic. For generations, Americans have assumed moral superiority toward Latin America–for example, citizens of San Diego once traveled south into Tijuana whenever they wanted to sin. Today, Americans like to imagine Mexican drug lords contaminating our “innocent” youth.

Immigrants. I see them all the time in California, their eyes filled with terror and wonder. Their jogging shoes have transported them from villages in Mexico or Central America into the postmodern city of freeways and peroxide and neon. How will they find their way?

Vega and his team of researchers studied the problems of Mexican immigrants in Fresno County, but would, I suspect, have come up with similar findings had they talked with young Mexicans in Tijuana. The poor are in movement, all over the world, from village to city, from tradition toward change.

Recently, in the boomtown of Monterrey, Mexico, I met teenagers, poor alongside rich, busy consuming drugs. Cocaine was evidence of their modernity, a habit that made them just like the Americans on TV and the movies.

Monterrey has not yet turned as violent as Mexico City, but the women in the new factories, on the outskirts of town, know divorce.

All over the world, from Andean villages to Southeast Asia, America advertises the “I.” You can drink America from a Coke bottle; you can dance America. America is seducing the young all over the world with the idea of individual freedom. Change. Movement. Dollars.

Between Tijuana and San Diego tonight, you can meet kids waiting for dark to run into the United States. They say they do not want to become Americans. They do not speak of Thomas Jefferson or the Bill of Rights. There is, they say, a job waiting for them in Glendale or Fresno. A job in a pizza parlor or a job as a roofer that will keep them and their families from going hungry.

The U.S. professors fret. The panelists for the National Research Council advise against attempts “to push immigrant youth toward assimilation.” But they might as well bemoan the jet engine or the bicycle.

Movement. America is not an easy country for the native-born or the immigrant. Everything keeps changing. In small towns in Arkansas, Mexican immigrants pluck dead chickens because no one else will do it. They paint their houses gaudy colors, speak Spanish at the post office. Native-born Americans bemoan the change. They become foreigners in their own town.

The kid from Oaxaca ends up making pizzas in Santa Monica. He learns English by hearing “Hold the pepperoni!” Day after day, he breathes America. America goes into his ears–California slang, the thump of rap. There is no resisting it.

Assimilation is more a biological process than a matter of choice. When you approach the counter at McDonald’s, you buy more than a burger–you buy an American spirit of impatience. Immigrants end up walking like the native-born, assuming the same nervous slouch.

Drugs. Divorce. Anonymity. The religions of the world that are growing are those that address the sadness of the migrating poor and their longing for the lost village.

Immigrants chose to leave Mexico, so they imagine their American-born kids can choose to absent themselves from Los Angeles, “remain” Mexican despite the heaving and throbbing city around them. Papa grumbles that the kids are becoming disrespectful U.S. teenagers. Mama says everyone was happier–poorer, yes, but happier–in the Mexican village.

America is a most remarkable country, the model of modernity. It offers people all over the world the possibility of individual life–the freeway on-ramp, the separate bedroom, the terrible loneliness, the range of choices on a TV remote.

The Mexican kid from Oaxaca will not go back. His dollars and maybe something more he cannot describe will keep him making pizzas in Santa Monica. Yes, he will regret the disrespect of his American children. Perhaps he will even send them back to Mexico, during–that most American of seasons–adolescence.

But the village of Mexico is not what it used to be. There are blond soap operas blaring from the television in the kitchen. And everyone in the village talks of jobs in Dallas and Guadalajara.

The guilt. The terrible guilt of becoming an American remains. Every child of immigrant parents knows it. It is as old as America. The scorn of a grandmother–her black dress and her face at the window. Her mutterings in Yiddish or Chinese or Swedish. You are turning into a gringo, a goy, a stranger to her.

Dear Nana. Forgive us! Forgive us our love of America, this very strange country, the envy of the world. Look! Look at the fresh fruits at Ralph’s Market. The meats and the cheeses, dear abuelita. Forgive us for taking the 18th-century pronoun, the “I,” all the way to Fresno. It has driven us mad. But it has gotten us a washer and dryer.