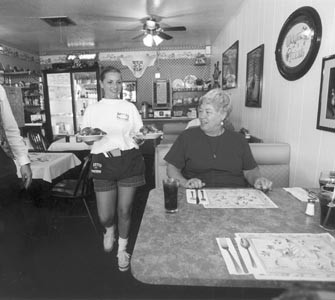 Down the chippy: Betty’s Fish & Chips is a local favorite.

GROWING UP in London may have warped my culinary preferences forever. For years, I thrived on chocolate digestive biscuits for breakfast, shepherd’s pie and mushy peas for lunch, Marks & Spencer double cream-filled Victoria sponge cake for tea, and fish and chips for supper.

Fish and Chip Night usually occurred on those none-too-rare evenings when my mother was at a loss over what to prepare for yet another dinner for a family of six, and she recoiled at the thought of my father taking over the kitchen to experiment with one of his strange Maltese dishes. Hell, last time he mistook ginger roots for the beloved Jerusalem artichokes of his youth, boiled them up, and, well, the flat hasn’t smelled the same since.

Mum, a staunchly proud Yorkshire lass at heart, would resort to her childhood comfort food. Inevitably, it was always found “down the chippy.”

At that time, the absolute best fish and chips in town were at the Seashell Fish Restaurant and Takeaway on Lisson Grove in London, opposite the social security office. The queue of salivating customers with empty shopping bags would begin to snake out the Seashell’s door and down the road even before the first pale-coated fish fillet hit the ferociously bubbling oil.

Back at our pad, battered fish aromas would eventually seep upstairs heralding my mother’s arrival, and she would return with her loot. She would deposit hefty, piping hot, newspaper-wrapped parcels of fried food on the kitchen counter while we scurried about grabbing plates and malt vinegar. We’d sink our teeth into tender, flaky cod, plaice, or haddock enveloped in ultra-crisp golden-brown batter, and into industrial-size chips, all doused with lashings of tangy malt vinegar and sprinkled liberally with salt. The biggest chips were saved, crammed between slabs of bread as thick as fists (doorstops, we called them), and a thick layer of butter to create wonderful chip butties that sank in the stomach like lead boots.

Ah, those were the days, my friend.

Betty’s Fish & Chips in Santa Rosa attempts to re-create the feeling of the local corner chippy, with a touch of an olde world tea shoppe thrown in. The cheery, bustling eatery and take-out is decorated with British souvenirs, such as a tea towel depicting Scottish castles and a poster of the Houses of Parliament. The tables and small cozy booths are set plainly with a little glass bottle of malt vinegar, a miniature container of Heinz tomato ketchup, salt, pepper, and a vase of fake flowers.

We wet our whistles with a bottle of Sharps non-alcoholic beer ($1.95) as we perused the menu. Betty’s has a good selection of draught and bottled beers (including Pale Ale and Watneys) and a tiny wine selection. But we ultimately decided to follow wine guru Hugh Johnson’s advice and pair our fish and chip dinner with a nice cup of tea. The tea ($1.25), served with milk (of course!), was Lipton’s and arrived in whimsical individual china teapots that sit atop matching cups. The cuppa tasted good, though not as strong and reviving as the typical Brit brews.

We began with onion rings ($3.95), which were good–hot and crunchy with a not-too-oily batter, and sweet-flavored onions. But the breaded french-fried mushrooms ($3.95) made a poor impression. The breaded exterior was too thick and the mushrooms inside soggy and overcooked. The accompanying sprinkling of Parmesan cheese and ranch dressing did nothing to save this dish.

Fish and chip meals range from $3.99 for small (one piece of fish) to $11.95 for jumbo (four pieces). Betty’s uses Icelandic cod exclusively, which has a very mild flavor and pleasant flaky texture. The batter is crisp, golden brown, and not too thick. But the chips are more like regular American fries (not shoestring, but not the thick, irregular-cut starch-laden gems I remember). Still, the chips are served hot, golden, and crispy, so we can’t complain too much.

Desserts are all housemade and feature some great, fresh-baked, oversized individual pies that might just have been pulled out of grandma’s ancient oven. Betty’s may not be quite the same kettle of fish as the Seashell, but it’s a good, cheerful place to satisfy your craving for Brit fare “down the chippy.”