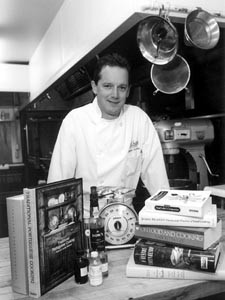 HE NAMED his restaurant after his mother, but when Manuel Azevedo is pressed to name a specific food memory, his father’s fall-back favorite comes to mind. “This summer we had smelt, and I was trying to think of what would be a good use for them,” recalls Azevedo, the chef/owner of LaSalette in Sonoma. “Ding! I remembered my dad always used to do this dish. It’s almost something you forget because he ate it all the time. But it makes perfect sense. You lay out the nice black-eyed peas and put the freshly sautéed fish over them, a little drizzle of olive oil and handmade vinegar, and you slice up an onion really thin. It all clicked together, and it was a beautiful dish.”

He pauses and thinks. “But there’s a lot I go back to that my mom did,” he adds dutifully.

If Azevedo has a hard time picking out a single moment of culinary influence, it’s only because he’s been steeping in it from birth. Born in the Azores, Azevedo and family came to Sonoma from Portugal when he was 2 years old. His parents still live nearby and drop in regularly to keep an eye on what their son is doing with the Old World recipes. His mom even teases him by bringing over dishes that Azevedo hasn’t been able to figure out yet. “She kind of likes the fact that I’m some big-time chef, or trying to be, and she’s still got some little secrets,” he says.

But the soft-spoken 32-year-old brings to his restaurant work some traits that are peculiarly American, peculiarly his own.

That whole self-made-man thing, for example. After his first few jobs in restaurants (his very first, in fact, was a barbecue place that was once housed in the compact little building that is now LaSalette), Azevedo broke out into a series of typical early-20s jobs that culminated in his own auto detailing business.

But then, at age 27, Azevedo was given what he calls the “get-a-grip speech” by his fiancée, and he decided he’d rather spend his life cooking than doing anything else. His return to the restaurant biz was anything but triumphant: He had to start all over as a bus boy at the Kenwood Restaurant. Over the course of five years, he worked his way up to sous-chef, all while holding second jobs in catering. And studying. On his own.

Azevedo accumulated a library of cookbooks, and ate out as often as possible to get a sense of presentation and flavor from the other side of the stove. Four years into his autodidactic adventure, Azevedo almost purchased his own place. But the deal fell through, for which he has been appreciative ever since. “Having an extra year to put everything together made all the difference in the world,” he explains.

Azevedo’s travels added the final finish to his restaurant’s concept. He’s been all over the world, with most of his destinations either in Portugal proper or in one of its former colonies, not looking for specific ingredients, but for a feeling: What motivates the creators of dishes from certain regions? What are those people like?

“I’m looking to get the subconscious experience of dining and bringing it here,” he adds.

BY WAY of illustration, Azevedo points at two polar opposites on his menu: stuffed squid and cataplana. Stuffed squid, he says, is a typical dish from the Portuguese capitol, Lisbon; therefore it gets the sophisticated treatment: delicate garnish, small portions, china plate. Cataplana, on the other hand, is from a coastal region of southern Portugal, and feels much more relaxed in presentation. The fragrant tomato, meat, and mussel stew gets served to the table in its pan, with some slices of bread stuck on the side to soak in the juices. “It reminds people that this is peasant food, it’s just something thrown together in a pot,” he explains, “You let it cook and you put bread in it and you eat it. …

“Even the name ca-ta-plan-a“–Azevedo’s voice shifts momentarily into explosive, liquid Portuguese–“sounds like fun.”

Fun, yes. Frivolous, no. Azevedo has put a lot of research into his food. His readings are what led him to include more than continental food on the menu. “I wanted to incorporate former colonies into it, because it reminds people that Portuguese food is not just what you see in Portugal. Sometimes you have to search for it a little, because through time some of it’s been lost.

“But if you understand the depth of Portuguese history, then it ties in perfectly.”

AZEVEDO’S historical approach to food fits right in with his close cultural ties, and he has no qualms about claiming the cataplana, a more rustic dish, as representative of his heritage. “Definitely my family is more cataplana,” he says. “A good analogy might be, my wife’s from North Dakota–I don’t know if you want to mention this, it might get a lot of North Dakotans pissed off–well, the islands are like that. We’re considered the boonies, which we are, we’re out in the middle of nowhere, for crying out loud. So we’re very limited in a lot of things, technology, ingredients for food,” Azevedo says.

“The cuisine I grew up with was very simple, even simpler than anything you’d find on the mainland. So I grew up with that meat-and-potatoes kind of eating, everything in a big pot. I don’t think I’d have had a successful restaurant doing just the meat and potatoes, though. It would be like opening a North Dakota restaurant.”