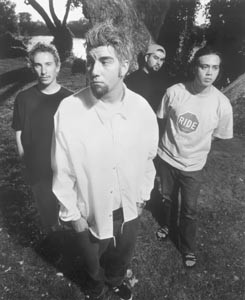 The Deftones do it their way

THE DEFTONES spent two years touring behind their 1995 debut CD, Adrenaline, and received virtually no airplay from mainstream radio or MTV. Meanwhile, groups like Marilyn Manson and White Zombie, who both play a heavy style of rock that’s not that far removed from the Deftones’ dense sound, burned up the charts behind heavy airplay.

But instead of being bitter over the airplay snub, Deftones’ singer Chino Moreno thinks it might have been a blessing for his band. “I think it’s good. I’m pretty proud of that, to know we’ve done it on our own,” Moreno says, noting that Adrenaline sold about 250,000 copies.

“Sometimes it’s kind of frustrating to think we don’t get a lot of radio play and video play and stuff. But I mean we don’t really have a gimmick. We don’t have anything other than what our music is.

“I mean, it kind of speaks for itself.”

The Deftones’ second CD, Around the Fur, hasn’t made the band radio or MTV darlings, but it has helped solidify and increase the group’s audience. The new disc represents a solid step forward. Their sound remains intense, with plenty of serrated guitar chords, pounding beats, and thick bass lines. But the new CD hits harder melodically and offers a wider range of moods that shift powerfully from an eerie quiet to a roaring gale.

Moreno feels one big difference between the two records is immediacy. The four members of the Deftones have been friends and bandmates since they were high school students in Sacramento, about 10 years ago. Adrenaline featured material that had been written throughout the Deftones’ formative years as a band.

Exactly what events and feelings inspired the new songs is a subject Moreno addresses only in generalities. “A lot of things have changed over the last two years since I started touring,” Moreno says. “Yeah, a lot of stuff went down, and it’s hard. You’ve got to think about that when you’re on tour, like if your mate at home is all tripped out about you being gone, you have that stress. But you also have all your band stress, your everyday things going on.

“So you’re sort of hit from both sides on things. I mean, it’s not the best thing to do, but what I ended up doing was just staying drunk the whole damn tour. It’s not good. It affects your life, like hardcore. These last few years, I’ve changed a lot for the worse, I think, a lot of the time just from stress. But I think I’m lucky that I’m at least able to write about it and talk about it in songs, get it all out.

“On this record, instead of attacking all the time or being pissed off, I kind of put myself in more of a vulnerable position,” Moreno adds. “This time I’m receiving a lot more of the anger.”