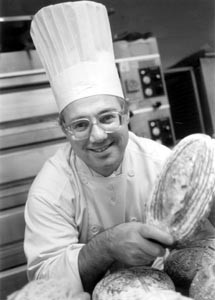 Rollin’ in the Dough

THE BAKING classroom at the California Culinary Academy in San Francisco is a prosaic affair, crammed as it is with squadrons of industrial appliances hung with 1970s-issue health department propaganda and a dog-eared flyer for a Fleischman’s yeast factory tour.

But when Peter Reinhart begins the demonstration, the room hums with more than refrigerators. Students at the back of the room squint intently into the dented stainless-steel mirror hanging at an angle over the head table, while the lucky front-row dwellers rumple their uniform whites to lean over the countertop and get a closer look. The laserlike focus of the small crowd only seems to energize Reinhart, who rose to fame as bakery owner Brother Peter. Flour and polenta fly over the counter, which might explain why the teacher’s traditional black-and-white checked pants are more of a floury gray in the six inches between the hem of his apron and the floor.

This week, the class is working with a versatile rustic dough that responds perfectly to Reinhart’s trademark long, slow rise. He coddles the floppy dough gently into the short rounded bone shape of a ciabatta, knuckles it ruthlessly into a pizzetta, and drapes it out into a two-foot-long baguette. “When the bread spreads out, it is exposed more to the heat, which drives the moisture out quickly,” says Reinhart. “The roasting of protein and glutens gelatinizes the starches for more intense flavor.” And verily, when the breads emerge from the oven, held gingerly by a serious-faced older woman nearest the bank of 6-foot-wide ovens, they are buttery brown, firm of crust, big of hole, nutty of aroma.

After the class has disposed of the examples, jostling and joking for a drippy piece of pizza, they disperse to their bowls and mixers for individual projects, while Reinhart takes a break at the student cafe, a slightly dusty assemblage of tables and soda dispensers in a balcony overlooking the cavernously elegant dining room of the CCA. The chandeliers seem far from the cafe-casual world Reinhart left behind three years ago when he and wife Susan sold their prize-winning Brother Juniper’s Bakery.

But the affable breadmaker is straddling the juncture of two worlds with even more enthusiasm than ever.

“One of the challenging things for me in this environment is to deliver a very specific curriculum that’s anchored in facts and techniques and at the same time go deep enough with it so that it touches into a level of spirituality that’s subtle and subjective rather than overt,” Reinhart muses, giving an owl-eyed grin. “I call it a back-door philosophy in spirituality.”

REINHART’S approach has always been back-door, as in up the back-porch steps and into the kitchen. The religious community he belongs to, Christ the Savior Brotherhood, urges spirituality through service, and Reinhart’s particular set of skills has led him invariably to serve at the oven, from his stint at a vegetarian cafe to the years at Brother Juniper’s Cafe and Bakery, a venerable Forestville institution that was later memorialized in Reinhart’s second book, Sacramental Magic in a Small Town Cafe (Fairmont, 1994).

But these days Reinhart is using the “front door” more, in a new career-development practice and as a recipe consultant with local food firms. His just-released Crust and Crumb: Master Formulas for Serious Bread Bakers (Ten Speed Press) was originally intended as an anthology of bakers, but ended up focusing specifically on Reinhart’s work, at the publisher’s request. And, of course, there’s the academy, where the unassuming Brother Peter–that’s just plain Peter to civilians–dons a crisp paper hat and a respectful moniker: Chef Peter.

In true spiritual fashion, Reinhart can find cause for rejoicing even in the pressures of increasing expertdom. “I’m forced to learn new things all the time, because people are coming to me for the answers, which is great,” says Reinhart. “It pulls stuff out of me that I might not go after otherwise.

“The one thing about bread that I’ve learned is that it’s almost fathomless how much there is,” he continues. “I’m still finding all sorts of new information, and conflicting ideas and new discoveries.”

Rather than being frustrated by this mystical substance that has defied some of the best minds of food science to explain why it sometimes doesn’t work, Reinhart prefers to explore the path from life, death, and transformation that bread travels. “It’s like a maze,” Reinhart says meditatively. “You get into it deeper and you realize that there’s only one way to get out and that’s to go forward.”

His classes are an important outlet for that creative drive. “We’re always exploring parameters,” he says. “One of the things that keeps it interesting for me, and I think makes it especially interesting for the students, is to push the envelope and see how far we can go.”

Home bakers can be just as devoted to this pursuit as full-time culinary students, says Reinhart, pointing to the participants in his sell-out courses at Santa Rosa Junior College. “The people who come … are into it in a really deep way; they want to know all the secrets.”

THOSE SECRETS to baking good bread are few but crucial: time, temperature, and patience, not only in waiting for the dough’s natural fermentation to dictate when it needs more water or is ready for the oven, but also in learning about bread. “Baking good bread has a lot more to do with feel than it does with the recipe,” Reinhart says firmly. “As you do it more, you start to develop a feel for when dough is just right and when it’s time to take it to the next stage.

“As you develop that sensitivity, everything else pretty much falls into place.”

So it seems all this talk takes a back seat to the satiny feel of a well-kneaded dough or the toasty mouthful of good crust. “When you start out, you think that your words are so effective that they somehow get it through,” says Reinhart, leaning forward slightly to be heard over the bustle of students. “Now I’m finding out that the most effective thing I have is a loaf of bread. I touch people more with the bread itself. I can communicate more through the medium and metaphor of bread than I ever could through just straight principles and philosophy.”

Peter Reinhart’s Nov. 14 class at SRJC, Building a Bread: An Intensive for Serious Bakers, is already full, but you can get on the waiting list for cancellations by calling 527-4371. Another class is planned for the spring, so look for the catalog at the end of November.

From the October 29-November 4, 1998 issue of the Sonoma County Independent.