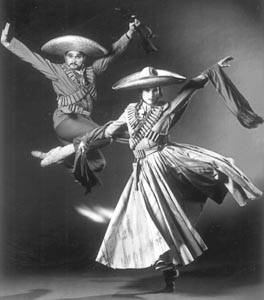 HERE ARE a few scenes from the front lines of dance: A lithe young woman conducts a sizzling solo performance of passion with a chair. A half-dozen agile bodies roll with astonishing, gravity-defying grace over one another, from floor to bench and back again. A costumed couple juggles sombreros, guns, and bandoleers full of bullets as they fly with casual grace above the stage.

Face facts: This is not your father’s ballet. Bored by old conventions, dance has changed, adapted, mutated. Some would say that companies such as Smuin Ballet/SF and the Alvin Ailey Repertory Ensemble, the two dynamic dance troupes about to roll into Sonoma County this month, have more in common with a music video than The Nutcracker. But this is not, as some critics have called it, dance for the MTV generation.

“I don’t think that’s very accurate,” says Michael Smuin, founder and director of Smuin Ballet. “I think MTV is for people who can’t concentrate on any one image for long. That’s why there’s all that fast cutting and fades and trickery.”

But then the head of the small but wildly popular five-year-old San Francisco dance troupe relents a bit.

“I guess what they may mean is that my work is accessible to a lot of people,” Smuin says. “That it’s not just tutus and swans and fairy-tale people, that a lot of the work is based on what’s real. And then there’s the music that I use: I use everything from Willie Nelson to Bach. So there’s a variety.”

Smuin’s colorful career has certainly prepared him for eclectic creativity. Of course, he has all the standard credentials in classical ballet, including over 10 years as director of the San Francisco Ballet. But he’s also worked as a choreographer on everything from ice shows to circus acts to Hollywood movies (including The Return of the Jedi) to shows on Broadway, where he won a Tony Award for his work on Cole Porter’s Anything Goes.

“I’ve done it all,” Smuin says with a laugh. “It wasn’t necessarily a matter of choice; it was a matter of survival, of working. You went where the work was, and that was good, because it was really an education.”

Smuin’s latest creation will soon hit the stage at Spreckels Performing Arts Center, just a few weeks after the work’s premiere in San Francisco. Sueños Latinos was inspired by music written by composer Aaron Copland during his travels through Mexico and Cuba. Smuin describes the new 30-minute dance production as a Cubist mosaic of sounds and images.

“It’s a collage of bulls and charros and sombreros and Day of the Dead and all those kinds of things put together,” Smuin says. “And the only form really is the form of the music. It’s quite exciting and very dreamlike.”

Both Sueños Latinos and the sexy Carmina Burana, the other work Smuin Ballet will offer in Sonoma County, are dramatically non-traditional. That, according to Smuin, is the key to keeping audience entertained in an age dominated by Hollywood blockbusters.

CAPTURING an audience through innovation takes on added importance in these days of declining public funding for the arts. That’s a lesson that the Alvin Ailey American Dance Theater has learned the hard way.

The venerable dance institution, founded in 1958 by the African American dancer Alvin Ailey, has faced deep cuts in its funds from the National Endowment for the Arts in recent years. But ticket sales have pulled the company through that financial crisis, and one look at their dynamic performances goes a long way toward explaining their box office popularity. It should be no surprise that pop star Madonna once studied with the Alvin Ailey dance troupe: The company aims for accessibility, trying to bring in folks who might otherwise be going to rock concerts.

That smooth accessibility holds especially true for the work of the Alvin Ailey Repertory Ensemble. The young dancers of Alvin Ailey’s second company perform to music ranging from classical to jazz, and their passionate moves and high-energy choreography are anything but traditional.

But will all the revolutionary innovation in the world be enough to make dance converts out of the young audiences of the future? And how can artists keep dance fresh and hip without becoming just a live-action version of a music video? These are challenges that the dance world is struggling to meet, according to Smuin.

“I think there’s not that much new work being done that’s significant, and the ballet boom is definitely over,” he says. “So you really have to come up with interesting, demanding, entertaining work to capture an audience and keep them.”

‘As Bees in Honey Drown’