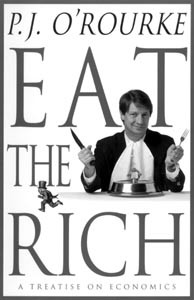 IT’S A STRANGE PLANET. The global marketplace is in flames (remember when we were all supposed to be in awe of Japan’s supposed economic genius?), yet some investment analysts assure us that all is well, leaving ill-informed Americans to piss away their savings on $2,000 Beanie Babies. Go figure.

It makes ya wanna holler.

In recent years, political satirist P. J. O’Rourke–author of such irreverent best-sellers as Holidays in Hell and Parliament of Whores, and a foreign correspondent for Rolling Stone–had been scratching his head over the baffling state of the world’s varied economies. He persuaded his magazine editors to send him out into the world to research some of the globe’s odder political-economic systems (like the nationwide pyramid schemes that toppled the Albanian economy a couple of years ago).

The result is Eat the Rich: A Treatise on Economics (Atlantic Monthly Press; $24), which features on the cover a smugly mugging O’Rourke, knife and fork in hand, about to skewer an elegantly covered meal.

Take it as the first clue that this is going to be a hatchet job.

Granted, this is political satire, right? So we shouldn’t set our sights too high, despite a tongue-in-cheek chapter (“From Beatnik to Business Major”) that includes a somewhat serious explanation of Keynesian theory and supply-side economics that any corner drug dealer can understand.

Also, bear in mind that O’Rourke himself is the strangest of all animals–a moderate Republican with a sense of humor, albeit one with a frat-boy-gone-bad past, employed at one of the world’s hippest rock magazines. That is to say that while he can be deliciously wicked and even downright funny–at least when he’s not being cloyingly cute or self-referential–O’Rourke harbors a fair amount of contempt for foreigners and the poor. And that starts to grate on you after a while.

Back to the treatise. O’Rourke juxtaposes a series of chapters that contrast good and bad economies. The book kicks off with a description of Wall Street as good capitalism–not an exploration of the leveraged buyouts and junk bonds that have cost taxpayers billions, but a guide to the funny polyester jackets that traders wear on the floor of New York Stock Exchange. That’s followed by a chapter that holds up–or places a foot on the neck of–Albania, a former backwater East European socialist state, as an example of bad capitalism. Sweden: Good socialism. Cuba: Bad socialism. And so on.

Unfortunately, there are too many anecdotes about lazy locals and odd customs, and too few economic insights here. For example, as O’Rourke points out, Swedes spend an excessive share of their income for social services. Of course, most Americans get taxed heavily, some live in urban slums that make the Third World look enviable, and none of us get much in return, though apparently the author doesn’t want to dash our image of America as the ultimate example of “good capitalism.”

Suffice to say that O’Rourke is no Michael Moore.

Meanwhile, in O’Rourke’s eyes, Cuba is tantamount to one of those roadside yard sales that leaves you wondering how anyone can have the nerve to display their worst junk in public (though he does relate a roadside rescue experience that shows just how charming the Cuban people can be). And the Russians, well, they’re just a surly bunch.

Strangely, after all this eccentric geo-econo-political musing, O’Rourke gets preachy. He concludes that if we want to make it in the world, we need to put our noses to the grindstone (there’s that creeping Republicanism showing its face) and work harder, respect property rights, and push democratic values. He even concludes that a little economic privation never hurt anyone–heck, the Great Depression even taught America a few lessons about Keynesian theory, he says.

Of course, that glib statement fails to take into account the abject poverty and suffering that swept both urban and rural communities.

O’Rourke’s conclusion: “Everybody in the world could be rich as hell.” Uh huh, if we all had fat book contracts.

From the October 29-November 4, 1998 issue of the Sonoma County Independent.