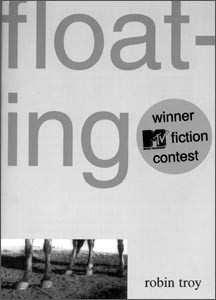 IT SOUNDS LIKE a Zen riddle: If MTV gave out awards to novels, what kind of novels would win those awards? That clears the mind in a hurry, doesn’t it? But shake off that meditative trance, because that’s not the new Backstreet Boys album in your hands–it’s an honest-to-god book with the MTV seal of approval.

As a physical object, Floating seems designed to provoke the same reaction as a stuffed animal (or a Backstreet Boy). The book is little, it’s funky-looking, but most of all, it’s terribly cute. The chapters are all roughly 10 pages long (just about right for perusal during a lengthy commercial interruption), and the chapter numbers are set in huge type, which means the reader can see the next break coming from several pages away. Enormous design effort has gone into making this book the literary equivalent of a music video, full of quick cuts and perspective changes.

So the author already faces an uphill battle to convince the reader that her novel provides a more meaningful experience than, say, going down to the mall to see Spice World II: Girl Power Goes Global. The big surprise is that, buried beneath this slickness, Troy’s work initially offers a rough little gem of a story.

Twenty-something Ruby Pearson is a giant of woman stuck in a desert pit stop of a town–Whitticker, Ariz., population 641. She married her cowboy high-school sweetheart, Carl, because she thought he was her fast ticket to the wider world. But their love and Carl’s ambition have both withered under the shadow of Ruby’s high-watt charisma and powerful personality.

Driven to drunken rage by his growing feelings of inadequacy, Carl picks up an empty pistol, robs a convenience store, and then speeds out of Ruby’s life into the waiting arms of the police. Once in jail, Carl is bothered less by the separation from his wife or their 8-year-old son than by the fact that Ruby will at last get her hands on the one thing that he’s always been able to call his own–his beloved horse. So he uses his one phone call to contact his estranged brother, Sean, and invite him to take the animal. For reasons of his own, Sean makes the trip to Whitticker and encounters Ruby. Romantic complications ensue.

It might have made an interesting tale. Unfortunately, it’s also one that the author (who grew up in Connecticut and graduated from Harvard) doesn’t seem qualified to tell. Write what you know, runs the old maxim. But whatever Troy knows, it doesn’t seem to be rodeo cowboys and small towns in Arizona. Whitticker comes off like a B-Western stage set, and the ruggedly handsome Sean seems cobbled together from every Marlboro Man cliché ever minted. The book’s priceless description of him as “six foot five, with broad shoulders and skin golden as the desert sand at sunset” takes us deftly into the territory of the kind of romance novel that features Fabio on the cover.

Even less convincing is the author’s portrayal of Ruby’s young son: “I think you’re the oldest eight-year-old I’ve ever met,” Sean tells Brian. The reader is compelled to agree, since Brian often seems more like 45 as he is forced to take on the heavy narrative burden of describing his parent’s tumultuous relationship.

The book does a bit better with Ruby and her troubled husband, who are easily the most human characters in this eerily artificial novel. But that’s not enough to save Floating. In the end, the book’s cutesy layout seems perfectly matched to its ephemeral literary impact. If this is the future of fiction, just bring on the music videos.