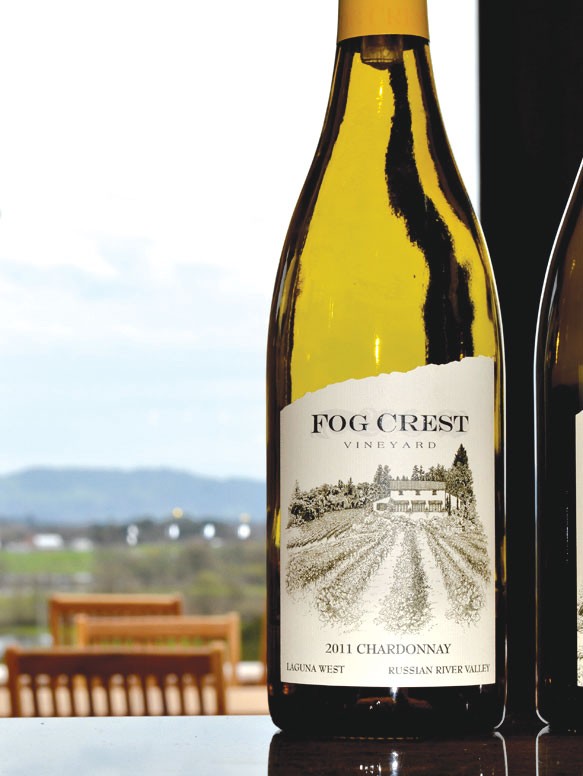 The view is clear and crisp from Fog Crest Vineyard

I’d been told there’s a new winery somewhere on Occidental Road, and to look for the sandwich board. That’s all I know about Fog Crest Vineyard when I walk in, just in time to see a group of folks— “My first group!” tasting room manager Paula Minnis says—gathered under patio umbrellas, raising their glasses in a picture-perfect toast with a view of the Laguna de Santa Rosa and Sonoma Mountain completing the scene.

Staying largely behind the scenes, Fog Crest owners James and Rosalind Manoogian grant the spotlight to their new winemaker, Jérôme Chéry, who was schooled in the grape-juice way at the University of Burgundy in Dijon. Previous vintages were made by Daniel Moore and consultant David Ramey, whom Manoogian contacted specifically for his reputation for crafting a luxurious style of restaurant-wine-list-friendly Chardonnay.

Instead of pushing a silly origin story about how their tradition of winemaking began with some grandfather from the old country stomping grapes in his basement—it’s likely that said grandfather had more gainful business to attend to—the Manoogians simply explain that after James Manoogian ran a South of Market restaurant called Limbo around 1989, they headed up here and planted grapes in 1998. Both are involved in the day-to-day business. The smartly outfitted little crushpad and winery was built in 2008, while the Mediterranean-style tasting room was put on hold for better times, and completed in time for the 2014 opening.

A flick of a switch warms the room with a gas-fired hearth, designed by Bohemian Stoneworks. For now, the place smells like brand-new furnishings, but even that doesn’t overpower the 2011 Estate Chardonnay’s ($39) heady buttered-popcorn aroma. But there’s more going on with this wine: a hint of greens wrapped in caramel-apple cotton candy, with gentle acidity at the center and a savor of olive pit on the finish. Showy, but not shallow.

“First Friday” wine and cheese evenings start April 4. The site is blink-and-you-miss-it on Occidental Road; look for the sandwich board.