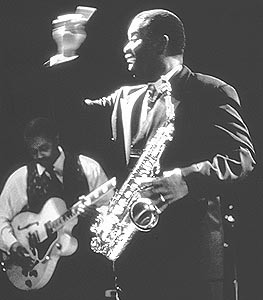 ASK MACEO PARKER to characterize his musical style and the celebrated saxophonist gets reflective. “Funky–lots of syncopated chops, stabs, stops, and jerks,” he explains, during a phone interview from his hometown of Kingston, N.C. “Sometimes I try to stop and start where people least expect it. It’s almost like a running back trying to dodge guys trying to stop him from gaining yards. You know, how a running back does the shake ‘n’ bake–dodging left and right?

“It’s the same kind of thing.”

For three decades, James Brown, the Godfather of Soul, beckoned Parker to “blow, Maceo, blow.” And Parker, now 55, responded with in-the-pocket tenor and baritone sax solos that helped signify such classic James Brown tracks as “Papa’s Got a Brand-New Bag” and “Cold Sweat.” If just for his soulful work with Brown, Rolling Stone once opined, Parker’s place in history would be secure. But in 1990, Parker launched a solo recording career with the organ-soaked jazz and soul standards on All the King’s Men (4th & Broadway), followed by a pair of acclaimed instrumental jazz CDs, 1990’s Roots: Revisited and 1991’s Mo’ Roots, both on the Verve label and both hitting the top of the jazz charts. Those hits rekindled his career and made him a highly sought-after session player who contributed to tracks by Deee-Lite, Living Colour, Jane’s Addiction, De La Soul, and others.

Six months ago, he released Funk Overload (WAR), his first solo recording in two years and a tribute to ’60s and ’70s soul legends (Brown isn’t among them). The dead-heavy funk CD is a marked departure from his earlier jazz recordings. “I wanted to do something a little different,” he explains, noting that the new project provided a chance to record with his rapper son, Corey, who contributes several vocals.

“It’s another source of energy and gives me a bit more longevity to have my son with me,” he adds. “It feels good.”

Fresh from a Midwest run with the Dave Matthews Band and an appearance on Late Night with David Letterman, Parker performs Feb. 13 at the Phoenix Theatre in Petaluma.

PARKER’S PERFORMING career started in elementary school when he formed the Junior Blue Notes. “I’ve pretty much been Maceo since I was born,” he says with a laugh. “It came easily for me–it was something I could do in my sleep–and once I recognized that I could do what I do, I just decided to stay with it.”

But his serious flirtation with fame began at age 21, when in 1964 he and his drummer brother Melvin joined the James Brown band, then on the verge of becoming an R&B hit machine.

It was a heady experience.

“It was really something to start out working on something of that magnitude,” Parker enthuses, ” traveling not only all over this country but also Europe, Asia, and Africa.

“It was top of the line–you couldn’t get no higher.”

The move started Parker’s longtime association with saxophonist Pee Wee Ellis (who later joined the Van Morrison band) and his lifelong friendship with trombonist Fred Wesley, who still records with Parker. But after a string of chart-topping successes, Brown’s celebrated band mutinied over professional differences. Parker moved on.

It was the beginning of Parker’s on-again, off-again relationship with the band leader.

In response, Brown formed the J.B.’s, a hot collection of young bloods that included bassist William “Bootsy” Collins and his guitarist brother Phelps “Catfish” Collins. The Collinses left a year later to join funkmeister George Clinton’s psychedelicized funk outfit Parliamentfunkadelic. Parker would join them three years later, but not before switching to alto sax and contributing to such legendary James Brown funk hits as 1972’s “Get on the Good Foot” and 1974’s “The Payback” and “Pap Don’t Take No Mess.”

For the next 20 years, Parker freelanced with Clinton’s P-Funk and Bootsy’s Rubber Band, while periodically reuniting with Brown.

Despite the turbulent times he spent with Brown, Parker expresses no ill feelings toward the legendary soulman. “We recognized what we had together, but along with that comes the recognition that you just can’t stay together 100 percent of the time and there’s a point where you just have to go out and do your own thing,” he concludes. “We are comfortable with that. If something arises where we can do some more projects together, that would be fine, but we’re very comfortable with how we’re doin’.

“But James Brown has his own style. And I have my own style, though I certainly learned from him. Still, I like to keep it hip and keep it funky.”