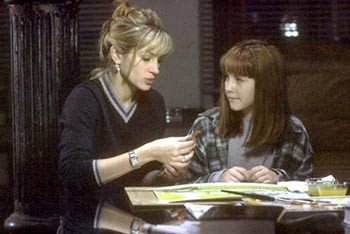 David Templeton takes interesting people to interesting movies in his ongoing quest for the ultimate post-film conversation. This time out, he schedules a session with therapist Felicia Matto-Shepard, a Petaluma-based expert on blended families and stepparenting issues, to see the new comedy/drama Stepmom.

STEPMOTHERS haven’t fared too well on the big screen recently. In 1998, if a stepmom was depicted at all, she was either a nasty, two-faced manipulative Barbie doll–as in Disney’s remake of The Parent Trap–or else she was the classic Brothers Grimm-style monster as in Drew Barrymore’s Ever After: A Cinderella Story, in which Angelica Huston played the part of the unrepentantly wicked stepmother. As a happy ending, she is publicly humiliated and forced into a life of miserable servitude. That’ll teach her.

In the midst of all this stepmother bashing, along comes Stepmom. Starring Susan Sarandon as a divorced mother with two young children, and Julia Roberts as their father’s new fiancée, Stepmom is a flip-flop of the conventional step-story: This time the stepmom is the goodhearted heroine, and the real mom is the sneering, snarling heavy. At least she is until the film’s ending when both characters attain a kind of teary-eyed sainthood. At any rate, to therapist Felicia Matto-Shepard, the appearance of a film like Stepmom is a welcome step in a positive direction.

“I knew right away that I would be seeing this movie,” she says. “I knew a lot of my clients would be talking about it.”

A respected family therapist with an office in Petaluma, Matto-Shepard, herself a stepmother, can claim a certain amount of personal and professional expertise in the area of blended families–and of stepmothering issues in particular. For several years she’s been moderating a stepmom support group with a whimsically apt title: “Wicked No More.” In the course of her work, she’s heard hundreds of horror stories–and a good number of success stories as well–as parents and children struggle to adapt to stepfamily life.

“Forming a successful stepfamily,” Matto-Shepard says with authority, “is always harder than anyone expects it will be. And making things worse is the fact that stepmoms don’t have many obvious role models, and there are no positive pop-culture icons from which to learn.”

So does Stepmom fill the gap? Yes. Sort of. Though overbearingly sentimental and frequently preposterous, Stepmom is successful, Matto-Shepard insists, because buried beneath its slick, sitcom-style facade is a treasure trove of painfully accurate observations. Furthermore, it comes up with a surprisingly optimistic vision of how a blended family can, with effort, regroup to form a healthy, harmonious household.

“It is realistic that these kind of relationships can start out shaky, and mean things can be said between people–and then years later it can be healed,” Matto-Shepard explains to me over tea, immediately after seeing the film. “What was unrealistic was that it only took about three months. Typically, it takes a stepfamily about five years to settle into their roles. By the time you’ve reached five years, everybody pretty much knows who they are and where they fit into the family dynamic.”

IN AN EARLY SCENE, Sarandon goes horseback riding with the kids, and after ridiculing Roberts incessantly–almost begging for the children to join in–she is shocked when her little boy states, “I’ll hate her if you want me to, Mom.”

“How could she be so amazed?” I ask. “After all of her jibes, I think she would have patted him on the back and said, ‘That’s my boy!’ “

“I don’t know that I agree,” Matto-Shepard replies. “When parents are divorced there’s a lot of emotion involved. You lose a lot of your reasoning sense, and you say and do a lot of mean things. And sometimes your kids are like mirrors, reflecting those words and actions right back to you. When he said, ‘I’ll hate her if you want me to,’ she realized for a moment what she was doing, and she was sorry. That’s realistic.

“On the other hand, a little 7-year-old kid is not likely to say that ‘I’ll hate her if you want me to’ to his Mom,” the therapist says. “But he’s likely to feel it. He’ll get the message. ‘Mom doesn’t like her, so if I like stepmom, I’ll be betraying Mom, therefore I’d better protect Mom by hating stepmom.’

“Another thing the film got right was the way Julia Roberts just dives right in there with the kids, taking on too much responsibility too soon. That’s a mistake that a lot of stepmothers make. … It is wise for a new stepmom to be very careful in her entry into the family,” she notes. “You have to develop a relationship with the child first–a connection on some basic human level–before you can take on any real authority.

“The best way a stepparent and a stepchild are most likely to build a relationship with each other is by having lots of little moments together,” Matto-Shepard says. “Like when Roberts offers to show the girl how to paint a tree, or when they’re in the car and Roberts lets her use her lipstick. Bonds are made from little things, like saying, ‘I’m running to the store. Do you want to go with me?’ And then you have a 10-minute chat on the way to the store. That’s how you develop a relationship with your kids.

“The best thing about Stepmom,” Matto-Shepard concludes, “is that it shows–even if not very realistically–that a stepfamily can work. At the very end, Susan Sarandon says, ‘There’s a place for each of us.’ I love that. I believe that’s really true. If kids have four parents, they find a way to have four parents. It works for them. Eventually, everyone finds a way to fit together. Speaking from personal and professional experience, I can say that stepfamilies really can work. They can work incredibly well.”

From the January 28-February 3, 1999 issue of the Sonoma County Independent.