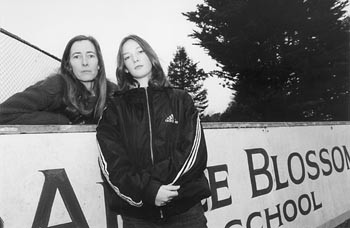 WHEN JACKIE Screechfield dropped off her 13-year-old daughter at Apple Blossom School one day last spring, she noticed a plume of spray coming from a tractor in one of the apple orchards surrounding the Sebastopol middle school. “I could smell a kind of a sharp odor that goes right to your head, and I saw the spray coming off the tractor and right towards campus,” Screechfield says. Could it be, she wondered, connected to whatever was making her daughter and other kids at the school sick that week?

Within minutes the scene turned from a common Sonoma County sight–a farmer rumbling along in a orchard or vineyard–into a major incident with parents, the school superintendent, ambulances, fire trucks, the sheriff’s deputies, and the county agricultural commissioner swarming over the school.

Samples taken that day from Screechfield’s car, as well as sites around the school, tested positive for organophosphates, a class of insect poison whose health effects include headaches and nausea at low exposures, and numbness, seizures, coma, and death at high exposures. Children are usually hit harder than adults.

From an agricultural standpoint, the pesticides found weren’t particularly alarming types or amounts, and are not classified as restricted by the state. But the incident, coupled with her daughter Samantha suddenly developing severe allergies at the end of that week, certainly raised a lot of questions for Screechfield, who spent several months last summer participating in a study monitoring the air around California for evidence of pesticide residue.

The study, released by the Environmental Working Group last week in a 44-page report, “What You Don’t Know Could Hurt You: Pesticides in California’s Air,” found pesticides drifting in the air after spraying in 62 percent of the 26 samples taken in Sonoma County.

The report also estimated that Sonoma County contributes more than a million pounds a year of smog-forming chemicals that evaporate into the air after application of pesticides. The most prevalent pesticide used in the county is sulphur, a common fungicide acceptable for use even in organic farming to combat bunch rot and other grape mildews. But the report also found airborne traces of phosmet and carbaryl, both insecticides.

“This study validates our concern that pesticides often drift beyond property lines to poison the air of our neighborhoods and schools,” Screechfield says.

The report is highly critical of the state’s Department of Pesticide Regulation, calling for Gov. Gray Davis to “clean house” at the department and transfer authority over airborne pesticides to the California Air Resources Board. “All other pollution in the air is regulated by the Air Resources Board, which not only has more expertise, but also has shown a much more aggressive stance in protecting the public,” says Bill Walker, California director of the Environmental Working Group.

“Agriculture exerts such influence that the Department of Pesticide Regulation essentially acts as an advocate for agriculture and an apologist for people who want to use pesticides.”

Veda Federighi, spokeswoman for the Department of Pesticide Regulation, bristles in response to such charges. “The idea that we’re not regulating pesticides and we’re not protecting people, nothing could be further from the truth,” she says. “The Environmental Working Group based this [report] on fewer than one hundred samples from the air. We do hundreds every year.

“We don’t allow pesticides to be used unless they are used safely,” she adds.

Walker agrees that the monitoring study is not comprehensive or authoritative. “We think that’s the state’s job,” he says. Walker points out that the state pesticide agency has never taken air samples of airborne pesticide residue in Sonoma County. Between 1991 and 1995, according to the report, the agency did monitoring 50 times in 14 locations–about one test for every 84,000 pesticide applications in the state.

State spokeswoman Federighi counters that, with the use of technology, there is no need to go to every county in the state. “The area we select for monitoring is the county with the highest use for that pesticide. We pick the month of peak use. That represents the worse case. Then we use computer modeling to estimate what might be found in other areas,” she says.

“We know how the air behaves in Sonoma County. We need data on how pesticides behave generically.”

She adds that the department is not surprised that the study found detectable traces of pesticide in the air in Sonoma County. “All have been well below health concerns,” she says. “The biggest point of disagreement between us and [the Environmental Working Group] is that EWG is saying there’s no level of pesticide that’s safe. What we’re saying is the dose makes the poison. If the exposure is low enough, there is no health effect.”

“Pesticides are expensive and cumbersome and difficult as far as regulations are concerned. Most farmers don’t want to use more than is absolutely necessary,” she says.

But small doses don’t necessarily mean safe doses, according to the report, and it is crucial for the public to receive advance notification of pesticide use–something that is not mandated by state or county regulations. The report calls for 72-hour written notice to all homes, schools, and businesses within 1,000 feet of a field before application of any toxic pesticide.

“It would be a physical impossibility,” says Mike Smith, the county’s assistant agricultural commissioner. “How would you notify everybody? There’s no way of monitoring the whole county to accomplish this.”

Rick Theis, executive director of the Sonoma County Grape Growers Association, echoes that opinion. “Do people call up their neighbors when they put Sevin on their roses? That’s probably more dangerous than sulphur,” he says. “These things are made to be applied in a way that essentially is not a threat to neighbors.”

IN A COUNTY where the suburban population is increasingly bumping up against agriculture, pesticide use boils down to a “good neighbor policy,” Smith says. “We encourage people to communicate with each other.”

Screechfield hopes that policy will work. In talks with the farmers who cultivate land surrounding Apple Blossom School, parents acknowledge that last year was particularly difficult for farmers, with heavy rains necessitating use of high amounts of sulphur and other pesticides to avoid mold and fungus on grapes.

The farmers agreed to notify the school of sprayings, and to do any school-day sprayings before 6 a.m., and the school has purchased a water blaster to wash down playground equipment.

“It’s hard for the farmers. A lot of the fields are addicted to the pesticides, are used to having fertilizer and spray,” Screechfield says. “We’re trying really hard not to create a hostile environment, instead looking for ways for them to move into more sustainable ways of farming, and ways they can move into it without economic hardship.”

The county Agricultural Commission leaves it up to individual growers to decide whether to employ more organic-style farming methods, which use fewer toxic chemicals. Both the Sonoma County Grape Growers Association and the Farm Bureau are pursuing programs and funding to decrease the use of traditional pesticides.

“The problem is there are not a lot of alternatives right now,” James says. “Until we have viable alternatives to pesticides, we don’t want to ban them. They are tools, and can be good tools.”