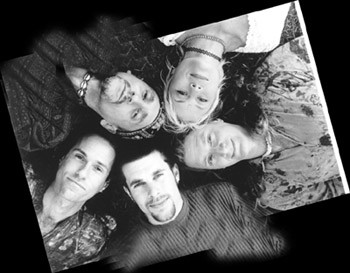 By Rob Pratt and Patrick Sullivan

LOST AT LAST is a hard band to pin down. It’s not just that its sound–a vibrant pairing of techno-trance with tribal chanting and drumming–defies easy categorization. “We’re ancient meets future, a mix of old and new,” explains Om, the group’s programming and synthesizer wizard. No, perhaps the most striking thing about these musicians is the dramatically different impression they make when performing live.

On CD, Lost at Last delivers a classic goa trance sound, a hypnotic mix of Om’s filigreed synthesizer bleeps, Priyo’s textural strings, and Lakshmi’s ethereal, otherworldly chanting. Like most trance, this music has a simple rhythmic undercarriage and little boom factor in the bass.

The band’s live show, however, is a different thing altogether. With set and hand drummers, Lost at Last plays for ritualistic effect, heavy on beats and building tension and cooling down the way a rave DJ spins records to keep up with the ebb and flow of the crowd.

“We want to create music that speaks to all the different levels of one’s being simultaneously, the mind, the spirit, and the body,” Om says. “We want it to be a transformative experience for the listener.”

Part of the genius of Lost at Last is that the group makes computer-driven techno sequences work within the context of a dynamic live band with a penchant for improvisation. Most techno bands playing live treat their set lists and song arrangements as fixed phenomena, having live instruments play along with computer-driven synthesizers or dispensing with performers altogether and simply taking the stage to make tweaks to the gear as songs play out.

With a laptop wired to his keyboards, drum machines and samplers, Om leads live shows in much the same way as early swing-band leaders handled arrangements on the fly. He uses prearranged riffs and loops running on his sequencer, cuing the band part by part.

Lost at Last held its first performance five years ago on the slopes of a volcano in Hawaii. Since then, the band members have bounced back and forth between the islands and Northern California, performing, recording, and searching for enlightenment through music.

The band’s mix of techno music and a jam-band sensibility made them a hit almost from the moment they left Maui for the mainland. With a long-standing hippie-raver underground, the Bay Area was a natural second home for the group.

Lost at Last released a self-produced CD not too long after forming. But this August will see the release of the band’s first major label effort, a self-titled CD from RCA produced by David Tickle, the legendary talent who has worked with Prince and U2.

North Bay fans will get a preview of this new work when Lost at Last takes the stage June 9 at the Health and Harmony Festival’s Techno-Tribal Dance Party, which also sports performances by the likes of Medicine Drum and the Oddvillian Sideshow. This will be the third year the band has performed at Health and Harmony, and Om says the audience gets bigger every time.

“Our show [at Health and Harmony] last year was one of the best shows we’ve ever done,” Om says. “I’m hoping that same energy continues this year.”