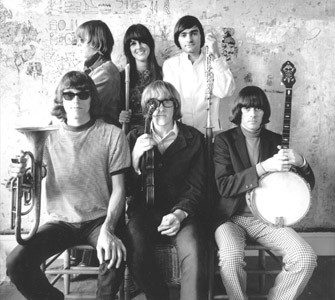 “YOU KNOW, I sort of revolt at the use of that term ‘psychedelic’ because it limits everything so much, and it’s really not what the ’60s was all about,” says Paul Kantner, co-founder of the Jefferson Airplane, sounding mildly peeved during a phone interview from his San Francisco home. “It’s like the focus on drugs by the government and other facilities of those times making such a big deal out of it. In reality, drugs and psychedelia were a very small part of those times, sort of like a very tasty dessert at a great dinner. It was just part of the process, and the drugs were often simply a flag to wave in the establishment’s face.

“In fact, there was a newness and a passion for that newness that really signified those times.”

The 60-year-old Kantner, who learned to question authority early in life as a kid at a Catholic military boarding school, had no trouble taking up the banner for the then-emerging counterculture. And his rallying cry resonated first on Surrealistic Pillow (RCA), the Jefferson Airplane’s 1967 acid-rock masterpiece released at the height of the Summer of Love.

“Somebody dragged me into this one,” says Kantner laughingly, adding that last year the band re-created 1969’s breakthrough Volunteers album on stage. “So we do it along with a body of older and newer works, and apparently it works pretty well.

It’s worth recalling he significance of the 1967 Jefferson Airplane–guitarist Kantner, vocalists Balin and Grace Slick, guitarist Jorma Kaukonen, bassist Jack Casady, and drummer Spencer Dryden–and their psychedelic landmark Surrealistic Pillow, an album that holds up amazingly well after all these years. “The band boasted a lineup none of its peers could match . . . ; it was the fertile exchange of diverse styles and ideas among the members that produced a vision darker and deeper than any other in acid rock,” wrote music critic Paul Evans in the Rolling Stone Album Guide.

Slick, then newly recruited to take over for the pregnant Signe Anderson, was responsible for a large part of that success. Indeed, her commanding presence on “White Rabbit,” in which she chillingly instructs the listener to “feed your head,” exhibits an icy Wagnerian force unparalleled in ’60s rock. It was a powerful performance that landed her a spread in Life magazine.

“Her singing made [Slick] the counterpart of San Francisco’s other reigning diva, Janis Joplin,” Evans notes. “Where Janis was raw blues urgency, her persona combining the toughness of a biker’s mama with the pathos of a strayed waif, Slick was queenly, stentorian, her voice an instrument of almost operatic authority and her beauty dark, mysterious, and remote.”

On the strength of Slick’s singing, Surrealistic Pillow–which spawned the Top 10 singles “Somebody to Love” and the anthemic “White Rabbit,” and sold more than a half million copies–became responsible for cracking open Top 40 AM radio, allowing acid rock to flow into the cultural mainstream.

The band had hit its stride. American music would never be the same.

“We were just going into the studio and playing some music,” Kantner says of the album’s fruitful recording sessions. “You don’t really have any sense of that when you’re doing it. There was no plan or thought or realization that anything special was really going on.”

SIX MONTHS after the release of Surrealistic Pillow, the Jefferson Airplane took a sharp commercial detour, releasing the wildly experimental After Bathing at Baxter’s–described by one critic as “a great big fuck you to the recording industry.”

“It can get a little chaotic and anarchic every now and again, but in the long run there’s a certain heat and passion there that comes out of that friction and makes for exciting musical moments,” Kantner concludes. “Baxter’s was a very experimental album–total anarchy. That was the nature of the times. As Bay Area residents often do, we went over the line. But that’s what experimentation and exploration is all about. I mean, explorers don’t go out and walk down well-cut pathways. They find a new forest and blaze a new trail. In that sense we were breaking free from the studio system and the whole music business and stating our own purpose and place in it, however chaotically.

“[Baxter’s] was a total failure in many ways, but there also was a certain freedom that helped resolve itself in future albums.”