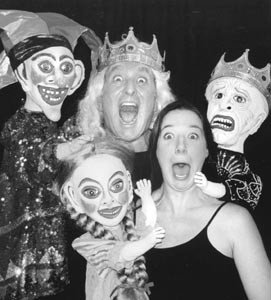 “A PESTILENT GALL!” Shakespeare purists may cry upon seeing Fred Curchack and Shannon Kearns’ riveting redux of King Lear, the Bard’s paean to family dysfunction–brought to Petaluma’s Cinnabar Theater as Lear’s Shadow. But what fools they would be! This “Daddy Dearest” is a sublime theatrical alchemy of acting, video, movement, puppetry, original texts, and profound invention.

Depicted as the lunatic musings of a salty theater impresario with a waning memory, Lear’s Shadow is cast over a professional and romantic relationship that shipwrecks on an unanticipated pregnancy. When the cigar-gnawing Scully (one of several roles exquisitely executed by Curchack) learns that his collaborator and lover, Binky (played with tragic allure by Kearns), is pregnant, he forbids her to have a child for fear of losing their investment in a staging of King Lear.

Curchak and Kearns use this Chinese-box device like a booby trap to ensnare their audience in a web of verisimilitude and artifice that delightfully confounds even as it explores to the hilt the myriad relationships that might exist between a man and a woman.

Imagine Jorge Luis Borges’ short stories onstage, with a tip of the hat to Broadway golden boy Bob Fosse’s autobiographically inspired All That Jazz. Then mix in equal parts Monty Python and Antonin Artaud and down it all with a Woody Allen chaser and you have a fair approximation of the intoxicating delights of Lear’s Shadow.

Curchack’s Cinnabar appearances are usually one-man atomic explosions, but this time he is aided and abetted by an accomplished accomplice–the equally combustible Kearns. No mere magician’s assistant, Kearns proves she is more Curchack’s partner than protégé–she offers a canny cocktail of talent, verve, and a chameleonlike ability to transform absolutely into her various characters. The stage-borne magnetism that crackles between her and Curchack is one of the production’s greatest assets.

Lear’s Shadow brims with Curchack’s characteristic one-liners, as when he croaks, “I still give myself a hard-on!” while watching himself dressed in drag as one of Lear’s daughters in a projected “rehearsal video.”

Throughout, Curchack and Kearns create compelling stage-pictures: for instance, Kearns (as Lear’s wayfaring daughter Cordelia) crosses her shadow into a projected close-up of the caterwauling Lear’s gnashing teeth. The interplay between video and live action (a mainstay in Curchak’s solo work) also includes slapstick bits that are feats of comic timing.

By far the most haunting (and hilarious) image appears when Binky, lamenting her unborn children, cries, “They keep trying to be born and we keep killing them,” while a pair of skull-headed kewpie-doll puppets with pink and blue wings chirp, “Mama, Dad-da.” Kearns belts out an earsplitting scream, and the scene is burned indelibly into one’s memory.

Lear’s Shadow is an inspiring experiment that buoys the soul while illustrating its limitations. As a character counsels, “We that are young will never see so much or live as long.” But no worries, theatergoers, Curchack and Kearns have brought the Cliff notes.