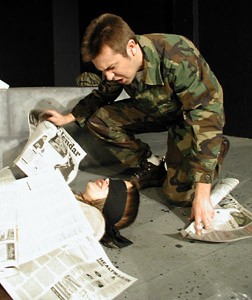 On the War Path: Dan Saski and Bonnie Jean Shelton fight it out.

‘Kuwait’ serves up truth and consequences

In wartime, truth is so precious that she should always be attended by a bodyguard of lies,” Winston Churchill once said. It may have been the only point on which the British bulldog would have agreed with Joseph Goebbels, Nazi propaganda minister and master of the big lie.

Such notions are taken to their logical conclusion by a character in Kuwait, now onstage at Sonoma County Repertory Theatre. In the play, someone asks a noted war correspondent if she likes telling the truth. “That,” the reporter says firmly, “is not my job.”

Is it coincidental that a drama about the first Gulf War hits the stage just as Gulf War II heats up? Probably not. But anyone imagining that Kuwait represents mere opportunism on the part of SCR will be quickly brought around by the above-average quality of playwright Vincent Delaney’s script. Political theater has a terrible reputation, but Delaney’s very political play, which took top honors at SCR’s New Drama Works Festival, avoids most (though not all) of that genre’s common mistakes.

The plot is a fairly deft piece of misdirection. The play, directed by Eric Thompson, opens with two characters onstage: a blindfolded and handcuffed American journalist named Rachel (Bonnie Jean Shelton), and her guard, a stern U.S. soldier (Dan Saski). The reporter’s crime? She went AWOL, breaking the strict rules of the pool coverage system set up by the Pentagon publicity machine. Captured while looking for real news in restricted territory, Rachel is now being interrogated by her captor.

But the soldier, who says his name is Joe, turns out to be something more interesting than a babysitter for wayward journalists. Citing a military emergency, he suddenly yanks Rachel out of her cell and takes his blindfolded captive on a bizarre and dangerous trip through the desert.

The playwright’s best move was keeping his cast small. Only four good actors are needed to stage this play, and SCR found them. Shelton’s bound hands hardly handicap her expressiveness: she manages to vividly portray her alternately frightened and ferocious character. Saski delivers almost as good a performance as the journalist’s mysterious and mercurial captor.

The plot is filled out by another duo: a military publicity officer facing off against a ruthlessly ambitious journalist who could be seen as Rachel’s evil twin. As these two do their dysfunctional dance through the press conferences that punctuate the play, Maria Giordano and Jessicah Larson achieve a nice comedic rhythm.

In fact, comedy plays a key role in making this play something more interesting than a screed against military doublespeak and lap-dog journalism. Delaney makes political points, but he tends to make through humor and plot development instead of preaching.

Kuwait does sound some false notes. Among the most serious come when the play’s characters act in jarringly implausible ways that seem mainly calculated to advance the plot or nail a punch line. For instance, playgoers may have a tough time imagining any blindfolded woman, even a brassy journalist, making as many sexy bondage jokes with her menacing captor as Rachel does with Joe. And would any ambitious journalist really tell a military official, “This war is funding my 401k”?

Still, for an original drama debuting at a community theater, Kuwait is remarkably good. And as the propaganda war waxes in the real world, this play’s concern with the flesh-and-blood consequences of lies couldn’t come at a better time.